Detroit: From riot to resurrection 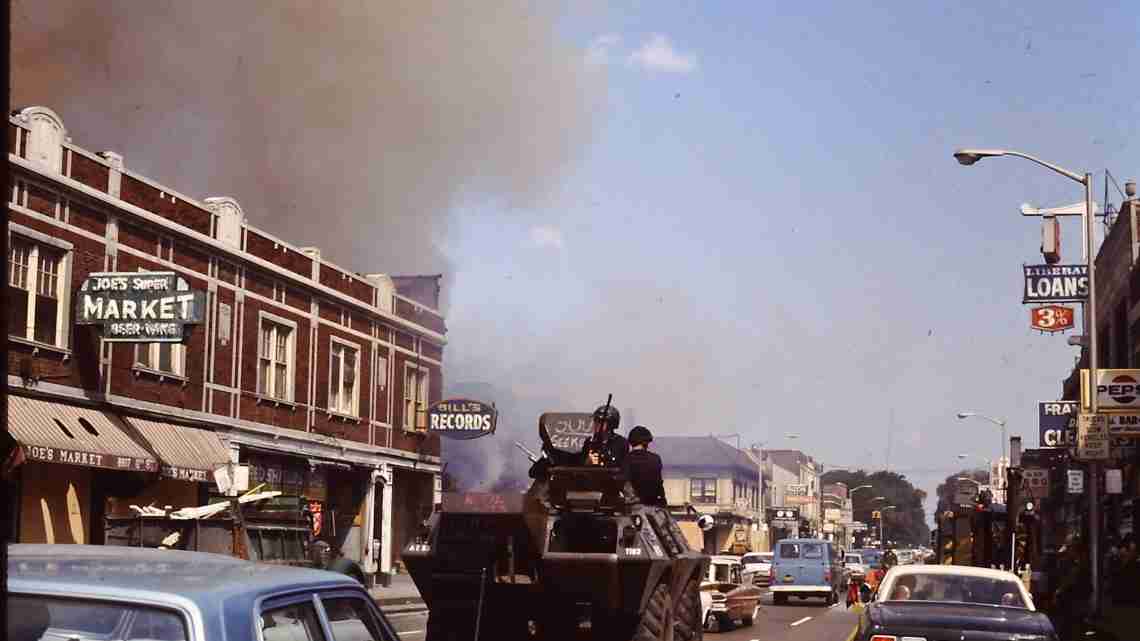 DETROIT – Deborah Chenault Green, 62, is a writer. But 50 years ago she was a preteen, sleeping on the porch to escape the oppressive heat, awakening to see a sky that glowed unnaturally.

Azerine Jones is a retired baker. But in 1967 she was the 12-year-old daughter of a barber who watched his business go up in smoke.

Girard Townsend is 66 now, living in a seniors building near the Detroit waterfront. But a half century ago, he was just a kid on a city bus.

The bus stopped near 12th and Clairmount streets. Townsend stepped off – and into the very start of the Detroit riot.

“I saw all these guys with masks and shields,” he said city police officers, most of them white, far outnumbered by a seething black crowd.

In the days that followed, he would witness – and take part in – an epic eruption of violence that still reverberates in his life and the life of this city.

Five days of violence would leave 33 blacks and 10 whites dead, and more than 1,400 buildings burned. More than 7,000 people were arrested.

A decline that had already begun would accelerate; Detroit was the nation’s fourth biggest city in 1960, but would rank 21st by 2016. The middle class fled, and a proud city fell into poverty, crime and hopelessness.

There are signs of rebirth in Detroit. But the men and women who lived through the riots are getting older, and most doubt they will live to see Detroit reclaim its former glory, when its very name was synonymous with American know-how and industry.

“Detroit still hasn’t come back to where it was,” Townsend said sourly, sorting through 50 years of memories.

Detroit wasn’t the first of the riots in the summer of 1967, and it was far from the last. Buffalo, New York and Newark, New Jersey, preceded it; in the course of the summer, more than 150 cases of civil unrest erupted across the United States.

Detroit’s started after a July 23 police raid on an illegal after-hours’ club – a “blind pig”- at 12th and Clairmount.

The raid, though, was just the spark. Many in the community blamed frustrations blacks felt toward the mostly white police, and city policies that pushed families into aging and over-crowded neighborhoods.

“We had a fear and kind of a hatred toward the police department,” Green said. “They would harass people, especially young black men. Stop them for no reason.

A lot of men and women were beaten.” “Detroiters felt that the police department was an army of occupation” said Reverend Dr. Wendell Anthony, Pastor of Fellowship Chapel and President, Detroit Branch NAACP. “The Big 4, known throughout the black community, made up of four police officers patrolling through the neighborhoods were often viewed as instruments of harassment and intimidation”Anthony continued.

When Gerard Townsend got off the bus that night, he stumbled into the immediate aftermath of the blind pig raid. By the next day, the riot was in full bloom: “I got up the next morning and the whole west side was on fire. Everything was burning. People were running around with clothes in their hands, TVs and all kinds of stuff.”

Townsend was among them. He made off with a television from a furniture store.

There is general agreement that the rioters did not focus their fury on whites.

Theresa Welsh and her husband, David, rented an apartment early that summer about eight blocks from where the riot started. “Nobody bothered us. We were a couple of white people wandering around,” said Welsh, 71.

Deborah Chenault Green recalls she was at a cousin’s home. They slept on a mattress on the porch because it was such a hot night.

“The noise, I think, is what woke us up,” she said. “You could hear cars and people and police sirens. I looked in the sky and I saw red. There was looting. It was mayhem everywhere. Everybody was just going crazy.”

National Guard tanks and other armored vehicles rumbled through the streets. There were reports of snipers firing on law enforcement, the National Guard and even firefighters from rooftops and other secreted spots. Authorities fired back.

The city lost more than 2,000 shops to fires or looting, many of them owned by blacks. Among them was the barbershop on Warren Avenue owned by Azerine Jones’ father.

“They were burning some of everything,” she said “It wasn’t a matter of them saying this was white-owned or black-owned. Stuff just got caught on fire.”

When the smoke cleared and the military rolled out, Detroit stood bruised and battered.

“A lot of the fires may have started in white-owned business and spread,” Green said. “A lot of black businesses were destroyed. A lot of people had jobs in those shops. The majority of them didn’t reopen.

After the riot, it looked like a war zone and the burnt smell still lingered.”

Jones said her father never rebuilt his barbershop. He took on other jobs after the riot.

“Owning your own business as a black in the 1950s and `60s was an accomplishment in itself,” she said.

“Before the riot it was a really good comfortable neighborhood,” added Jones, who now lives west of Detroit in Farmington Hills. “We had the things that we needed there: A theater, a butcher shop, dairy shop, shoe store. Since my mother didn’t drive it was nice having everything in walking distance. That’s what really got us when they burned everything down. She had to take a bus with the groceries. It just really killed everything.”

In the end, it was Detroiters hurting themselves, she said.

“The silly people who did this didn’t really realize they were burning down their neighborhoods,” Jones said. “The (white) business owners were able to pick up and go somewhere else. The people who lived there lost a lot. We lost a lot.”

The departure of white residents and businesses to the suburbs that had started years earlier accelerated. Between 1970 and 1980 more than 400,000 more people would leave.

“Some white people were rooted in Detroit,” Townsend said. But after the riot, “they moved out. They didn’t want to be here anymore.”

After the riot, David Welsh took a job as a photographer in a town just north of Detroit. He and his wife moved from the riot zone.

“It didn’t make sense for us to be down there anymore, all things considered,” said Welsh, 74. “We didn’t feel comfortable there anymore.”

The couple would move to other parts of the city and eventually settled north of the city limits.

So did many middle-class blacks. Altogether, Detroit’s population has fallen by about 1.1 million people since the 1950s.

Even as the Motor City was diminished, Murder City grew. More than 700 homicides were committed in 1974.

Within a decade of the riot, the car plants that provided jobs and helped keep the city running were hiring fewer people. Three years after the riot, Detroit’s unemployment rate was just over 7 percent. It reached 25 percent by 1990.

Green was hired by Chrysler in 1978 to work on one of the automaker’s assembly lines.

Today, nearly four in 10 Detroit residents live in poverty compared to about 15 percent nationally. The city’s $26,000 median income is less than half of the national figure.

Now, two years out of insolvency and free of billions of dollars of debt, Detroit is working to fix up its battered neighborhoods and its image.

Though more than twice the national number, unemployment is down to 11 percent. Downtown is thriving and some nearby neighborhoods are filling up. The city, 80 percent black, even elected Mike Duggan, Detroit’s first white mayor since the 1970s.

The population is leveling out at around 670,000 people and families are taking advantage of special home buying programs through the city’s land bank.

“We’re in the first period of growth in 50 or 60 years – people are moving back,” Duggan recently told business, philanthropic and elected leaders at a statewide policy conference. “Our principle is this: It’s one city for all of us.”

To get there, Detroit has had to correct mistakes of the past that led to the 1967 riot and eventually bankruptcy.

Duggan said many of those decisions were “rooted in racial discrimination” and included forcing poor black residents into ever smaller areas where housing stock already was aging or substandard. Loans backed by the federal government allowed whites to buy homes in the suburbs in the years leading up to 1967.

“Few loans were given to blacks to buy or improve houses in Detroit,” Duggan said.

But some who lived through the riots say any progress will not wipe away their distress in those five days of violence, and in the 50 years that followed.

“Today, many Detroiters witness the resilience of the city and the unyielding hope for its future” said Marvin Beatty, vice president of community and public relations for Greek Town casino and a Detroit developer. Beatty continued, “If the resilience of Detroit of truly at hand, the bright spots of downtown and mid-town must be extended to the neighborhoods. The time is now for bold decisions to be made by downtown and community leadership as partners for a better tomorrow.”

Next post Yes, you can buy happiness - if you spend it to save time