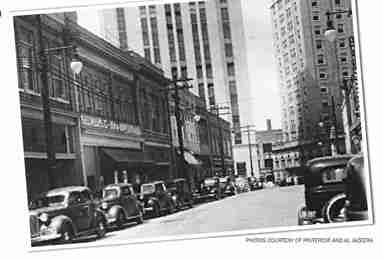 DURHAM — Around the turn of he century, the Bull City was a thriving center for African American business activity.

Charles Blackmon has worked for NC Mutual for nearly 40 years. He’s an expert on the company’s history, a history that goes back to a time when Durham’s Wes Parrish Street was known nationwide as the “Black Wall Street.”

“There was nowhere else to turn to,” Blackmon said. “We had to develop methods to help ourselves, but that was just part of the bitter struggles that we’ve had to overcome. And it’s not something we’re proud to have overcome, but we’re glad we were able to do so.”

Despite the segregation and discrimination faced by so many in the early 1900s, blacks in Durham enjoyed the highest per capita income, and the highest rate of home ownership, in the country.

For the first half of the 20th century, the area earned Durham the nickname “the Capital of the Black Middle Class.”
Even though the street is no longer a nationally recognized financial center for the African American community, many who work here today are well aware of its history and heritage.

Attorney Butch Williams runs a thriving law practice on Parrish Street. He says the founding fathers of the “Black Wall Street,” who came here so many years before him, weren’t bullish on just the Bull City.

“It didn’t just stop in Durham,” Williams says, “it spread its influence all across the United States and it inspired numerous generations of young folk, black and white, as to what you could do pooling your resources.”

The first home of North Carolina Mutual still stands on Parrish Street. The bank houses an exhibit on “The Black Wall Street of America, which is open to the public.

• Walk-ins are accepted, but scheduled tours are preferred.

Mechanics and Farmers Bank is still in its original location, but not for much longer. The bank has just announced it will move to a new building outside the downtown area.