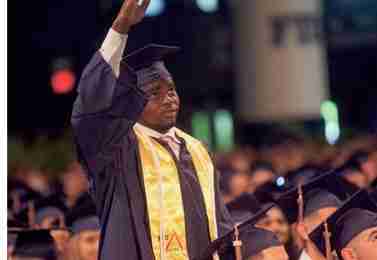 MIAMI – Tiffany Gomez, 27, and her twin sister Eileen begin their days in the kitchen of Vito’s Bakery in Virginia Gardens, preparing pastelitos, tostadas and empanadas. Baking is in their blood; it is how they remember their father and continue his longstanding legacy. The twins’ mother passed away when they were four years old, and they were raised by their single father, Vito. When he was diagnosed with a terminal illness and passed away in 2014, the college students became bakers and business owners.

Balancing school and the business was a challenge, but Gomez was determined to never give up her dream or her promise to her father to finish her degree. On Monday, Dec. 12, Gomez graduated with her bachelor’s degree in psychology. Eileen, who graduated from FIU in 2013, but couldn’t attend the ceremony because her father was too ill at the time, will walk across the stage with her sister.

Gomez is among more than 4,900 FIU graduates this semester. Their accomplishments were celebrated in nine ceremonies Dec. 11, 12, 13 and 14 at Florida International University’s (FIU) Arena on the school’s Modesto Maidique Campus, 11200 SW 8th Street in West Miami-Dade.

“This class is full of change makers – some have overcome tremendous hardships and obstacles – and they now have the skills they need to compete in the job market and build a better future for South Florida and beyond,” said President Mark B. Rosenberg. “Every student who crosses the commencement stage represents the impact that we have on the future.”

Jeffee Alexandre is one of those students. Born in Haiti, Alexandre moved to the U.S. at the age of nine following his mother’s death, accompanied by his father and five siblings.

His father worked two jobs to support the family, but more help was needed, so Alexandre began working at a dollar store in the Opa-locka Hialeah Flea Market when he was 12.

He worked weekends throughout middle school and most of high school, stocking merchandise on shelves and unloading trucks as well as handling sales and customer service.

Inspired by his father’s dedication and determined to do better, Alexandre enrolled at FIU, studying full-time while working as a full- time sales associate at Walmart.

At FIU, Alexandre was a member of the Association of Latino Professionals for America, an organization dedicated to enhancing opportunities in the business, accounting, finance and related professions. He participated in the organization’s recruitment and mentorship committees, guiding students academically on their path to success. He was also a member of Techgroup and Toastmasters at FIU Business.

Alexandre said he was honored to have his years of hard work be recognized. “To be a Worlds Ahead graduate means the world to me. I’m grateful and honored to receive this award. This represents the sleepless nights, the hard work and dedication, the class presentations and determination. This graduation represents the core value that I live by because I’m a ‘PHD.’ I’m Poor, Hungry and Driven,” Alexandre said. “This graduation signifies blood, sweat, and tears to me. Coming from where I’m from as a first generation graduate, with little to no supervision; It represents a milestone of achievement for my family and guidelines for my little brothers and sisters.”

Alexandre’s post-graduation plans include taking the GMAT exam and pursuing a MBA through Harvard Business School’s 2+2 Program, a deferred admission program for students who enroll after working for two years.

Other outstanding graduates include: Joseph Sanchez, 34, who suffers from cerebral palsy and Crohn’s disease and has undergone 18 surgeries on his eyes, legs and abdomen. One surgery forced him to stay home for a year to recover. After he took an introductory recreational therapy class, he discovered a new career path, where he could have a hands-on role in helping people like himself overcome disabilities. Sanchez received his bachelor’s in recreational therapy.

Jorge Cisternas, 26, always knew he wanted to be an engineer, but he never dreamed he would end up working with airplanes. A natural leader, he served as president of the Aerospace Engineering Club and senator in the Student Government Association. Through an internship at Lockheed Martin, a global aerospace, defense and security company, he received an offer for a full-time job. In January, he’ll start with the company as a systems engineer. Cisternas received his bachelor’s degree in mechanical engineering.

Serena Cruz spent 14 months researching the lives of female sex workers in the slums of Kampala, Uganda. During that time, she was robbed, hospitalized for a parasitic infection, and threatened by pimps, former female sex workers, and even the local police. Cruz persevered and completed groundbreaking research that has major implications for the fight against AIDS in Africa. She received her Ph.D. in international relations.

Dr. Smith Joseph, the mayor of North Miami, served as the commencement speaker on Monday.