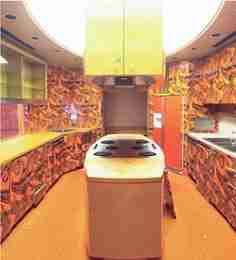 Historic designation is sought for the Ebony and Jet magazine test kitchen.

CHICAGO – A historic preservation organization is working to preserve the kitchen where Ebony magazine tested recipes for its monthly feature “A Date with a Dish.”

Landmarks Illinois says it recently acquired the test kitchen and materials for $1. The kitchen was disassembled and removed from the former headquarters of Johnson Publishing Company. The organization wants to save the kitchen for future display or reuse.

The landmark building along Chicago’s Michigan Avenue is the former home of both Ebony and Jet magazines, which shared inspiring stories of African-Americans. The company sold the building in 2010. A developer plans to convert the offices into apartments.

Landmarks Illinois President and CEO Bonnie McDonald calls the kitchen a “culturally significant piece of history from the country’s most influential African American publisher of its time.”