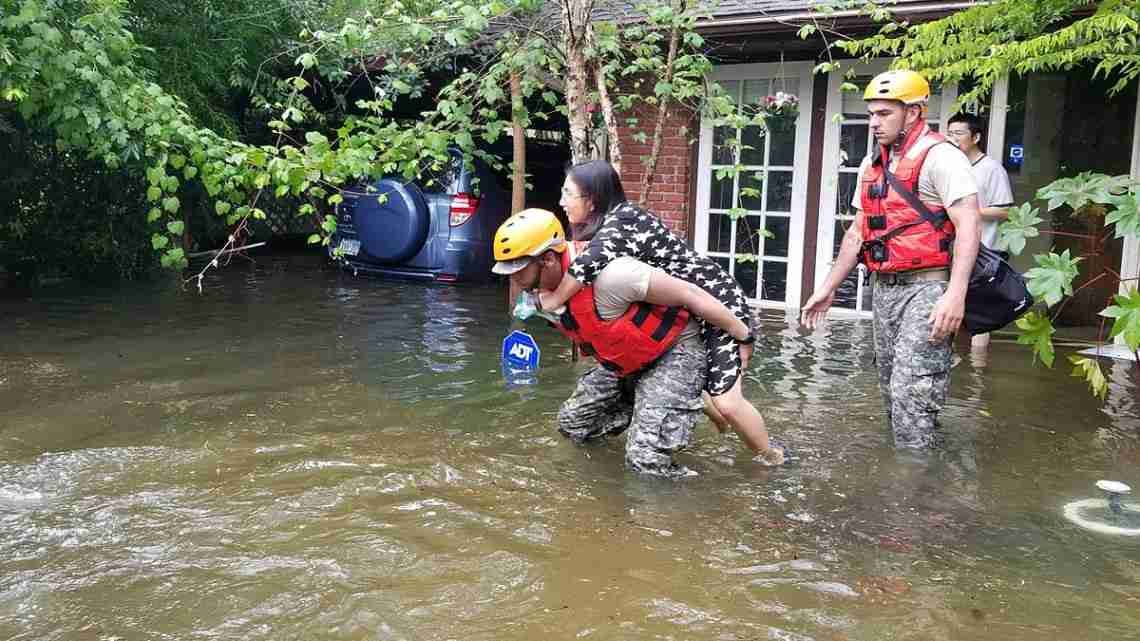 Texas National Guard soldiers help a woman in a heavily flooded area of Houston, Texas  from the storms of Hurricane Harvey.

CORPUS CHRISTI, Texas (AP) – Hurricane Harvey rolled over the Texas Gulf Coast on Saturday, smashing homes and businesses and lashing the shore with wind and rain so intense that drivers were forced off the road because they could not see in front of them.

The fiercest hurricane to hit the U.S. in more than a decade spun across hundreds of miles of coastline where communities had prepared for life-threatening storm surges – walls of water rushing inland.

The mammoth system made landfall late Friday about 30 miles (48 kilometers) northeast of Corpus Christi as a Category 4 storm with 130 mph (209 kph) winds. It gradually weakened over several hours to Category 1 but remained destructive, with sustained winds of 90 mph (144 kph).

No deaths were immediately reported. High winds kept emergency crews out of many places, and authorities said it could be hours before emergency teams are able to fully assess damage.

Aside from the wind and a storm surge of up 12 feet, the hurricane posed a grave risk of flooding, with a potential to hug the coast for days and drop as much as 40 inches of rain on dangerously flood-prone flatlands.

By dawn, nearly 300,000 consumers were without power in the coastal region, and nearly 20 inches (0.5 meters) of rain had fallen in some places.

The mayor of Rockport, a coastal city of about 10,000 that was directly in the storm’s path, said his community took a blow “right on the nose” that left “widespread devastation,” including homes, businesses and schools that were heavily damaged. Some structures were destroyed.

Mayor Charles “C.J.” Wax told The Weather Channel that the city’s emergency response system had been hampered by the loss of cellphone service and other forms of communication.

About 10 people were taken to the county jail for treatment after the roof of a senior housing complex collapsed, television station KIII reported.

On Friday, Rockport Mayor Pro Tem Patrick Rios had offered ominous advice, telling the station that people who chose not to evacuate should mark their arm with a Sharpie pen, implying that the marks would make it easier for rescuers to identify them.

In the storm’s immediate aftermath, the Coast Guard sent two helicopters to try to rescue the crews of three tugboats reported in distress in a channel near Port Aransas.

Trump commended the head of the Federal Emergency Management Agency for his handling of the hurricane.

In a tweet Saturday morning addressed to FEMA head Brock Long, Trump said: “You are doing a great job – the world is watching! Be safe.”

In a separate tweet, Trump said he is monitoring the hurricane closely from Camp David. “We are leaving nothing to chance. City, State and Federal Govs. working great together!”

The president also tweeted, “We have fantastic people on the ground, got there long before (hash)Harvey. So far, so good!”

Harvey’s approach sent tens of thousands of people fleeing inland, hoping to escape the wrath of a menacing storm that threatened not only the coast but a wide swath of Texas that is home to oil refineries, chemical plants and Houston, the nation’s fourth-largest city.

In Corpus Christi, the major city closest to the storm’s center, wind whipped palm trees and stinging sheets of horizontal rain slapped against hotels and office buildings along the seawall as the storm made landfall.

Daybreak revealed downed lamp posts and tree limbs and roof tiles torn off buildings. The city’s marina was nearly unscathed, save an awning ripped from a restaurant entrance and a wooden garbage bin uprooted and thrown.

On along Interstate 45 leaving Galveston, motorists had to stop under bridges to avoid driving in whiteout conditions.

Fueled by warm Gulf of Mexico waters, Harvey grew rapidly, accelerating from a Category 1 early Friday morning to a Category 4 by evening. Its transformation from an unnamed storm to a life-threatening behemoth took only 56 hours, an incredibly fast intensification.

Harvey came ashore as the fiercest hurricane to hit the U.S. in 13 years and the strongest to strike Texas since 1961’s Hurricane Carla, the most powerful Texas hurricane on record.

Before the storm arrived, property owners raced to nail plywood over windows and fill sandbags. Steady traffic filled the highways leaving Corpus Christi, but there were no apparent jams. In Houston, where mass evacuations can include changing major highways to a one-way vehicle flow, authorities left traffic patterns unchanged.

Just hours before the projected landfall, the governor and Houston leaders issued conflicting statements on evacuation.

After Gov. Greg Abbott urged more people to flee, Houston authorities told people to remain in their homes and recommended no widespread evacuations.

In a Friday news conference that addressed Houston officials’ decision to not have a voluntary or mandatory evacuation, Houston Mayor Sylvester Turner said there might be a “greater danger” in having people who don’t need to be evacuated on roads that could flood.

Harris County Judge Ed Emmett said that because the hurricane was not taking direct aim at Houston, the city’s primary concern was heavy flooding.

“We are not having a hurricane,” said Emmett, the top elected official for the county, which encompasses Houston. “We are having a rain event.”

At a convenience store in Houston’s Meyerland neighborhood, at least 12 cars lined up for fuel. Brent Borgstedte said this was the fourth gas station he had visited to try to fill up his son’s car. The 55-year-old insurance agent shrugged off Harvey’s risks.

“I don’t think anybody is really that worried about it. I’ve lived here my whole life,” he said. “I’ve been through several hurricanes.”

Scientists warned that Harvey could swamp counties more than 100 miles (161 kilometers) inland and stir up dangerous surf as far away as Alabama and the Florida Panhandle, 700 miles (1,126 kilometers) from the projected landfall. It may also spawn tornadoes.

All seven Texas counties on the coast from Corpus Christi to the western end of Galveston Island ordered mandatory evacuations from low-lying areas. Four counties ordered full evacuations and warned there was no guarantee of rescue for people staying behind.

State officials said they had no count on how many people actually left their homes.

The last Category 4 storm to hit the U.S. was Hurricane Charley in August 2004 in Florida. Superstorm Sandy, which pummeled New York and New Jersey in 2012, never had the high winds and had lost tropical status by the time it struck. But it was devastating without formally being called a major hurricane.

Harvey is the first significant hurricane to hit Texas since Ike in September 2008 brought winds of 110 mph (177 kph) to the Galveston and Houston areas, inflicting $22 billion in damage.