Heat wrapup: For Heat, a summer of waiting on Bosh now arrives 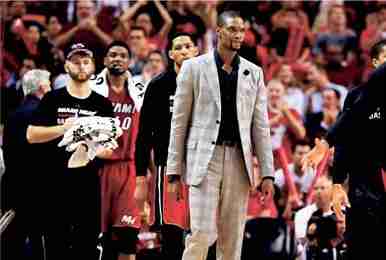 MIAMI – Players and coaches gathered Tuesday for the Miami Heat annual end-of season team meeting, after which the attendees started scattering in all directions for the summer. Some are certain to be back next season. A few others have decisions to make on their futures.

Then there’s Chris Bosh, still squarely in basketball limbo. And the questions that hovered over the Heat for the last three months of the season remain unanswered now as the off-season begins – when, or if, will the All-Star forward whose last two seasons have ended prematurely because of blood clots be back on the court?

It’s the biggest unknown for Miami going into the summer, an unsettling capper to a season where the Heat achieved most of what was on their to-do list when camp began. They got another great year – a bounce back of sorts – from Dwyane Wade, developed Hassan Whiteside into a dominant big man, got out of the luxury tax and saw rookies Josh Richardson and Justise Winslow show they could handle what the NBA throws at players.

“I wish we could have gotten a 100 percent chance, a full chance, to see what we could do,” Wade said. “With what we had, we fought tooth and nail. … We exhausted all possibilities. We did everything we possibly could.”

The season ended Sunday with a Game 7 loss at Toronto in the Eastern Conference semifinals, a series where the Heat ran out of steam. Bosh’s last game was in February. Whiteside missed the last four games of the series after departing early in Game 3 with a knee injury. Out of desperation the Heat went to a small lineup for Games 6 and 7, and even that wasn’t enough to get Miami into a showdown with LeBron James and Cleveland in the East finals.

So now it’s summertime. If nothing else, this season lasted a month longer than last season did for Miami.

“Another step in the right direction,” Wade said. Wade turns 35 next season, his 14th in the NBA. He’ll be a free agent again this summer, the length and value of his next contract probably directly tied to what Miami can pull off in its quest to keep Whiteside and lure more help to the team. Miami is very likely to pursue Kevin Durant when he hits the market. If James wants to return, Miami would listen. Incumbents like Luol Deng and Udonis Haslem want to be back in Miami as well.

There are countless what-if scenarios.

But without some sort of clarity on Bosh, it’s going to be tough for Miami to move forward. Bosh hasn’t provided any update on his condition in months, and it’s unknown if he’s still dealing with clots or if he remains on blood thinners.

“I feel very badly for CB because I know how much this game means to him, and I think everybody knows how much CB means to me,” Heat coach Erik Spoelstra said. “I really miss CB. That’s why this team was able to get to this point, they never made excuses, and they never felt sorry for themselves. Developed a real grit and toughness out of that.”

Barring trades, Goran Dragic, Josh McRoberts, Winslow, Richardson, Briante Weber and Bosh are the only players that will be under contract going into the July 1 start of free agency. Whiteside will be getting a massive raise from someone; it’s unclear if Miami can afford to give him the absolute maximum – and in turn, it’s also unclear if Miami can afford not to given the uncertainty surrounding Bosh.

Beno Udrih expressed interest in being back with the Heat before he was waived late in the regular season, Joe Johnson said when he chose Miami in February that he was intending to be with the team for more than just the 2015-16 conclusion, Dorell Wright wants to stay and Amar’e Stoudemire showed at times why Miami wanted him last summer. Bring on the off-season.