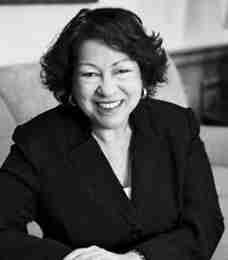 ANN ARBOR, Mich. – U.S. Supreme Court Justice Sonia Sotomayor on Monday said increasing diversity on college campuses is a key to diversifying society at large, noting that the number of black students at the University of Michigan is a “real problem.”

Sotomayor received an honorary degree and participated in a forum about the future of university communities as part of a series of events celebrating the University of Michigan’s bicentennial. Her visit occurred about three years after she wrote a vigorous dissent in a Supreme Court decision that up- held the state of Michigan’s ban on race in college admissions.

Sotomayor, the first Hispanic on the Supreme Court and daughter of Puerto Rican-born parents, was asked by a moderator what a university will need to look like in the years ahead to be inclusive and innovative.

“It’s going to look a lot like Michigan,” she said to applause, “but with even greater diversity.” The percentage of black undergraduate students at the University of Michigan has been pretty steady in recent years at less than 5 percent. Hispanics are 5.5 percent. White undergraduates are 65.4 percent.

The U.S. is “making large improvements toward” an equal society, Sotomayor said, but “we’re still far from it.”

“When you look at the number of African- Americans at the University of Michigan – um, there’s a real problem,” she said. “And why is diversity important? … For me, the answer is quite simple: It’s because until we reach that equality in education, we can’t reach equality in the larger society. It starts here and it ends here.”

“You need to figure out how you engage everyone in receiving that quality education,” she said.

Michigan voters in 2006 said race couldn’t be used as a factor in admissions at public universities. In 2014, the Supreme Court ruled that the constitutional amendment was legal.

A university spokeswoman, Kim Broekhuizen, said getting more black students is imperative” to making the campus more diverse and inclusive. She said the ban on using race as a factor in admissions is a hurdle.

The university has been sensitive to concerns that too few blacks are enrolled. In

October, Robert Sellers was appointed as chief diversity officer as part of broader efforts to improve diversity. There’s also an $85 million, five-year plan in a number of areas, including recruitment and outreach.

Previous post US consumer spending up 0.5 percent in December