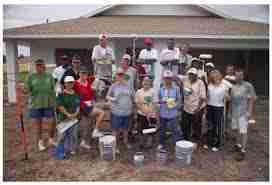 By SUSAN TAYLOR MARTIN
RUSKIN, Fla. (AP) – On a recent Saturday morning, a Home Depot employee was instructing a group of new home-owners on everything they might ever need to know about toilets.

For many homeowners, a faulty flapper and running toilet might prompt a call to a $50-an-hour plumber. But saving money is paramount for these newbies, who are about to take on 33-year mortgages on incomes as low as $19,800 a year.

All 30 or so in the group , many of them single moms, will soon move into houses they are helping to build under a little-known program called Florida Home Partnership. Since 1993, it has used grants from the U.S. Department of Agriculture to provide affordable housing with no down payments for more than 700 low-income families in rural areas of Hillsborough and Pasco counties.

“You drive by and it doesn’t look like, oh, this is where poor people live,” said Earl Pfeiffer, Florida Home Partnership’s executive director. “It doesn’t have that stigma.”

Although studies show that it is cheaper to own than to rent today, millions of Americans can’t afford the down payment on a house because they are spending so much on rent. A new report from Harvard’s Joint Center on Housing Studies found that the number of U.S. households that spend at least half of their income on rent could increase by 25 percent to 14.8 million over the next decade.

The problem is especially dire for low-income Americans, many of them Hispanics, whose wages have remained stagnant or even dropped despite the end of the recession.

For some, though, physical labor can be the key to a house of their own.

Like the far better known Habitat for Humanity, Florida Home Partnership requires would-be homeowners to contribute a lot of sweat equity, 600 hours’ worth. But unlike Habitat, whose homes tend to be scattered, the partnership builds communities in which several families start work on their houses at the same time and often on the same street.

That way people get to know each other before becoming actual neighbors.

On a recent Saturday morning, several men, women and children were helping Nycole Harris sweep up construction debris in what will be the first house she has ever owned.

Now living with her parents, the 29-year-old Harris spends all of her Saturdays and Thursday evenings tidying up her new abode. Despite a lot of dry-walling and other interior work yet to be done, “I like keeping it up so when I come in, it feels like home,” said Harris, a medical assistant who has two little girls.

After an hour or so of work, construction manager Jesse Ornelas yells: “Lock it up, Nycole!”

On that command, she and the others tote their brooms down the street to what will be Alba De Jesus’ home. As De Jesus proudly notes, it is the “Monterey model” with four bedrooms, two bathrooms, a two-car garage and a lovely view of a small lake. It is a far cry from the cramped two-bedroom apartment she now shares with her three kids, ages 4 to 17.

De Jesus, Harris and six other families who began work on their homes in June will move in by Dec. 31, just in time to claim a homestead exemption and throw a neighborhood New Year’s Eve Party.

Like many others, De Jesus learned of Florida Home Partnership by word of mouth, in this case, her sister, who already lives in Bayou Pass Village. And like many others, she is getting help from a friend, 56-year-old Teresa Rodriguez.

The two women, who met while working together as certified nursing assistants, are neighbors now in a Bloomingdale apartment complex and hope to be neighbors again in Bayou Pass. Rodriguez has applied for a three-bedroom home; in the meantime, she has joined the Saturday broom brigade.

“This is a very nice program,” said Rodriguez, glistening with sweat. “Honestly it is.”

To qualify, applicants must have an annual household income of at least $19,800, considered the minimum to be able to afford the mortgage payments. The maximum income can’t be more than $33,050 for an individual or $47,000 for a family of four.

Applicants must also provide at least two years of tax returns, have a good credit history and no late rental payments in the past year.

More than half of Florida Home Partnership’s 25 employees got their own houses through the program, most of them before they went to work for the organization.

“Whenever we have a position,” Pfeiffer said, “we try to offer it to someone in the program who we know would be a good fit.”

Among the homeowner/employees are loan officers. They help new applicants obtain low-interest mortgages, some from private lenders, most from the Department of Agriculture.

It would be hard to find a better housing deal anywhere.

For a three-bedroom, two-bath home that costs $133,000, monthly payments including property taxes and insurance run around $650. That’s almost $300 less than the median rent for a two-bedroom apartment in Tampa.

Moreover, all of the homes are green-built and energy-star certified to keep power bills low. The partnership hires licensed contractors for the framing, plumbing and other major work. The homeowners do the less skilled jobs like painting and landscaping.

Denise Lawry, 51, helped plant trees in Bayou Pass Village before she even applied for a house. Now her four-bedroom home is among those set to be ready by year’s end. She was able to pick the color of her cabinets and appliances (white) and the style of cabinet hardware (traditional).

Another bonus _ the house was redesigned so that Lawry’s 76-year-old mother, who uses a wheelchair, can go straight from her bedroom into the bathroom across the hall without having to maneuver around corners.

Having once struggled to install a toilet, Lawry was among the most attentive at that morning’s Home Depot class. (”I had to really rock that toilet,” she told the instructor.) Florida Home Partnership requires the classes for all homeowners because, as Pfieffer says, “Home Depot will be their new best friend.”

By the time their houses are finished, Lawry and the others will know how to flush sediment from a water heater, install a drip irrigation system and, of course, how to replace a toilet flapper. Before moving in, each will get a “tool package” that includes hand tools, a ladder, broom, rake and shovel.

A drive through established sections of Bayou Pass Village shows that most of the 363 occupied homes are well maintained, with neatly mowed lawns and even professional-grade landscaping. There have been some foreclosures but the village doesn’t have the ravaged look of many hard-hit subdivisions in south Hillsborough.

“It’s not so easy to walk away from something that you put 600 hours of work into,” Pfeiffer said.

Florida Home Partnership is building Bayou Pass Village in five phases. It is now on Phase Four, on 80 acres it bought for $1.49 million from Regions Bank, which had foreclosed on a developer. When completed, the village will have 674 homes.

Pfeiffer, 62, a licensed general contractor, calls working with the homeowners “the most rewarding thing I’ve ever done.” He had been building homes for the city of Tampa’s Challenge Fund, a now-defunct affordable housing program, when he saw a newspaper ad seeking an executive director for a start-up organization called Florida Home Partnership.

That was 18 years ago and he has been with it ever since.

The partnership is among 100 nonprofit groups nationwide that get funding through the Department of Agriculture’s Rural Self-Help Housing Program, which has helped build 50,000 homes in rural areas of the United States in the past 50 years. But rural areas are fast disappearing in places like Tampa Bay. Pfeiffer predicts that Ruskin, home to a huge Amazon distribution center and scores of other new businesses, will have too many people to be considered rural by the time the 2020 census rolls around.

But that is years away. For now, Pfeiffer has plenty to keep him busy. Stopping by Denise Lawry’s place, he assures her that a problem with the kitchen cabinets will soon be fixed.

As he speaks, she gently runs her finger over the metal numbers 1-5-1-8 that will go over the front door.

The front door of her very own home.