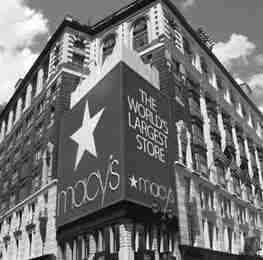 NEW YORK — Macy’s, the nation’s largest department store chain, says its earnings for the quarter that includes the holiday period dropped nearly 13 percent as results were dragged down by lower sales, store closures and other costs.

The profit results beat Wall Street expectations, but Macy’s said it would post another year of sales declines for a key revenue measure. The latest quarter marks the eighth straight period of sales declines for the critical metric. Like many department stores, Macy’s has faced sluggish sales as customers buy more online and less at the malls where they are often an anchor. Macy’s has been shuttering stores as it tries to regroup.

Macy’s has also been under pressure from shareholders to get more value out of its real estate holdings, which activist investor Starboard says is worth nearly $21 billion. The chain has reportedly been in preliminary talks with Hudson’s Bay about a takeover or a real estate deal. However, Macy’s declined to talk about the topic Tuesday, saying it doesn’t comment on rumors. It did say it will be looking to further monetize its locations. Macy’s has been closing stores and selling off key locations; those moves delivered $673 million in the latest year in asset sales.

“While 2016 was not the year we expected, we made significant progress on key initiatives that are starting to bear fruit,” Macy’s CEO Terry Lundgren said in a statement. Those include a new approach to merchandising fine jewelry and women’s shoes, an increase in exclusive products and testing an off-price strategy that aims at rivals like T.J. Maxx.

Lundgren, who will be stepping down March 23 to be succeeded by President Jeff Gennette, has been credited for nearly doubling sales during his tenure at the top. And Macy’s had been a stellar performer after the recession, but has seen sales slow as it and other traditional department store chains face competition from online leader Amazon and off-price rivals. They’re also wrestling with shoppers’ shift away from buying clothing in favor of experiences.

In his last conference call with investors as Macy’s CEO, Lundgren emphasized that physical stores will play “an extremely important role in the future of shopping.” But he said retailers can’t sit still. The company will be testing new merchandise concepts, new services and entertainment to get shoppers into stores and buying. It’s also working on a strategy to transform its beauty business.

“In my 14 years as CEO of Macy’s Inc. and my six years as CEO of Neiman Marcus before that, I’ve seen a series of setbacks that seem to happen every five to seven years in our industry,” Lundgren told investors, citing the 9/11 terrorist attacks and the 2008 financial crisis. What’s different about the latest setback, he said, is something positive – consumers have money to spend, but they’re just spending it on different things.

“At some point, you’ve got to believe that everybody’s going to have a brand-new car,” Lundgren added, and they’ll be buying other things again.

Ailing Sears Holdings Corp., which operates Sears and Kmart, announced earlier this month that it expects sales at established stores to fall more than 10 percent for the quarter. Sears Holdings, which has been losing money for years, has been closing stores too. In January, it announced the closing of 150 of its 1,500 stores, and said earlier this month it may sell more locations.

The Macy’s brand still has around 700 stores, though it has been more aggressive about closings.

Macy’s said it expects revenue at stores opened at least a year will be down 2.2 percent to 3.3 percent for the current quarter. That includes licensed businesses like perfume.

Next post Uber to investigate sexual harassment claim by engineer