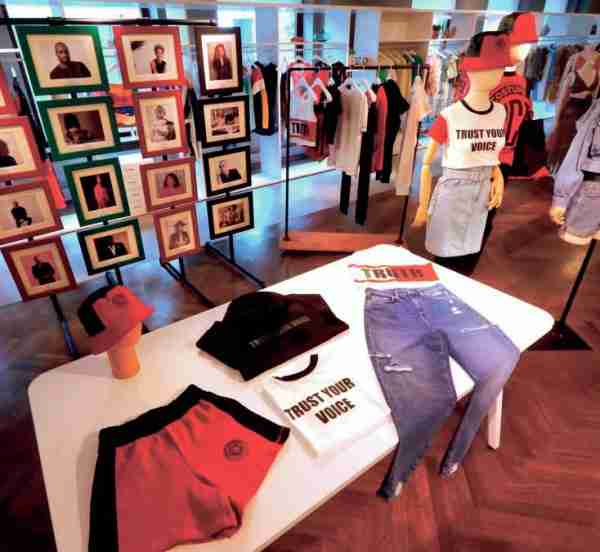 New York (AP) — From shoes and T-shirts to dolls and tote bags, more companies and brands are getting into the business of Black History Month but trying not to leave the impression that African American consumers are important just once a year.

Some businesses are using February to show off the diversity of their yearround product lines or to draw attention to the creative talent of their African American employees.

Target rolled out a Black History Month assortment that spotlights black-owned brands such as Honey Pot feminine products, Lip Bar cosmetics and Scotch Porter, which specializes in men’s grooming. The collection includes books, music and food that are favorites among Target’s African American employee resource group, which has more than 1,000 members. The company has been promoting the products through blogs and commentary from its staff.

H&M has a new street wear collection designed in collaboration with Ruth Carter, the Academy-Award winning designer behind the costumes for films including “Black Panther,” “Malcolm X” and “Amistad.” The pants, shirts, totes and hats — featuring the pan-African flag colors of red, black and green — debuted in February, but the collection was not billed as a Black History Month tribute.

“Companies are getting smart about making it integrated into the rest of the year, as opposed to one month when you give money to the NAACP or run an ad, as opposed to treating it as an expense, just one of those things we have to do otherwise we’ll get in trouble,” said Brenda Lee, founding director of the marketing research firm Vision Strategy and Insights, which researches African American, Hispanic and Asian consumers.

Ezinne Kwubiri, H&M’s head of inclusion and diversity for North America, said she notices more companies publicly marking Black History Month, but “the next thing is to challenge them to do more during the year.” The Carter collection, for instance, will be a long-term collaboration, she said.

“Let’s not make this about one month of recognition,” said Kwubiri, who was hired to her position following an uproar two years ago when H&M featured a black child model wearing a “monkey in the jungle” Tshirt on its website in the U.K.

While companies have been marking Black History Month for years, the events are getting bigger, and more brands are joining in, seeking to connect with increasingly diverse generations of consumers.

Target launched its Black History Month assortments five years ago. This year, the retailer tripled the number of U.S. stores carrying the assortment to 700. Melanie Gatewood, director of multicultural merchandise, said Target was able to tap into blackowned businesses that it has been working with for years.

Nike launched a special edition sneaker 15 years ago for Black History month with the pan-African colors. This year, it has an entire collection modeled by young black leaders including artist Shani Crowe and McKinley Nelson, founder of Project sWish, a Chicago foundation dedicated to inner city youths.

Michaels, the arts and crafts retailer, has a collection of black heritage products this year, a project that originated with its African American and black employee resource group. The products include printed vinyl rolls that have proved so popular that Michaels plans to include them in its permanent collection.

“A major part of avoiding missteps is being authentic in anything you do,” said Davette Angelo, a merchandising product manager, adding that she and designer Sharae Averhart “pulled on our experiences and backgrounds to put this collection together.”

Still, there have been mistakes along the way, especially when there is no consensus on what crosses the line into exploitation and trivialization.

Barnes & Noble this month pulled a widely condemned line of classic literature reissued with covers featuring dark-skinned versions of characters like Alice in Wonderland. The organizers of “Diverse Editions” relied on artificial intelligence to review more than 100 older books to identify which ones to reissue.

“That was a great example of that being all about pushing the books and nothing about promoting the community,” Lee said. “What about that was grounded in African American history?”

OneUnited Bank, the country’s largest black-owned bank, released a debit card in mid-February with Harriet Tubman on it as a way to highlight the stalled effort to put the abolitionist icon on the $20 bill. There was an instant backlash from Twitter users who chafed at the image of the former slave on a debit card.

Frederick Knight, an associate professor of history at Morehouse College, said it might have been more meaningful to elevate a lesserknown figure more directly tied to black economic empowerment, pointing to Maggie Lena Walker, who chartered a bank after the Civil War.

“There are more appropriate people they could have used this opportunity for, rather than take advance of an iconic person like Harriet Tubman,” Knight said.

But the bank stands by its decision, noting that the card is the ninth in a series with black faces on them, including one launched in partnership with the Black Lives Matter movement. It stems from a re-branding the company undertook in 2015 to put its black identity as the center of its marketing. OneUnited Bank President Teri Williams said the Tubman card has been its best seller.

Adriana Waterston, senior vice president of insights and strategy for Horowitz Research, said companies are responding to customers that take pride in seeing their heritage represented in powerful brands.

“Especially in today’s racially polarized environment, showing up and supporting one community speaks volumes,” Waterston said. “If you are only showing up once a year, black consumers will easily see through this and consider you disingenuous.”