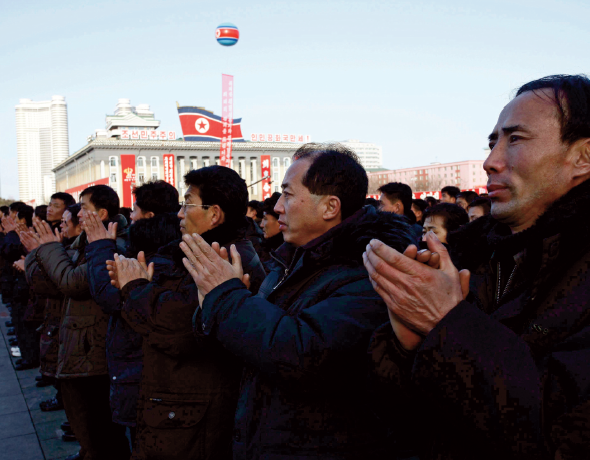 TPYONGYANG, North Korea – When North Korea claimed triumphantly that it had tested its first hydrogen bomb, it was roundly and predictably condemned by the United States, China, Russia, Britain, France and India, countries estimated to possess a combined total of more than 15,000 nuclear warheads.

Non-nuclear powers condemned the test, too, including Japan, the country that was on the receiving end of the only atomic bomb attack in history – the U.S. bombing that ended World War II in the Pacific in 1945.

But while most of the world, East and West, agrees that no one wants North Korea to be an effectively functioning nuclear power, a question that can’t be escaped lurks behind the condemnation: How much right do nations have to tell other nations what to do? Moreover, how much of a right do nuclear powers, which have no intention of giving up their own arsenals, have to demand others to give up theirs?

North Korea, of course, says none.

In a show of defiance and nationalist pride that is so characteristic of the North, masses of North Koreans filled Pyongyang’s Kim Il Sung Square on Friday, which happened to also be leader Kim Jong Un’s birthday, to celebrate their military’s new crown jewel. Fireworks and dancing parties were held after the rally.

“This hydrogen bomb test represents the higher stage of development of our nuclear arms,” Pak Pong Ju, North Korea’s premier, told the crowd, which officials said was 100,000-strong. “It will go down in history as a perfect success and now the DPRK is proud to be ranked among nuclear states possessing hydrogen bombs. The Korean people can demonstrate the stamina of a dignified nation with the strongest nuclear deterrent.”

The North’s official name is the Democratic People’s Republic of Korea.

With its latest test last Wednesday, which may or may not have been of an H-bomb – outside expert opinion remains divided – it is treading further down a dangerous, but well-worn, path.

As has been the case with every nation that went nuclear, possession of such weapons is seen by the North’s regime as a strategic necessity. That’s why decades of pleading with and punishing the North simply haven’t worked.

Developing a credible nuclear force is in the long run cheaper for Pyongyang and far more likely to be successful than building and maintaining the massive and highly sophisticated conventional forces that would be needed to deter the United States. Though mega weapons like the H-bomb have become largely irrelevant to superpower military planners, who now have the technology to conduct precision attacks that are far more effective and less likely to generate universal condemnation, it’s the kind of threat that still works for Pyongyang.

Its self-defense claim is also hardly extraordinary. It has been used by all of the nuclear powers.

After dropping its first nuclear weapons on Hiroshima and Nagasaki, the United States went on to develop its arsenal of nuclear doomsday devices because of what it saw as the threat of Soviet aggression. The Soviets made the same claim, but about the U.S. Some European allies, not wanting to be too dependent on the U.S., followed Washington’s lead. The Chinese, worried about both Washington and Moscow, got one of their own. India got the bomb because of Pakistan, and Pakistan because of India. And Israel is believed to have nuclear weapons because of its neighbors.

None has given up their nuclear arsenals. The recent nuclear deal between the U.S. and Iran may have made a dent in Pyongyang’s thinking, but two countries that did start down that path and failed _ Iraq and Libya – appear to still weigh much more heavily.

“The Saddam Hussein regime in Iraq and the Gadhafi regime in Libya could not escape the fate of destruction after being deprived of their foundations for nuclear development and giving up nuclear programs of their own accord, yielding to the pressure of the U.S. and the West keen on their regime changes,” the Korean Central News Agency said in an editorial Friday.

If, as North Korea claims, it is trying to defend itself against a nuclear-armed adversary bent on regime change and with which it is actually at war – the 1950-53 Korean War ended in an armistice, not a peace treaty – why should its claim to have a right to possess nuclear weapons be treated any differently from other nuclear powers?

For the nuclear haves, that’s not even worth considering – North Korea is too irresponsible, too unpredictable and too untrustworthy for it to be a valid question.

“There is no need to argue about why North Korea can’t have nuclear arsenal while other countries have already become nuclear powers,” said Shi Yinhong, one of China’s best-known international relations scholars at Renmin University and a sometime government adviser. “All the nuclear powers such as U.S., China, France, the U.K. and Russia are responsible major countries in this field.”

China, however, also conducted its first tests under an autocrat, Mao Zedong.

Like North Korea, India is also deeply proud of its nuclear program and sensitive to any criticism of it, particularly when it comes from other nuclear powers, and the United States, along with most of the world, has accepted India as a de facto nuclear weapons state.

But unlike North Korea, that was in large part because a nuclear India served the interests of at least some of the status quo.

“To put it crudely, it’s about China,” said Rahul Bedi, a prominent New Delhi-based writer on defense issues. As China’s power has grown in recent years, the West has sought allies to balance out Beijing’s ever-growing influence. India, with its growing economy, regional influence and democratic government, was pretty much the only choice. “The world, and the Western world in particular, needs a frontline state, in a sense, to challenge the Chinese.”

Although Pyongyang is hoping that, like India, given enough time the world will simply have to accept it a nuclear power, it is for now truly going forward on its own.