“Not One Penny” Campaign gaining ground across the country 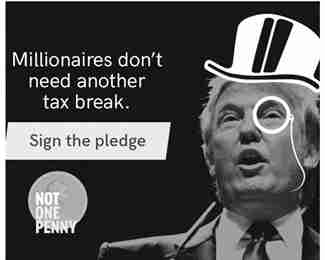 Not One Penny Campaign

Washington, D.C. —In response to the effort in Congress to give tax cuts to the wealthiest Americans, the “Not One Penny” campaign is announcing that the coalition of progressive groups calling on Members of Congress to reject tax giveaways to the rich has grown to more than 30 partners.

From San Diego to Cedar Rapids to Syracuse, “Not One Penny” organizers are mobilizing in local districts to hold Members of Congress accountable for their efforts to rig the tax code even further in favor of the rich and major corporations. Organizers held events at the district offices of Rep. Darrell Issa and Rep. John Katko, and will continue to mobilize across the country this week.

New partners joining the Not One Penny campaign include the Center for American Progress Action Fund, NextGen America, Main Street Alliance, DEMOS, SEIU 32BJ, Economic Policy Institute’s Policy Center, People for the American Way, People’s Action, Social Security Works, and other progressive organizations. Launched in early August, the campaign is centered around a central pledge: we should give not one penny in additional tax breaks to the rich or to wealthy corporations.

“Let’s call this disastrous tax and budget agenda what it is: an attempt by President Trump and congressional Republican leaders to pad the pockets of the wealthy – at the expense of ordinary Americans,” said Emily Tisch Sussman, Campaign Director of the Center for American Progress Action Fund.

“This is not the GOP’s first attempt to secure tax giveaways for millionaires, billionaires and giant corporations and we will continue to fight any proposal that does so.”

“Donald Trump and Republicans continue to place corporate greed and billionaires ahead of citizen needs and hardworking American families,” said Tom Steyer, President of NextGen America. “If we want a balanced economy, we must guarantee working people a fair return on their labor — and restore balance to a tax code already rigged in favor of the wealthy. That’s why NextGen America is proud to stand with the Not One Penny campaign and draw a clear line: Not one penny in tax cuts for millionaires, billionaires, and wealthy corporations.”

“Despite their claims to be looking out for Main Street, the GOP’s proposed tax cuts simply don’t benefit the vast majority of small businesses,” said Amanda Ballantyne, National Director of Main Street Alliance.

“On the contrary, it’s clear their tax cuts defund programs that ensure basic living standards, like health care and education, in order to provide a massive windfall to the very wealthy. Small businesses don’t need those tax cuts – they need government investment so that communities are healthier, local economies are stronger, and so that they have more customers.”

“Our democracy cannot thrive under these historic levels of economic inequality,” said Tamara Draut, Vice President of Policy and Research at Demos. “Tax breaks for the super-rich only make the problem worse: the wealthy and well-connected need no more champions in Washington, they are thriving while working and middle-class people are struggling. Instead, Members of Congress need to stand up and say they will not support one penny in tax cuts for the top one percent.”

“Working families deserve a fighting chance, but the Trump Administration and his right-wing allies in Congress are stacking the deck against working Americans just to line the pockets of the already wealthy and powerful,” said Héctor Figueroa, President of SEIU 32BJ, the largest property service workers union in the country. “Make no mistake; this is an anti-worker tax plan that will do nothing to create jobs while devastating our social safety net. We are not going to build a more just society by gifting the richest Americans tax breaks they do not need at the expense of critical programs like Medicare, Medicaid, and Social Security. It is time for every elected official to stand up and say ‘Not One Penny’ in additional tax cuts for the rich. For Trump and his team of cronies the message to America is: you are on your own. It’s time to fight back.”

“The goal of President Trump’s so-called plan is to give tax breaks to the wealthiest Americans and to massive corporations, paid for by eliminating critical services and programs that ensure the well-being and financial security of millions of American families,” said economist Lawrence Mishel, president of the Economic Policy Institute’s Policy Center. “Doing so will not create more jobs and growth and, especially, will not generate higher wages for the vast majority.”

At NotOnePenny.org, constituents can take the pledge “to oppose any effort to cut taxes for the wealthy and well-connected. Not one penny in tax cuts for millionaires, billionaires, and wealthy corporations.”

Previous post Netflix loves to pick hits for each subscriber - but how is it done?