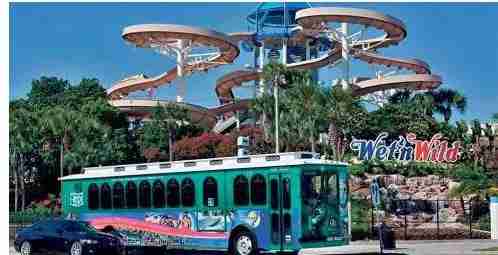 ORLANDO, Fla. – The Orlando tourist strip known most for attracting conventioneers and thrill-seeking visitors – International Drive – is getting another identity.

In recent years, thousands of full-time residents have moved into apartments built on the southern end of the 11-mile corridor, which has been renowned for industry gatherings, shopping and attractions. Plans call for thousands more renters – and schools.

“It’s kind of the rebranding of I-Drive right now, said Luann Brooks, executive director of the I-Drive Business Improvement District. “We’ve turned into a live and work environment, which has never been seen here before.”

The I-Drive area has been a permanent address for renters and also homeowners on Lake Willis for years. But a transformation is underway with more than a half-dozen multi-story apartment complexes, some upscale and trimmed in stacked stone with resort-style pools.

The south-central area of Orlando that includes International Drive is quickly evolving with more new apartments than any other submarket in the region, according to a Cushman & Wakefield analysis of Axiometrics data. That area is slated to grow with 3,472 rental apartments during a four-year window that began in 2015.

Life on the edge of one of Florida’s busiest tourist scenes isn’t so bad, one resident said.

Tim Kendall has lived at Citi Lakes apartments on International Drive for several years. Average rents there are $1,351 for living space just under 1,000 square feet, according to Preferred Apartment Communities Inc.

Kendall said he feels safe walking about a mile to a Publix and the Orlando Vineland Premium outlets. It’s an improvement over his previous apartment off Oak Ridge Road, he added. He said he has plenty of dining and entertainment options, although the Orlando Eye observation wheel could be a one-time visit.

“This end of town, it’s great. The crime isn’t as bad. We’ve had a few incidents here and there but nothing major,” he said, adding that most of his neighbors are employees working for the theme parks, convention center and other tourist-driven operations.

The I-Drive district’s 13,000 full-time residents are a growing population but far outnumbered. For every permanent resident, the district has about 1,000 visitors.

Margery Johnson, who specializes in Orlando-area land sales for the Cushman and Wakefield real estate brokerage, said demand for apartments has helped boost prices for the area. Land-use restrictions allow up to 30 percent of property to be used for apartment-style projects, she added.

“Now everything that could be residential has been snapped up,” Johnson said. “It really is just remarkable.”

Down the street from planned tourist draws like Topgolf and Andretti Indoor Karting and Games, eight new apartment complexes have been completed or nearing construction in about the next year, Brooks said. They range from the Addison with 344 units to the more boutique-size Lake Vue with 196 apartments.

Apartments are just the beginning of the growing residential face of the drive. The Orange County School District is moving forward with two school sites to serve families in the area.

Earlier this year, it agreed to spend $25 million on property at Daryl Carter and Palm parkways for a 2,776-student high school to relieve crowding at Dr. Phillips and Freedom high schools when completed in 2022. In addition, the school system spent $8 million for land south of International and New River drives for an 830-student elementary school planned to open in 2020.

“The schools for the south end of I-Drive were already getting crowded and the district recognized there was more growth coming,” said Lauren Roth, spokeswoman for the district’s construction program.