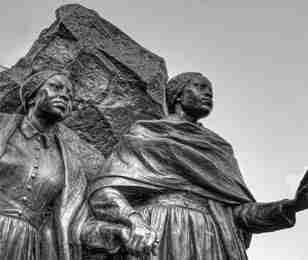 ALEXANDRIA, Va. – The dying afternoon light was just enough to illuminate the little yellow rowhouse now for rent, which two centuries ago served the best crabs in Old Town Alexandria.

Its owner was Dominick Barecroft, a slave who bought or was granted his freedom in 1800. Just four years later, he opened his tavern and grocery, which welcomed customers of all races for the next two decades.

There are similar stories all over this city, tour guide John Taylor Chapman told the seven people who had signed up on a recent Sunday to learn about an overlooked aspect of American history.

Unlike their brethren on Southern plantations, slaves who labored in homes and businesses in places like Alexandria occasionally found ways to earn money, explained Chapman, a 35-year-old community liaison for Fairfax County Public Schools and a member of the Alexandria City Council. Sometimes, it was enough to buy their freedom. Others managed to escape slavery aboard the many ships docked at Alexandria’s port.

Chapman, an Alexandria native who once headed the local NAACP chapter, has spent the past 11 months researching the lives of slaves from the city who became free. He is driven by his own family history and a desire not to let the rich past of Alexandria’s African American residents be forgotten.

The result is a three-month-old company called Manumission Tours, named for the act of freeing slaves. Chapman runs the 90-minute, $10 tours on Sunday afternoons, steering customers through places and stories of enslaved sugar mill workers, carpenters and gardeners who lived and labored in the small confines of Old Town before the Civil War.

It is a small and unusual addition to the exploding world of black history-related tourism, which can be seen in the crowds that have swarmed the Smithsonian Institution’s new National Museum of African American History and Culture and the steady popularity of the recently opened exhibit on George Washington’s slaves at Mount Vernon.

In Alexandria, the Northern Virginia Urban League operates a museum at the former Franklin & Armfield slave pen, where the central character in the movie “12 Years a Slave” was held after his capture. A brochure on African American historic sites is in its third printing and has been “flying off the shelves,” said Audrey Davis, director of the city’s Black History Museum, which itself has had significant visitor growth in the past few years.

“These stories of slavery and enslaved people are part of everybody’s story in America,” said Susan Schoelwer, senior curator for “Lives Bound Together” at Mount Vernon, which uses George Washington’s records to tell stories of individual slaves. “It in some way affects all of us.”

Chapman first thought about a tour business about a year ago, when the council was debating the redevelopment of a 74- year-old public housing project known as the Ramsey Homes. He was bothered that so few city residents seemed aware that the homes were built as segregated housing for the black defense workers who flooded into the area during World War II.

“Ramsey Homes’ history had not been talked about publicly for decades,” Chapman said. “If you knew the right person, and they had the time, they might be able to tell you. But most of us had a lack of understanding and lack of celebration of black history sites.”

The nation was in the midst of a painful debate over Confederate symbols, in the wake of the 2015 shooting of African American churchgoers in Charleston, S.C. Alexandria had just ended its longtime practice of having city workers raise a Confederate flag for a private group twice a year near a statue of a defeated Confederate soldier. Months later, Chapman and his council colleagues would vote to re- name the city’s portion of Jefferson Davis Highway, which honors the leader of the slaveholding Confederate States of America.

Leaving City Hall after evening meetings, Chapman often saw historical walking tours headed through Old Town. They focused mostly on Colonial history. Few mentioned that Market Square was the site of slave auctions or that several lynchings of black men have been documented there.

Chapman decided to change that. Encouraged by Patricia Washington,the chief executive of the local convention and visitors bureau, and several others, he enrolled in a six-day business boot camp last summer and raised money to supplement his own funds using social-media crowd- funding.

He also began doing research in the local history collection at the Barrett Branch Library, itself the site of one of the earliest civil rights sit-ins protesting segregation. With each tour, he says, he’s uncovered a bit more history, long-forgotten stories from older residents and bits of evidence of the crucial role black residents played in city life.

Chapman says he’s convinced that Alexandria’s location, smack between the Smithsonian and Mount Vernon, could make the city part of a “route” for tourists interested in African American history.

In addition to his first tour, which focuses on urban slavery, resistance and abolition, he is considering adding walking or bus tours of upper Duke Street, the location of the Franklin & Armfield slave pen, a second slave jail, a cemetery for black federal Civil War troops and a memorial to the abolitionist Edmonson sisters; black churches in Alexandria; and, more recently, the impact of gentrification.

“I want to peel back the multiple histories of Alexandria,” Chapman said. The tours will be on winter hiatus Dec. 12 through Jan. 31, then resume with a themed scavenger hunt in February.

Chapman’s maternal grandfather was one of the first black taxi drivers in Alexandria, and his grandmother was a self-employed hairdresser. His great-grandparents were slaves in South Carolina, according to family lore.

As children, he and his sister Jennifer were routinely taken to exhibits and historic sites by their mother, Michele Chapman, who instilled such a love of history in him that he majored in the subject in college.

“I see not only my grandparents, but folks like myself, trying to be enterprising, regardless of the time period or the rules against them,” Chapman said.

On the Manumission tours, he tells the stories of freedman Moses Hepburn, who in 1850 built four brick rowhouses on North Pitt Street that are still standing and occupied; Sophia Browning Bell, a slave to the mother of a Maryland governor who managed to raise and sell vegetables at the Alexandria farmers market, thus saving enough money to buy her husband’s freedom; and the Quaker proprietors of the city’s Stabler-Leadbeater Apothecary, whose 11 pharmacies were rumored to be stops on the Underground Railroad.

Monica Jones, 32, an African American defense contractor who grew up in Richmond, took the tour twice, in September and again in October. She had never really thought about urban slavery before.

“Seeing folks able to go from being enslaved to starting their businesses – their preservation and dedication is inspiring even now,” she said.

The tour starts at the Lloyd House, where slaves as young as 12 years old worked in a sugar refinery. It ends at the waterfront, where Chapman tells the story of a southbound boatload of slaves, blown off course during a storm, landing in Bermuda. Given the chance to live in freedom on the island, most chose to do so – except for one man who opted to go back to the United States and slavery.

“We don’t know why,” Chapman told his charges. “Maybe he had family he didn’t want to leave behind.”

The seven customers on the tour stared out at the inky Potomac as a full moon rose. They talked about what would make a person get back on a ship that would return him to captivity. Then they slowly dispersed, up the lamp-lit brick sidewalks of King Street and back into the 21st century.

Previous post The global black dilemma must be breached!