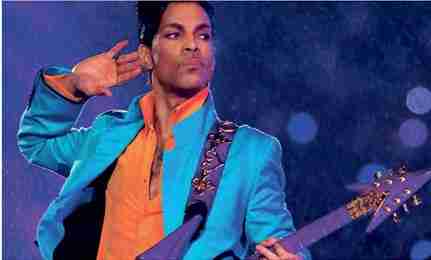 Prince accepted a standing ovation as he strolled out carrying a cane and rocking an Afro to present the 2015 Grammy for album of the year. Then he stole the show with a line that reminded everyone he was more than just a pop superstar; he was a black activist.

In the wake of his death Thursday at 57, radio stations played his biggest hits and fans came together to grieve. But beyond the chart-toppers and dance parties, the legacy of Prince Rogers Nelson grew to include political stances, challenges to record execs and an overarching focus on African-American empowerment.

At the Grammys in Los Angeles, Prince was referring to the Black Lives Matter Movement that was galvanized by the 2014 police killing of an unarmed Michael Brown in Ferguson, Missouri.

But Prince didn’t stop there. After protests rocked Baltimore over the death of a black man who suffered a spinal injury while riding in a police van, Prince stepped in and performed a tribute song named for the city that included the line, “Does anybody hear us pray for Michael Brown or Freddie Gray?” “This song shined a new light,” said Pastor Charles Ewing, Brown’s uncle. “A lot of his music had messages.”

It wasn’t the first time Prince con- nected his music to the fight for racial justice. He told The Associated Press in 2004 that he had chastised music industry bosses over rap and R&B that promoted sex, drugs and violence. “What you won’t show your kids, don’t show ours,” he said at the time.

About a decade earlier, he publicly feuded with record label Warner Bros. and appeared with the word “slave” scrawled on his cheek. Music journalist Kelley L. Carter said she thinks Prince saw racial inequality in that dispute and others, including his beef with music streaming services over artist pay that has left fans scrambling to find their favorite Prince songs. She said his defiance wasn’t about enriching himself, but about “trying to pave the way for the next generation.”

Carter, senior entertainment writer for ESPN’s The Undefeated, a website about race, sports and culture, wrote recently about meeting Prince last year at his Paisley Park compound in suburban Minneapolis, where he threw a party for black journalists in town for a convention.

She said the conversation turned to the reported $400 million deal that brought the Beatles catalog to iTunes. Prince said he hadn’t been offered nearly as much, and when someone asked whether he thought he was being lowballed because he was black, Carter wrote, “He shot us all a ‘what-do-you-think?’ kind of look.”

Prince signed on instead with Tidal, the music streaming service backed by Jay Z, telling Rolling Stone last year: “Once we have our own resources, we can provide what we need for ourselves. Jay Z spent $100 million of his own money to build his own service.We have to show support for artists who are trying to own things for themselves.”

He also told Ebony that artists should seek to control distribution, saying, “Where we finally get into a position to run things – we all should help.”

Prince also sent money to the fam- ily of Trayvon Martin after the unarmed Florida teen was shot to death by a neighborhood watch volunteer in 2012, the Rev. Al Sharpton said recently on MSNBC.

His black consciousness was also apparent in his best-known records and performances, according to Stephen Hill, president of programing for BET, or Black Entertainment Television. “Prince was very proudly black and a lot of the music that he played – you’ve got to remember the rock ‘n’ roll that some people said that was the ‘white’ side – no, rock ‘n’ roll was black music. Funk is black music. Ballads is black music,” Hill told the AP. “Prince was playing music that was true to his soul and true to his core.”