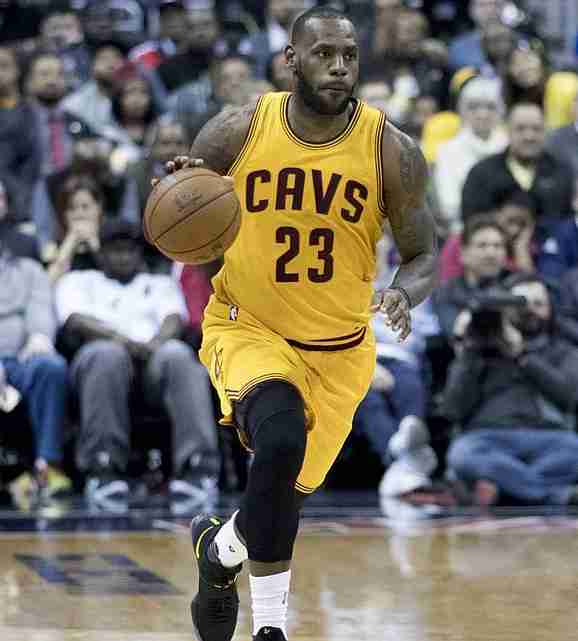 CLEVELAND – The Cavaliers are teaming up with another Akron icon.

Linked by geography and superstar LeBron James, the defending NBA champions on Monday announced a three-year sponsorship deal with Goodyear. The Cavaliers will wear the tire giant’s winged-foot logo on the fronts of their jerseys starting next season.

“This is a natural fit between two organizations rooted in Northeast Ohio whose strong brands have a global following,” said Rich Kramer, Goodyear’s CEO and president. “Goodyear has always been connected to the Cavs from our blimp coverage to the tremendous passion of our associates for the team, and we’re excited to make this relationship even stronger.”

The team believes the Akron-based manufacturer is a perfect partner, partially because of the shared ties with James, the three-time champ who grew up there and remains committed to his hometown.

Financial terms were not disclosed, but the deal, which includes advertising, jersey and merchandise sales, could be worth $10 million annually for the team.

The logo will be unveiled this summer when Nike, which will become the league’s official uniform supplier beginning next season, rolls out Cleveland’s new jerseys.

The Cavs are the latest NBA franchise to land a corporate sponsor. Last year, the league approved teams signing companies to place logos on the upper left portion of their jerseys. Philadelphia, Boston, Sacra mento, Utah and Brooklyn all have similar corporate partnerships.

While relatively new in North American sports, corporate logos have been on team uniforms in Europe for years.

Cleveland guard Iman Shumpert said he was initially against the idea but now accepts that it’s part of a changing NBA.

“Growing up you’re so used to seeing just the classic jersey,” he said. “At first I wasn’t taking to it or positive about it. I didn’t like it. But seeing how they’re doing it, understanding why they’re doing it and me, I kind of got the best of both worlds – I got to play in a jersey without it and I guess I’ll be one of the first ones to play with it. So, it’s part of it now and we’ll move from there.”

As the agreement was being announced inside Quicken Loans Arena, Goodyear’s unmistakable blimp circled the building and downtown on a spectacular spring day. Already a staple at major sporting events, the blimp – with the company name emblazoned across its side – will now have an even larger presence in Cleveland.

“Every Akron kid grew up seeing the Wingfoot in the sky on the blimp and feeling pride in our community,” James said. “There is something special for me personally about having that logo on the Cavs uniform. Goodyear is also very supportive of the LeBron James Family Foundation. I can’t imagine a better situation with our new Cavs jersey than bringing together Nike and Goodyear, two companies that mean a lot to me and my family.”

Also, as part of the arrangement, the Cavaliers and Goodyear are donating $1 million to educational programs in Cleveland and Akron public schools.

The partnership had deeper meaning for Cavs general manager David Griffin. His mother is from Akron and his grandfather worked for 30 years with Goodyear Aerospace.

“The ashtray on our table was a wing foot,” he said. “In my family, if you were truly successful you were blimp-worthy.”

Kramer said part of the appeal of this sponsorship was the chance to connect with an international audience. Goodyear is growing its brand in China, where James is nearly as popular as he is in the United States.

Although best known for tires, Goodyear has some deep basketball roots.

In the 1930s, Goodyear was a founding member of the National Basketball League, a precursor to the NBA. The Goodyear Wingfoots won the first NBL title in 1937 and the AAU National Championship in 1964 with a team that featured Hall of Fame coach Larry Brown.

Cleveland coach Tyronn Lue is happy the Cavs will be rolling with Goodyear, but he has no plans to ride in the company’s blimp.