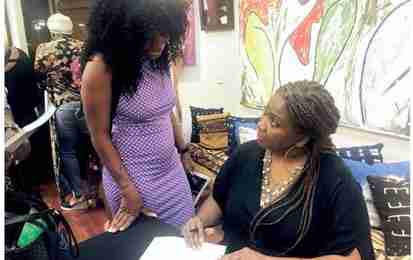 WORTHY DISCUSSION: Michelle Hollinger signs a copy of her new book, “Worthy,” following a discussion at the Three Masks Gallery in Orlando on April 21.

ORLANDO, Fla. – The venue was ideal for a discussion about worthiness. In addition to an expansive collection of African art, sculptures, masks and jewelry, Three Masks Gallery in Orlando provides a wonderful space for community gatherings, beautifully adorned with Afrocentric décor. It is where Conversations: A Literary Series is held each month. The April 21st edition of the series provided Michelle Hollinger, editor of the South Florida Times, a platform to discuss her new book, “Worthy,” which she wrote earlier this year.

“It was during a meeting with my business consultant that I realized that even after all the spiritual work I’ve done, I was still dealing with worthiness issues,” Hollinger shared with the audience. She said getting to the bottom of why she undercharged for products and services revealed that a poor sense of worthiness was shaping the way she made decisions and impacting how she was showing up in the world.

Pointing out, for example, that people who spend years at jobs they hate is an indication of wounded worthiness evoked knowing laughter from some of the approximately 50 people in attendance.

“Dimming your light to appease others who might not be comfortable with your success,” is another telltale sign that a person’s worthiness is wounded, added Hollinger, who is also the publisher of The Sisterhood, a magazine for women.

Milton McCulloch, the event’s creator and organizer said, “Featured author Michelle Hollinger and featured poet Charlene Sears steered us to the truth about recognizing and regaining our worthiness. Audience members have said they got more than what they expected.”

He launched the event in 2017 with quarterly gatherings and now hosts the discussions monthly from February to October at Three Masks (1023 W. Colonial Drive in Orlando).

“I seek to curate a literary series to delight, entertain, inform and inspire the cultural senses of the audience via the written and spoken word,” McCulloch said. A conversation about worthiness, he said, was a powerful addition to the series.

“Ultimately, the book helps remind people that life is not a dress rehearsal and the intention should be to arrive at the end of it with as few regrets as possible. Reviving your worthiness sets you free to express your gifts and talents, to take risks and be your authentic self – unapologetically,” Hollinger shared.

“Worthy” is available on Amazon.com.