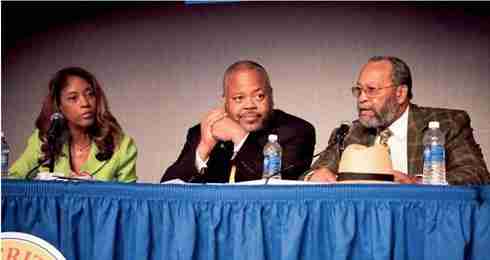 MIAMI GARDENS – Within Miami’s black communities are several ethnicities from the African Diaspora. With each group vying for its place at South Florida’s socio-economic table, opportunities for a collective pursuit of shared interests have been few.

Local attorney Marlon Hill served as host and kicked off the conference by paraphrasing an African proverb regarding the importance of self-determination. “If you don’t tell your own story, and write your own history, the tale of the hunter will receive all the glory,” he said. “We’re all connected here today.”

The near capacity audience was welcomed to the Miami Gardensbased HBCU’s campus by its president, Roslyn Artis who affirmed it as the ideal venue for a discussion regarding Black Miami. The principal convener of the event, Miami-Dade Chairman Jean Monestime set the tone for a solution-focused agenda.

“Today is not about casting blame. (It is about) accepting responsibility and an attempt to collectively chart a better future for our children and grand children,” said Monestime.

Umi Selah, formerly known as Phillip Agnew, co-founder of Dream Defenders, a panelist addressing youth and the next generation, questioned the absence of youth on the panel moderated by Shirley PlantinPierre, director of Youth and Family Advocacy at Sant La Haitian Neighborhood Center.

“No one under 25 from Miami is on the panel to talk about it. I think often when we talk about youth; we talk at youth, not with them. That is something we can rectify since this is about solutions,” Selah said.

He also challenged how youth violence is discussed; warning that talking solely about its symptoms is futile.

Also on the youth panel was Stephen Hunter Johnson, president of the 100 Black Men of South Florida, who addressed the reason that many talented young South Floridians graduate college and decide not to return to the area “Because they do not see a chance for economic growth and prosperity in Miami,” Johnson shared. On the topic of economic prosperity, Beatrice Louissant, CEO of the Florida Minority Supplier Diversity Council served as moderator on the panel that brought together former and current CEOs of businesses recognized by the Miami Dade Chamber of Commerce as “Business of the Year;” Ron Frazier and Darryl Holsendolph, respectively. While Holsendolph questioned the merits of local government reaching out to blacks and other minorities for inclusion in lucrative contracts, Frazier warned the audience that the type of racism blacks in business face has changed. “(City of Miami) Commissioner Hardemon and the CRA have meetings and are sharing with constituent groups what is coming and how they can get involved,” Holsendolph cited as an example of effective governmental outreach.

Frazier acknowledged that he has experienced white racism of all sorts in the past, but that because of Miami’s large Latin population, “Now we have Hispanic racism. Racism is the ultimate discrimination tool. Black folks have been suffering from intuitional racism and systemic racism. Everybody’s looking for this personal one-on-one racism. They don’t do that anymore,” he added. “We’re going to have to have that conversation.”

He encouraged small businesses to get certified because “We’re desperately looking for you to be a part of our process.”

G. Eric Knowles, president of Miami-Dade Chamber of Commerce, echoed the necessity for black businesses to become certified. He recalled a recent event targeting black businesses sponsored by Wells Fargo. “We had over 60 folks to register. How many showed up? About 12. We’ve got to wake up. We can knock down the doors, but if you’re not ready to walk through the doors, everything we’re doing is for naught,” Knowles said.

Previous post Homosexuality is the new black; but inappropriately so