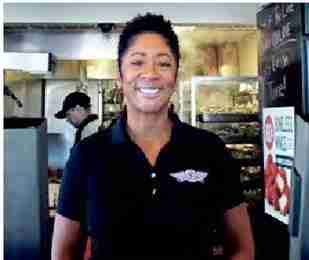 An award-winning entrepreneur, author, gifted teacher, and motivator, Tina Howell is certainly a candidate for superwoman status. With over 25 years of entrepreneurship experience, Howell has earned recognition for her accomplishments from Black Enterprise magazine, the Miami Herald and Legacy Miami magazine.

The mother of three has built an entrepreneurial empire. She is the owner and CEO of one of the largest minority-owned health home agencies, Virtual Home Care Inc. located in Dallas, Texas. Howell also owns two successful Wingstop restaurant franchises in South Florida and is in the process of opening two additional Wingstop locations in the community.

Howell said she became an entrepreneur so that she could live on her own terms. “I wanted to have control of my time and the ability to generate as much income for myself as I could,” she said. People who motivate her include Oprah Winfrey, Bill Gates, Rosa Parks and Harriet Tubman, whose face will soon grace the front of the twenty dollar bill.

Howell believes it is not unusual for strong, successful black women to be considered bossy or aggressive; while similar qualities in a man are typically viewed far more favorably. She believes the main difference between her and her male colleagues is the female approach. “I’m mindful to not challenge male ego,” said Howell. “It’s not always a battle of the sexes. As a woman, it’s important to be assertive and not aggressive in the workplace.”

Howell credits her versatility as an entrepreneur to her ability to strike a balance between powerful assertion and her compassionate nature.

“At times as the head of my company, I wear the pants but there are also times I just have to be a woman and allow that nurturing and compassionate side of me to shine. It’s a delicate balance,” she shared.

Howell uses her natural leadership abilities to help budding entrepreneurs awaken to theirs through her consulting firm, Tina’s Perspective. She recognizes that with the uncertainty of success, diving into the world of entrepreneurship may be daunting for beginners. While Howell too has experienced fear, she uses it as a tool for motivation instead of allowing it to stop her.

“Choosing to be a leader also means taking on a position with a lot of challenges and responsibilities,” she says. “I recognize fear for what it is and understand that I can let it either motivate or stagnate my growth.”

Howell values the power of thought, and attributes her personal success to positive thinking.

Aside from positive thoughts, Howell also practices spiritual routines that have positively impacted her entrepreneurial journey.

“Meditation has a tremendous impact on business decisions. Taking time to clear your head from outside opinions and be quiet allows you to receive solutions from a higher source than those at the workplace we are bombarded with on a daily basis,” she explained.

Howell is a keynote speaker at the Black Enterprise Entrepreneurs Summit for the ‘Franchising – Where are the Hottest Opportunities’ session. For more information on the conference, being held at the Loews Miami Beach Hotel from May 4 to 7, visit blackenterprise.com/es.