To women of color, Rihanna’s cosmetics launch is personal 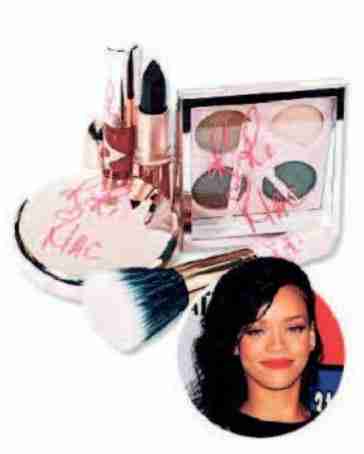 Rihanna and MAC Team Up

NEW YORK (AP) – Worokya Duncan is the director of inclusion for a private school in Manhattan, so her embrace of diversity is a no-brainer. She’s also a big makeup person frustrated over the years by cosmetics companies that don’t seem to get how important it is for women of color like her to be serviced, too.

“No line really had what I considered my shade of foundation,” she said. “There was always like an orange line somewhere. I would have to have my hair down so you couldn’t see where the foundation color and my actual skin color separated. Why is it so hard? Because people still find it novel that there’s beauty found in black and brown bodies in the first place.”

Enter one doozy of a beauty: Rihanna. She launched her Fenty Beauty line earlier this month to raves from industry media and consumers alike.

The superstar spent two years developing her products, which include 40 shades of matte foundations, from the palest of pale to deep, deep brown with cool undertones.

“We’re all just, like, giddy over here,” said Julee Wilson, the fashion and beauty editor for Essence. “I knew that she was going to be thoughtful. You expect that from a woman of color coming out with a cosmetics line, but I was honestly shocked at how inclusive the line is.”

The cruelty-free collection has been selling out since Rihanna launched it online and in Sephora and Harvey Nichols stores Sept. 7 across 17 countries. Darker shades of foundation went first, challenging the notion that the consumer market in those colors isn’t worth it to the bottom lines of beauty brands.

Wilson and Cat Quinn, the beauty director for the millennial-focused lifestyle site Refinery29, were in a small group of beauty editors who met with Rihanna before the launch to hear her explain her vision.

“I think the thing that people are connecting to most, and why this is doing so well, is because you can really feel the passion and the purpose behind this line,” Quinn said. “It’s not another celebrity makeup line that sometimes people feel a little disconnected with. For her, she saw a gap in the market. She saw women not being represented.”

In addition to foundations, the line includes a range of palettes and sticks, all developed with help from a prestigious beauty brand incubator called Kendo (it helped launch Kat Von D and Marc Jacobs in cosmetics, too.) Launching such a vast range of shades at once in so many countries is unusual in beauty, Quinn said.

Television host Hilari Younger, in Bethesda, Maryland, was first in line on launch day at a Sephora in a mall in her hometown. She spent $270 on Fenty Beauty.

“My skin tone is on the mocha, clove side. I’ve tried custom blends, very exclusive lines. The beauty industry is not here for the dark-skinned girls. Either they put too much red in the makeup or it’s too yellow or it’s too oily or it’s just not available,” she said. “This makeup is magical. I was completely skeptical but pleasantly surprised.”

Shavonne Fagan, the manager of a New York clothing store, was in the crowd at a midnight launch event featuring Rihanna at a Sephora in Times Square, but Fagan’s foundation shade quickly sold out, so she hit up a different New York store several days later and dropped $150 on Fenty Beauty.

“Before Fenty came out there were only three foundations I could find that matched my skin and only one that got my undertone right,” she said. “It’s terribly frustrating. One girl started to cry in the Sephora when the person put the foundation on her skin and it matched.”

Rihanna herself told the AP in a recent interview she relied on friends of all colors to help test the line, “because I feel horrible excluding people from things that I created for them.”

The beauty editors said quality was key for a splashy launch of this kind.

“You know, you can match everyone with a foundation, but if the foundation sucks then it doesn’t really serve its purpose,” Quinn said. “It’s actually a really amazing foundation. It’s super long wearing. It’s lightweight but it has really good coverage. Rihanna told us she wanted something that’s sweat proof and life proof and it really is.”

Wilson and Quinn agreed that Rihanna’s move into beauty is more than just makeup.

“It’s become more like a social movement. People are posting pictures and personal stories, like a woman on Instagram with albinism who grew up never having a foundation shade that was light with peach undertones, or a woman with really dark skin who could never find the right undertones. You’re seeing buzz that’s really moving,” Quinn said.

Celebrities of color have also taken notice. Gabourey Sidibe posted a photo of support wearing Fenty foundation and a 2-year-old girl having some sparkly Rihanna makeup fun has popped up on YouTube .

The product packaging is magnetized, so the cases stick together in a cosmetics bag, and there’s plenty of room for the line to grow. There’s only one lip product, a universal tube called Gloss Bomb, for instance, and there’s no mascara, dedicated eyeshadow or eyeliner, though some of those will be coming Oct. 13. There’s a blotting paper dispenser with a little mirror inside, because Rihanna hates shine, and the line includes brushes and a sponge. One brush she specifically designed in the shape of a shark’s tooth, angled for more precise application of highlighter.