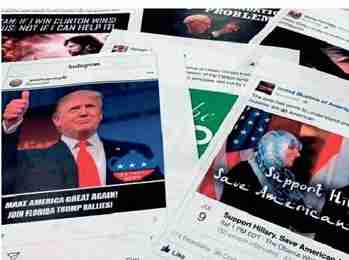 WASHINGTON (AP) – In three exhaustive hearings last week, executives from Facebook, Twitter and Google acknowledged that their platforms were used by Russia to try and create division over such disparate issues as immigration, gun control and politics. House investigators released a trove of Facebook and Twitter ads that showed just how extraordinary the cyber intrusion was.

The companies’ admissions and disclosures over the last several months have given congressional investigators one of their first real wins in the Russia probes. The committees have been frustrated by delays – and overshadowed by special counsel Robert Mueller – since they launched probes into Russian interference in the 2016 election earlier this year. Initially dismissive of Russia’s threat, all three companies have pledged improvements since lawmakers ramped up pressure and called them to testify.

It’s unclear what next steps Congress will take. The top Democrat on the Senate intelligence panel, Virginia Sen. Mark Warner, has co-sponsored legislation that would bring political ad rules from TV, radio and print to the internet. Warner calls it “the lightest touch possible,” but many Republicans have been lukewarm.

California Rep. Adam Schiff, the senior Democrat on the House intelligence panel, said he thinks such advertising. regulations for social media are “inevitable,” but noted that many of the fixes will come down to the companies’ own social responsibility.

“Congress isn’t going to prescribe an algorithm, so there are limits to what we can feasibly do,” Schiff said after his committee’s hearing Wednesday.

The few dozen ads are a sampling from more than 3,000 Russia-linked ads Facebook had turned over to the committee. Seen by millions of people, they encouraged street demonstrations against Donald Trump and Hillary Clinton and fostered support and opposition to Bernie Sanders, Muslims, gays, blacks and the icons of the Civil Rights movement.

The ads underscore how foreign agents sought to sow confusion, anger and discord among Americans through messages on hot-button topics. U.S. intelligence services say the Russian use of social media was part of a broad effort to sway the 2016 presidential election in favor of Trump. Mueller is investigating whether the Kremlin worked with the Trump campaign to influence the election.

Many of the ads also show careful targeting, with messages geared toward particular audiences. One ad, aimed at those with interests in civil rights and their leaders, highlights a man who claims to be Bill Clinton’s illegitimate son. Another video parodying Trump was targeted at blacks who also are interested in BlackNews.com, HuffPost Politics or HuffPost Black Voices.

In preparation for hearings this week, Facebook disclosed that content generated by a Russian group, the Internet Research Agency, potentially reached as many as 126 million users. Company executives said that going forward they would verify political ad buyers in federal elections, requiring them to reveal correct names and locations. The site will also create new graphics where users can click on the ads and find out more about who’s behind them.

But that did not prevent hours of questioning during two days of hearings, with lawmakers expressing exasperation at the seeming inability to thwart foreign intervention.

At one point, Sen. Al Franken put his head in his hands after he couldn’t get all the companies to commit to not accepting political ads bought with foreign currency. Several ads touting Facebook pages called Back the Badge,” “Being Patriotic,” “Blacktivist,” “South United” and “Woke Blacks” were labeled as being paid for in rubles using Qiwi, a Moscowbased payment provider that aims to serve “the new generation in Russia” and former Russian republics, according to the company’s website.

“Google has all knowledge that man has ever developed,” the Minnesota Democrat said. “You can’t put together rubles with a political ad and go like, `Hmmm, those data points spell out something pretty bad?’”

Besides the ads released by lawmakers on the House intelligence committee, Democrats on the panel also released four tweets from RT, a Russian state-sponsored television network, and nearly 3,000 Twitter handles active during the final months of the election.

One advertisement cited a real October 2016 news story – about a gunman’s battle with Boston police officers – then used it to attack Hillary Clinton as “the main hardliner against cops” and to promote Trump as the candidate who can “defend the police from terrorists.”

Three of the tweets referenced Clinton, including one that linked to an RT story about the release of a batch of hacked emails from her campaign chairman, John Podesta.

Some 34,000 Trump supporters were shown an ad calling for Clinton’s removal from the ballot, citing “dynastic succession of the Clinton family” as a breach of core principles laid out by the Founding Fathers. Clicking on it took Facebook users to a petition at WhiteHouse.gov.

Though U.S. intelligence officials believe the social media effort was aimed at aiding Trump, there are other indications it was intended to sow general divisions.

One ad promoted a Nov. 12 anti-Trump rally in New York City, titled “Not My President.” Large anti-Trump rallies actually did take place around the country that day in major American cities. That doesn’t mean the Russian accounts planned the events, but rather that they were piggybacking on existing protests and promoting them to like-minded people.