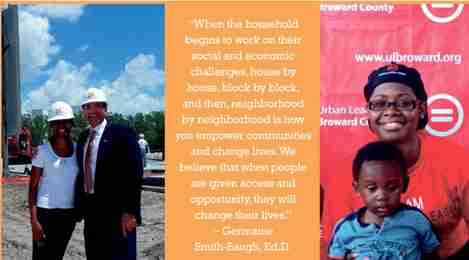 FT. LAUDERDALE, Fla. – Germaine Smith-Baugh was accepted into the University of Miami’s highly competitive five-year architecture program, but quickly realized that while her life would indeed be involved in building something substantial, it would have nothing to do with bricks and mortar.

What she has been building are better lives for black children and families residing in the 33311 zip code of Ft. Lauderdale. Using as her blueprint a vision based in authenticity and best practice, Smith-Baugh this month celebrates 20 years with the Urban League of Broward County; ten of those years as its leader.

Reading Kaffir Boy by Mark Mathabane in high school piqued her interest in architecture, or at least she thought. “I read a book…that talked about apartheid in South Africa from a little boy’s perspective, so I decided I want to be an architect and go to South Africa because they would need to re-build these shanty towns when apartheid is no longer,” she explained.

After spending time actually studying architecture, she soon discovered, “It was never really about the love of architecture.” Instead, Smith-Baugh realized what she wanted to know was, “How do you become an architect of community, and what can that look like?”

That question took her from the UM to Florida State University, where she earned a bachelor’s in Business Communication and a master’s degree in Social Work Administration. In 2005, she received her doctorate from Nova Southeastern University in Organizational Leadership with a concentration in Non-Profit Leadership and Management; a part of the natural progression to her becoming the CEO of the ULBC in 2006 after working there for 10 years as a program coordinator.

Listening to the married mother of two talk about the work that she and her team do at the Urban League brings to mind words like intention and integrity. Asked to share her greatest accomplishments, she rules out what people would expect her to say – construction of the ULBC’s state of the art community empowerment center, or hosting the 2015 National Urban League conference.

While pleased with those major feats, Smith-Baugh identifies her relationship with her staff as her greatest professional accomplishment. “A staff member walked up to me and …she re- counted a story that I shared (during a lunch meeting) impacted her and changed the way that she sees things. That’s the biggest accomplishment,” referring to her practice of engaging new employees.

Adding perspective to the empowerment center and UL conference, SmithBaugh said, “Things like buildings come and go, conferences are an experience, but when you really get to engage with people from a leadership perspective, that’s the stuff that’s impactful.”

Courtnee M. Biscardi is vice president of operations at ULBC and attributes her growth as a leader to Smith-Baugh.

“Working for Germaine has been both an honor and a pleasure. It is said that you are not a leader until you’ve produced another leader. I’ve worked under her leadership for nearly 10 years and there’s no coincidence that I have tremendously grown during my time at the Urban League because of her.”

A deep thinker whose approach to leadership and engaging the community comes from a philosophy of genuine intention, Smith-Baugh has her sights on generational transformation for the black community. She sees the fruits of the ULBC’s labor and anticipates it will continue, but with the community increasingly taking its place at the table.

“The way that we’ve been able to grow the organization programmatically with signature programs around housing, working really diligently with youth who might have committed first time or minor offenses and getting them back on track and helping people to get jobs through training opportunities,” are examples of the agency’s effectiveness, Smith-Baugh shared.

Smith-Baugh and her staff, through a very relationship-focused agenda, have created a space for community members to not only identify transformational ideas; but to actually discuss and take action on them. Building on the ULBC’s juvenile diversion programs that serve to keep youthful offenders out of the system, the community stepped up with its own solution when a rash of burglaries was committed in recent years.

“The community…wanted to figure out how it could be different. They were trying to figure out what could we do as a community,” she explained. The result included community residents partnering with the ULBC, with funding from the Children’s Services Council to create The Village.

“The Village volunteered as mentors, coaches and leaders,” and came together in a way that could be “more impactful,” she explained. “It’s the idea of coming together in that way makes a difference.”

CHILDREN DO WHAT THEY SEE

Her thoughts about unemployment and how it impacts communities lend themselves to a deeper analysis that goes far beyond examining data points. A recent ‘community café’ brought together about 40 stakeholders to discuss unemployment in Broward County. While the area boasts a 4.4 percent rate, Smith-Baugh said, the double digit unemployment in black and brown communities begs for a different conversation.

“It’s really not about a number,” she said. The more important question is, “What does concentrated unemployment do to a community?” She uses the morning ritual in her own community as comparison.

“In my neighborhood, At a 7 to 7:30 in the morning, everyone is walking out of their houses, getting in their cars, waving at each other, ‘have a good day,’ dropping their kids to school and going to work,” she shared. “What our children see is people get up and going to work.”

Contrast that daily visual with what children who live in areas with concentrated unemployment and protracted poverty see, Smith-Baugh explained, “and it changes the literal fabric of what the community looks like and what our children experience. What they experience is what they’re going to replicate.”

The ULBC’s approach of “Empowering communities and changing lives,” she said, “focuses on the common denominator in any community – family.”

“When the household begins to work on their social and economic challenges, house by house, block by block, and then, neighborhood by neighborhood is how you empower communities and change lives,” she explained. “We believe that when people are given access and opportunity, they will change their lives.”