Wells Fargo CEO to emplyees: ‘We’re Sorry’ for the pain 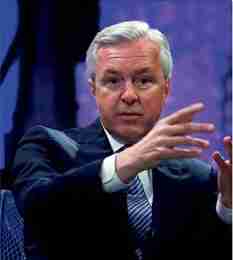 NEW YORK — Newly appointed Wells Fargo CEO Tim Sloan told employees Tuesday that he is “sorry for the pain” that the bank’s employees have suffered as a result of the company’s sales practices scandal.

Sloan’s company-wide speech given Tuesday is the latest effort by Wells Fargo’s executives to atone for the fact that the bank’s employees, pushed to the limit by impossible sales goals, opened as many as 2 million bank and credit card accounts without customers’ authorization.

In the speech, Sloan acknowledged that the bank did not respond to the problems in its branches soon enough and that upper management dodged responsibility for the bad behavior and wrongly placed blamed on its branch employees. “Many felt we blamed our teammembers. That one still hurts, and I am committed to rectifying it,” Sloan said.

Wells Fargo is enveloped in the biggest scandal in its 164-year history, which earlier this month forced the abrupt retirement this month of its CEO, John Stumpf. The bank faces several class action lawsuits, as well as criminal investigations by the Department of Justice and the California Attorney General’s Office.

There are also concerns that customers are leaving the bank, or at least paring back their business with Wells. In its quarterly earnings report released this month, Wells reported double-digit percentage drops in bank account openings as well as declines in bank branch traffic.

While Wells Fargo has been apologetic to the media, its customers and livid politicians for its behavior, the bank had done little to make amends with its roughly 260,000 employees. While the sales scandal made headlines, the outrage grew after Stumpf did media interviews in which he seemed to blame employees, who often earn less than $15 an hour, for what happened.

Then came the reports from Wells Fargo employees that they were retaliated against for trying to raise awareness of the sales practices. There also were stories of employees developing stress-related health problems.

Acknowledging that Wells’ troubles are far from over, Sloan warned employees to expect more difficult days.

“You also should expect more tough headlines, as additional accountability actions occur, and other investigations and reviews are completed. Some of that is going to be very painful for us,” Sloan said.

The speech comes as Wells Fargo has launched a new advertising campaign this week to address the scandal. The television campaign, which began Monday, is being rolled out nationally on major network evening newscasts as well as the Sunday talk shows. Wells is also buying ads on the major Spanish language networks Telemundo and Univision, said Wells Fargo spokesman Mark Folk.

Next post Who are you with Clinton vs. Trump?