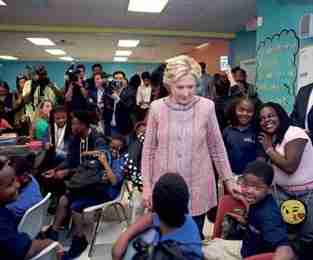 MIAMI – During her visit to the Overtown Youth Center on Oct. 11, Democratic presidential nominee Hillary Clinton spoke to the assembled students about the importance of a college education. She shared her intention, if elected, to provide free college at public institutions and emphasized that HBCUs (Historically Black Colleges and Universities) would be a priority for her administration.

“We were talking about college preparation and ideas for what they want to do, what they want to study and the cost of college came up. That’s a big deal for our young people,” said Tracy Wilson Mourning, wife of Overtown Youth Center co-founder, Alonzo Mourning; both of whom greeted Clinton and joined her in addressing the students.

In response to the issue of college affordability, Cliton said, “It’s absolutely important that we get the cost of college down so every one of you can afford to go to college.”

She then went on to explain her plan for students to attend public colleges and university free of charge. “You don’t have borrow money, you don’t have to worry about money, you can get your college education. And that’s exactly what we’re going to try to do because too many young people get stopped from going to college because they can’t afford it.”

Clinton’s opponent, Republican nominee Donald Trump’s education plan includes an intention to “Work with Congress on reforms to ensure universities are making a good faith effort to reduce the cost of college and student debt in exchange for the federal tax breaks and tax dollars,” according to his website. Trump’s plan will also, “Ensure that the opportunity to attend a two or four-year college, or to pursue a trade or a skill set through vocational and technical education, will be easier to access, pay for, and finish.”

When Clinton asked the group if they’d heard of HBCUs, several hands went up.

Her plan for free college also extends to public HBCUs. Clinton’s education plan, The New College Compact, “will support, encourage, and reward the HBCUs that help our students succeed so students can complete college, without costs being a barrier or debt holding them back,” according to her website.

She said she’ll pay special attention to HBCUs “because they’ve done a great job of educating generations and I want to make sure they have the facilities and equipment and teachers they need.”

Essentially signed into existence in 1980 by President Jimmy Carter, the White House Initiative on HBCUs has been tweaked over the years by presidents Reagan, Clinton and George W. Bush. Earlier this year, President Obama signed an executive order renewing the program. Critics say the program has not done enough to help HBCUs, several of which have closed over the past several years.

Perhaps as a nod to the Democratic party’s support of HBCUs, Obama is campaigning for Clinton today at Florida Memorial University, South Florida’s only HBCU.

Wilson Mourning, a graduate of Howard University in Washington, D.C., announced on her Facebook page that she would be traveling there this week to present a scholarship to a Howard student who is a graduate of Alonzo and Tracy Mourning Senior High School.

Previous post Deplorable in Chief vs. President of the United States