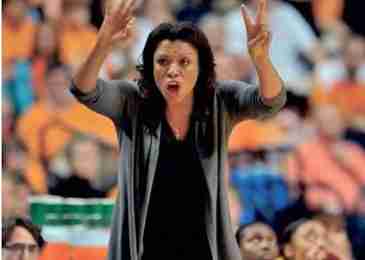 ORLANDO, Fla. – Racial and gender hiring practices in college sports have improved slightly from a year ago but still lag behind those in professional sports, according to a diversity report released Thursday.

The annual report card from The Institute for Diversity and Ethics in Sport (TIDES) reveals that in 2015, hiring for women made a slight improvement, while hiring for minorities took a marginal step backward from 2014.

Richard Lapchick, the primary author of the report and director of University of Central Florida-based TIDES, is encouraged that the numbers have im- proved but said much more needs to be done.

He advocates for a rule that would man- date NCAA member institutions to interview a diverse pool of candidates for senior-level positions including coaches. The NFL has a similar rule known as Rooney Rule. Lapchick would like the college rule to be named for Hall of Fame football coach Eddie Robison, who won 408 games at historically black Grambling over a 57-year career. College sports had the lowest grade for racial hiring practices among all sports groups or organizations reviewed by TIDES, while only the NFL had worse numbers when it came to gender hiring practices of the professional and college sports leagues the organization tracks. It also produces report cards on the NBA, WNBA and Major League Baseball, among others.

More minorities got Division I football and men’s and women’s basketball jobs in 2015, according to the report. But more than 60 percent of all women’s teams are still coached by men at the highest level in college sports. “To me, college sports has been the most disappointing of all of the report cards that we do, since I’ve been involved with higher education for 45 years,” Lapchick said. “When you look at the percentage of women who are head coaches of women’s teams and assistant coaches on women’s teams 44 years after Title IX and we are still less than 40 per- cent of head coaches of women’s teams being women and less than 50 percent of the assistant coaches. That’s a problem when 90 percent of the head coaches in both men’s and women’s sports across all three divisions are white.”

While the number of minorities coaching football improved in 2015, the percentage is nowhere close to the racial breakdown on the field. African-Americans make up 53.4 percent of the players in the Football Bowl Subdivision level, while whites make up 41.4 percent, Latinos 2.2 percent and Asian/Pacific Island players 2.4 percent. The head coaches are still overwhelmingly white at the highest level of college football at nearly 88 percent. Only 16 of the coaches who began the 2015 season at the 128 FBS institutions were minorities, a slight improvement over the 14 who began the 2014 season.

Part of the problem could be linked to who is doing the hiring. Whites made up 87.5 percent of the athletic directors during 2014-15 year, and nearly 90 percent of the FBS presidents in 2015 were white. Of the 10 FBS commissioners, all were white and only one is not male. Judy MacLeod of Conference USA was named the first female commissioner in the FBS in October.