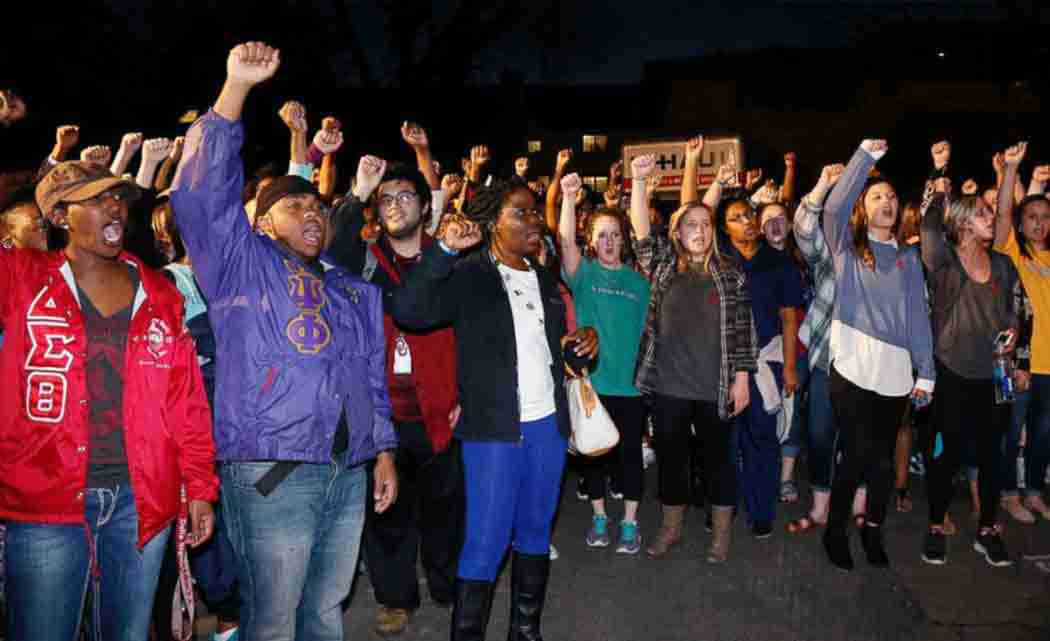 NORMAN, Okla. —  A video of University of Oklahoma fraternity members engaging in a racist chant outraged and angered students across the campus, but its release also has sparked a dialogue that many students hope will lead to positive changes at the school.

Protests and rallies have been held every day on the campus in Norman since the release earlier this week of the video, which shows students participating in a chant that referenced lynching and indicates black students would never be admitted to OU’s chapter of Sigma Alpha Epsilon. On Wednesday, a town hall-style forum on diversity was held with members of the black student group Unheard, and a spokeswoman for the group said the incident appeared to be serving as a catalyst for change.

“Just the students coming together has been a positive for me,” said Alexis Hall, a 20-year-old junior from Houston. “I think this is sparking a university-wide movement of: `Hey, we need to start making some changes. We’re going to improve things and make it better for all of our students.”’

Among the group’s grievances are low numbers of black faculty and administrators, poor retention rates among black students and a lack of programs aimed at supporting black students.

OU President David Boren booted the fraternity from campus and expelled two of its members for creating a hostile learning environment. He said that university officials already had been working with Unheard, which formed after the police shooting of 18-year-old Michael Brown in Ferguson, Missouri, to address some of their concerns and that those efforts would continue.

“They met with me. They had some very positive suggestions,” Boren said. He said their proposals included greater representation of black students at the university’s orientation camp and on various committees, to ensure that “the whole range of diversity of our campus is represented.”

On Wednesday, Boren announced the creation of a new position _ vice president for the university community. The person in that role, who has not yet been hired, will be responsible for overseeing diversity programs and will report directly to the president.

Mary Moore and her 16-year-old daughter, Maddi, said they considered backing out of their visit after the video surfaced but changed their minds, mostly because of the swift action taken by Boren.

“If they definitely didn’t do anything about it, … I probably wouldn’t have come here,” said Maddi Moore, a high school junior from the Dallas suburb of Southlake.

When the Christian student group Intervarsity set up a display on OU’s campus two weeks ago to solicit feedback from students on race relations and other issues, response was tepid, said Rubin Samuel, a 22-year-old electrical engineering senior from Moore. The same display this week drew dozens of students, many of them eager to talk about race, diversity on campus and other issues surrounding the release of the video.

“I think the way to move forward with something like this is to keep it in our conversations, not sweep it under the rug after a few weeks,” said Samuel, who is Indian-American.

Late Wednesday night, the board of trustees and alumni of the University of Oklahoma’s SAE chapter released a statement acknowledging the chant surfaced at the chapter “three to four years ago and was not immediately and totally stopped. It should have been.”

The involvement of at least two students from the Dallas area in the SAE racist video controversy prompted soul-searching in Texas too.

Dallas Mayor Mike Rawlings is a member of the board of trustees of Jesuit College Preparatory School, a Catholic school attended by one of the SAE chant leaders. He said he was “appalled” by the video.

“This is real, it’s got to be dealt with, and we’ve got to be honest about it,” Rawlings said.

At the University of Texas in Austin, the president of the local SAE issued a statement denying that his chapter had ever performed a similar chant. Luke Cone said he could “speak on the behalf of my fraternity brothers that we are all profoundly distressed” about the language in the video.

On Wednesday evening, a Dallas-area advocacy group, the Next Generation Action Network, protested at the family home of Parker Rice, who has apologized for participating in the chant, calling it a “horrible mistake” and “a devastating lesson.” About 20 demonstrators marched up and down the street in front of his North Dallas home chanting, “Racism is taught,” and, “Racism is a choice.”

Meanwhile, the parents of another student in the video, Levi Pettit, released a statement saying he too had “made a horrible mistake, and will live with the consequences forever.” Pettit also is from the Dallas area.