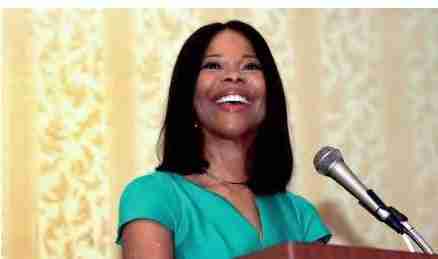 PALM BEACH GARDENS Fla. – Talented actress, Angela Robinson, of the Tyler Perry mega-hit TV show, The Haves and the Have Nots, certainly did not disappoint the nearly 400 fans and Florida A & M University alumni Saturday night as she took to the stage as keynote speaker for the 2nd Annual Florida A & M Alumni Scholarship Gala held at the PGA Marriott in Palm Beach Gardens. In fact, she left many in awe of her kindness, humility, compassion, extreme intellect and her dedication to helping others.

She continuously posed for photos and selfies, giving her fans what they wanted and more. Audience members said in person, she’s a far cry from the character, “Veronica Harrington,” whom she portrays on the prime time Oprah Winfrey Network hit show. On screen, she plays a rich snob who stops at nothing with her cruelty -whether it’s with family or foes.

In real life, Robinson wowed the audience with her profound love of FAMU, her love of family, community and her commitment to giving back. She nearly brought the crowd to tears with her staunch adoration of her mother and late father, whom it is apparent that she respects greatly despite the fact they did not share her dream of being an actor. But in the end, she said her father didn’t waver in his support of her performances.

He came to every one of them. He, too, was a FAMU alumnae and was a beacon of light in his community, she said. He was her greatest mentor and she dedicated her speech, in part, to him. “He is a guiding light in my life,” she said, beaming.

It was her mother, however, who –indirectly — sparked the “acting bug” in her. Her mom was head of a school drama department, and as a ten year old girl, she fell in love with acting while watching the actors perform. She knew then, that’s what she wanted to do with her life. “I would leave the performances and go home and sing and act.” But as her parents realized she was incessant about acting, they discouraged her, instead wanting her to get a teaching degree.

But she followed her heart and the rest is history. Both parents got on board –after she proved she could make a decent living. They only wanted the best for her, she said.

Today, she believes in saying “yes” to the dreams of others. She is so dogged about others pursuing their dreams, in part, because she missed out on that early encouragement. “Their (her parents) opinions meant everything to me. But the one thing I believed I was born to do –they didn’t support. As a result, I’ve learned to say “yes” to people’s possibilities. Chase your dreams down like your life depends on it –because it does!” she told the crowd. “We were all born with seeds of possibilities. Your seeds will always be about purpose -not fame.”

Robinson said her nature is to encourage others, as she believes she was called to do so. She and her husband of 20 years have a company, the White Robin Group, which offers scholarships and workshops to aspiring actors who just don’t have the money to pursue their dreams of acting. “Mentorship is one of my favorite subjects. We tell them to pay us back by helping someone else along the way,” she said.

She also wants others to know they should never abandon their dreams. “Don’t quit. Don’t edit your dream. Don’t water them down. The only reason people change their dream is out of fear. Don’t let fear rob you of your dream.”

Robinson said at one point in her career, she had moved back to Jacksonville (her hometown) and was working steadily and doing well.

But a mentor told her he wasn’t going to hire her for the new season because it was time for her to spread her wings. He almost literally kicked her out of Jacksonville and encouraged her to go to New York to grow as an actor and performer. She took his advice and it paid off. “My dreams of lights and Broadway were finally coming true,” she quipped.

Now, in the riveting role of “Veronica Harrington,” she is getting rave reviews. She plays the role of a villain so well that people sometimes misconstrue the role from her real life. “I don’t have children. I don’t hit my child. I’ve been married for 20 years….but I’ve had someone actually threaten to kill me because of the way I treat my child on the show!” But Robinson said it’s a testament to how well she portrays her character. “It’s actually the highest compliment you can get as an actor.”