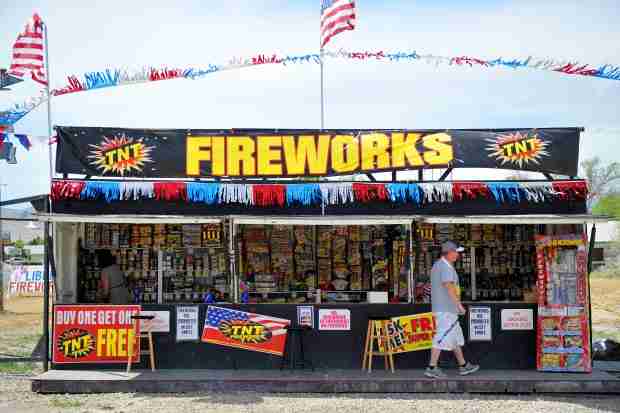 FLORENCE, Ala. (AP) _ Fireworks stands have begun opening in areas that allow such sales around the Shoals.

In at least two cities, those involved in cash-strapped high school extracurricular activities are using the opportunity to do some fundraising.

“This is the third year we’ve done this fundraiser for our program,” said Hufstedler, whose unusual June itinerary illustrates the impact of strained school budgets on football programs.

“Would I rather be at the beach with my family? Sure, but I feel like I owe it to our kids and community,” he said.

Football teams traditionally never had to worry about funding, at least not the way extracurricular activities such as band, cheerleaders and even some spring sports did.

“They’d give you so much money before the school year, and if you had any excess, you’d take it and start over,” Hufstedler said of his early days in coaching. “Now, everything we do, we have to come up with the money.”

As athletic director, Hufstedler knows how each program is funded, so he understands the reality of the times.

“It’s hard to go to my superintendent and say I need money if I turn down opportunities to raise money,” he said. “And we get a lot of support from the community.”

Another stand near Lee Highway and Hatch Boulevard sponsored by Sheffield High is run by the school baseball team.

“Last year, we were almost identical in sales _ about $100 difference. It was weird,” Hufstedler said. “We work together and send people to each other’s stand if there’s something we don’t have, and we’re tax-free because we’re a nonprofit.”

Band grandparent Lillian Reeder, parent Marlin Johns and a group of students were eager to earn enough money to pay for band camp, which starts July 7.

“We’ve been doing this at least six or seven years,” said A.J. Cole, a recent Florence High graduate who was the band’s drum major last year. He wasn’t actively selling fireworks. “I just show up,” he said.

“We have four-hour shifts,” Reeder said.

The group agreed bottle rockets are the most common seller, but they arguably were more taken with the expensive stuff, including the Illuminati Cookie and a sampler of a little bit of everything that sells for $199.

Marlin Johns said band members and boosters will be working the stand through July 5. They started Saturday.

“Last year, we raised a lot of money because we had the drummers out front,” Billings said. “They get people’s attention.”

Reeder said “anything that’s a bargain” gets people’s attention. And she hopes people will stop by to sign up for the group’s big giveaway _ a $149 package of fireworks that will be given to the winner of a random drawing July 3.

After the holiday, the teams and bands will be able to breathe easier, knowing some of the coming season’s expenses are covered.

“It makes a difference,” Hofstedler said. “Nowadays, every dime does.”

Next post Drone designed to appeal to youngsters in the classroom