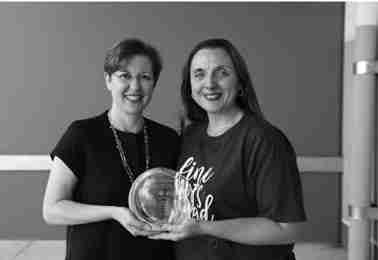 BELLE GLADE, Fla.- Creativity pays, both in exciting students to learn and for the teachers who embrace it in the classroom. Glade View Elementary School Dance and Choice Program Coordinator Sonja Kelly won the 2018 League Educator Apple Award, which acknowledge the efforts of teachers and advocates who support programs relating to Broadway or Touring Broadway shows, promoting further development of theatre education.
Kelly was selected for her dedication to introducing students to the performing arts. Her recent work with the Kravis Center’s annual Broadway Reach program included a ten-week dance residency in conjunction with the touring production of Rodgers & Hammerstein’s The King and I and concluded with a performance of 30 third grade students prior to a matinee of the show. The overwhelmingly positive response to the program is a testament to Ms. Kelly’s strong leadership and her commitment to students and community.

Kelly is one of only four award winners from across the United States.

“The Broadway League has been recognizing teachers, administrators, school district heads, and advocates from around the country for their commitment to arts education since 2003. We are proud to honor these outstanding individuals for their work in collaboration with Broadway League member venues that present Broadway and Touring Broadway shows,” said Charlotte St. Martin, President of the Broadway League. “Enriching young minds with the power of the arts is crucial to our communities and the future of live theatre. Through this award and other initiatives, we encourage the ongoing development of theatre education programs nationally.”