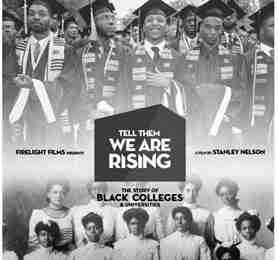 “Tell Them We Are Rising: The Story of Historically Black Colleges and Universities” is the first and only feature documentary and multi-platform project to research, gather and share a rich mosaic of stories that relay the history of HBCUs.

The two-hour film and multi- platform project by award-winning documentary filmmaker Stanley Nelson, explores the pivotal role HBCUs have played in the ascent of African Americans and their families – from slavery to the present day. The film also examines the impact HBCUs have had on American history, culture and national identity.

Though the film focuses on HBCU’s, it is a story for everyone. The film and supporting multimedia platform will expertly connect snapshots from a long and rich history to contemporary understandings of HBCUs.

It will inspire debate, conversation, pride and memories that are necessary to understand the past and chart the future of HBCUs.

HBCUs have been at the margins of the American collective conscience despite their role in shaping Black life, dismantling desegregation and birthing and growing the Black middle class. Its compelling narrative and original footage will show Americans that HBCUs have touched all Americans – regardless of race.

You can be part of “Tell Them We Are Rising.” Firelight Films needs your help to create the #HBCURising Yearbook, a crowd-sourced archive highlighting HBCU life from the first school’s founding to present day.

Please share anything that connects you and your family to the unique HBCU experience including: photos, articles, grand-parent and/or great grand-parent letters and journal entries, videos, transcripts and/or short stories of personal encounters with HBCU students or at HBCUs.

The film is slated to air in October this year on the PBS primetime series “Independent Lens.”