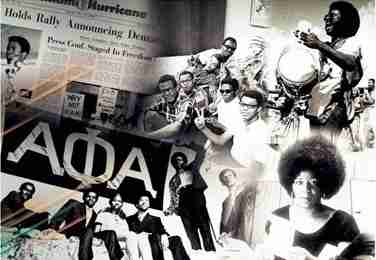 CORAL GABLES, Fla. – It wasn’t the Greensboro sit-in of 1960, when four 17year-old African American college students continued to sit in silent protest at a luncheonette counter at Woolworth’s after being refused service. But to Harold Long and 13 other University of Miami black students, the cause was just as important. They wanted more black students to be enrolled, more scholarships for minorities, African American history courses and black professors to teach them.

So with unwavering resolve and a social consciousness indicative of the times, Long and the 13 others, all members of the fledgling United Black Students (UBS) organization he founded, marched into UM President Henry King Stanford’s second-floor office in the Ashe Building on May 17, 1968, and quickly sat on the couches and floor, demanding that the administration take action on their demands.

“We felt the center of activity at the University was the Office of the President,” recounted Long. “We had to do something, and we decided that [a sit-in] was the way to go. We knew we weren’t leaving voluntarily, and if it meant we were going to be arrested, so be it.”

And they were arrested, though charges were later dropped. Trailblazers Honored Now Long and hundreds of other students who were among the first African Americans to attend the University of Miami after its board of directors voted in 1961 to “admit qualified students without regard to race or color” are being honored by UM as pioneers – trailblazers who not only broke the color barrier at the institution, but also helped foster academic and institutional changes at the school.

A weekend extravaganza, “UTrailblazers: Celebrating Our First Black Graduates,” is scheduled for February 24 and 25 on UM’s Coral Gables campus, and will include such activities as an alumni/student forum, spoken word recitals, remarks by Long and Miami attorney George Knox, music and dance performances, special recognition of alumni, faculty, administrators, and more.

In concert with the celebration, UM Libraries’ University Archives is presenting “We Were Pioneers,” an exhibition on view in the Richter Library’s first-floor gallery through February 26. Presented by the Lynda and Michael Gordon Exhibition Program and curated by University Archivist Koichi Tasa, the exhibition features historical photographs and documents, publications, memorabilia and other artifacts related to the University’s first African Americans students.

Both the weekend event and exhibition are part of the First Black Graduates Project, a UM Black Alumni Society initiative that honors the African American students – living and deceased – who graduated from UM during the 1960s and 1970s.

Now a private attorney in Miami, Long calls the project a landmark initiative.

“It brings together and recognizes all of the people who ushered in the era of integration at the University,” said Long, who enrolled at UM as a freshman in 1964, the same year U.S. President Lyndon B. Johnson signed the historic Civil Rights Act into law.

“I’ve read about many of the students who were the first blacks to attend UM, but I’ve met only a handful of them. It’s important that we all know about each other, and now this project is making that possible.”

He has Denise Mincey-Mills to thank for that.

Uncovering History
Five years ago, while attending an event that marked the 50th anniversary of desegregation at the University, Mincey-Mills, a 1979 UM graduate, became curious as to just how many black students were among the first to enroll and graduate from the institution. So she started looking through the pages of old Ibis yearbooks from the ’60s and ’70s, jotting down the names of black students who appeared in senior class photos, and then reaching out to the Registrar’s Office to verify their names and degrees.

She came up with close to 700 names, and the more she looked through those old yearbooks and other historical documents, the more she learned about UM’s first black graduates and the events that shaped the institution’s history during the civil rights era.

She discovered that the demands of and subsequent sit-in Long led would help hasten the creation of 25 new scholarships for black students and the hiring of the first black instructors; that Martin Luther King Jr. spoke on the UM campus two years before he was assassinated; that influential black politicians such as Julian Bond visited the University; and that UBS once published its own newspaper.

“I realized there was a story that needed to be told that hadn’t been told before,” said Mincey-Mills, who co-chairs the committee along with UM alums Phyllis E. Tyler and Antonio Junior.

“Trailblazers are the canaries in the coal mine,” said Donald Spivey, a professor of history in UM’s College of Arts and Sciences. “They help us to understand where we’ve been, where we are now, and where we’re going.”

Spivey, who will give a special lecture on February 24 as part of the Richter’s “We Were Pioneers” exhibit, said trailblazers such as UM’s first black graduates “represent a whole race of people. If you fail or succeed, they judge not just you, but they look at that as a measurement, a barometer of a whole group of people. Very unfair, but that’s the reality.”

Remembering Their Paths Six-foot, five-inch Ray Bellamy wasn’t thinking of himself as a trailblazer in the late ’60s when he was setting all kinds of Miami Hurricane receiving records as the first African American football athlete awarded a scholarship to a major university in the Southeast. Instead, he regarded himself as just a student for whom football was a way to escape the vegetable fields of Florida’s west coast.

“I came from a poor family of migrant workers, and we traveled wherever the crops were,” said Bellamy. “My mom and dad could not read or write. So my accomplishments on the football field didn’t have anything to do with me trying to put myself in a position to be a trailblazer. It had everything to do with me trying to make a difference in my life and take some pressure off my parents.”

Bellamy recalled some of the painful moments he endured as UM’s first black football player, including the day he discovered the words “N _ _ _ _ _ go home” written on his dorm room door. But he persevered, excelling on and off the gridiron, he became UM’s first black student body president.

Like Long, Bellamy credits former UM President Stanford, who’ll be honored posthumously at the February 25 gala, for playing an instrumental role in desegregating UM. The First Black Graduates Project, he said, is critical because “it shows the Miami-Dade community and the country that the University of Miami is a leader, whether it was in being among the first universities to integrate or the first to give athletic scholarships to minorities and women.”

Kim Sands can relate to Bellamy’s statement all too well. Raised in Miami’s Coconut Grove, she first picked up a tennis racquet at the age of 14, when one day, while playing basketball with her brother at a local inner-city park, the park manager and a visiting accomplished tennis player took notice of her athleticism and approached her with a proposition: They would sponsor her tennis lessons if she would take up the sport.

Sands agreed, excelling so quickly at the game that she entered her first tournament at 16 and went on to become one of the state’s best high school women’s tennis players.

She enrolled at UM in 1974, becoming the first African American woman to receive a scholarship to play tennis at the school. She also played on UM’s women’s hoops team, often running from basketball practice to the tennis facility.

Sands went on to play professionally, and she returned to UM to coach the women’s tennis team from 1990 to 1998. Now park supervisor at Miami’s Legion Memorial Park, Sands said the First Black Graduates Project can serve as a learning tool, a reminder for today’s students of the “sacrifices made by so many people before them.”

Inspiring Future Generations UM senior and current UBS President Beja Turner is inspired by UM’s first black graduates. “For students like me, they are the absolute picture of always standing up for yourself and your beliefs,” she said. “They were steadfast and bold, and never let themselves be swept to the side, and they built a community that celebrated and admired black culture on campus. By following the blueprint they created for us, I know anything can be accomplished.”

Miami attorney and School of Law alumnus George Knox, who will speak at the UTrailblazers Gala on February 25, is one of the many who set an example for Turner to follow, realizing the importance of higher education even as he grew up in the Deep South during the era of Jim Crow.

By the time he enrolled in law school at UM, the Civil Rights Act had already been signed. But Knox, part of the Miami Law Class of ’73, which was comprised of five other African Americans, including prominent attorney and UM Board of Trustees Vice Chair H.T. Smith, still had to battle negative perceptions of the time, chief among them a prevailing attitude among some faculty, administrators and students that black students who were being admitted were less than qualified.

Knox and the other black enrollees also had to wage a battle against their own selfdoubt.

“All of us were carrying our own extra baggage … There were expectations that black students would not perform well because of the assumption that we were less qualified than our non-black classmates. In addition, each of us was going through our own adjustment to the times,” Knox remembered. “We didn’t know whether to try to conform and be accepted and embraced and be accused of selling out, or whether we should rebel and join Malcolm X and all of the other outspoken militant, radical blacks who were also operating in the same time frame. And we still had to maintain grades. Looking back at those times,” continued Knox, “I have no clue how any of us survived the issues we were facing.”

But they did survive and go on to thrive in the profession. In the early 1970s, Knox would become the first black professor at the University of Arkansas law school, bonding with two other young law instructors at the Fayetteville campus, Bill and Hillary Clinton. “The students,” recalled Knox, “used to call us the Mod Squad.”

At only 32, Knox was appointed Miami’s city attorney, serving in that role from 1976 to 1982, a period during which he shepherded the legal process that led to the construction and development of major projects such as the Miami Convention Center/Hyatt Regency Hotel, the Miami Tower (which opened as the CenTrust Tower), and Bayside Marketplace.

Dorothy Wallace was on the verge of attending St. Louis University in Missouri in 1961 when she got the news that changed her plans: the University of Miami would start admitting black students. Suddenly, the young African-American schoolteacher saw an opportunity to stay in Miami to earn her master’s degree in education. So she applied and was accepted at UM, becoming part of the very first group of black students to enroll at the institution.

“We were searching for our identity and how we could fit into the society of that time,” said Wallace. Along with the challenge of adjusting to integration, came the difficult task of balancing graduate school with being a mother of six and a fulltime teacher. Support from family and friends, she said, helped her make it through.

Today, Wallace is honored that her trailblazing efforts are being recognized through the First Black Graduates Project. But she didn’t help break the color barrier at UM only for herself.