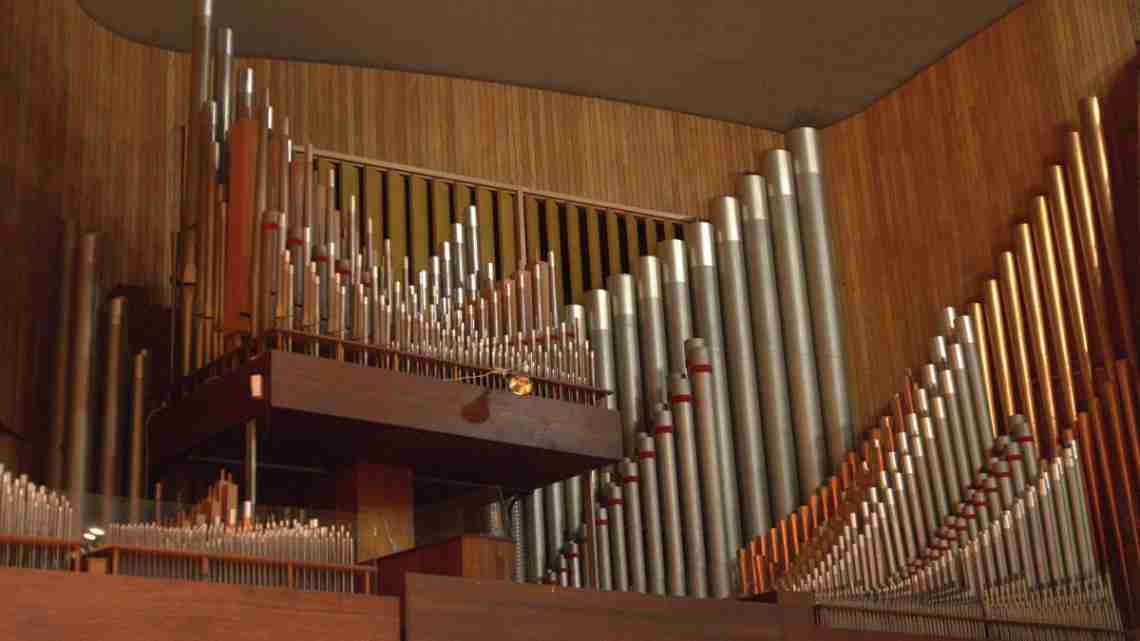 By AMY BIOLCHINI
The Holland Sentinel

However, he is the man behind the brand-new Casavant Frères concert pipe organ being installed this month at Hope College’s Jack H. Miller Center for Musical Arts.

“It was my dream and my wish that if a concert hall were built in Holland either by the city or by Hope . it was my dream to have a concert organ,” Roossien told The Holland Sentinel (http://bit.ly/1IOdYM7 ) .

Roossien, a retired Pfizer financial manager, brought up the idea of installing a pipe organ as soon as he heard of plans for the music center _ and agreed to donate the $1 million needed to purchase it.

“In a nutshell, if we’re going to have a first class concert hall (in Holland), it has to have a pipe organ,” Roossien said.

Construction at the new $33 million music center is on track. The building will open at the beginning of the 2015-16 school year.

The pipe organ that will preside over the building’s main 800-seat performance hall was custom-built by Casavant Frères of Saint-Hyacinthe in Quebec, Canada.

Roossien and Hope College’s organist and music professor Huw Lewis traveled to Canada to visit the organ before it was disassembled for its journey to Holland.

“Huw put it through its paces,” Roosien said.

Lewis, who has been teaching at Hope for 25 years, said the instrument will make the Jack H. Miller Center for the Musical Arts the only music hall in west Michigan with an embedded concert organ.

The first shipment of organ parts arrived during Tulip Time.

By November, the organ will be fully installed and ready for Lewis’ favorite part: voicing.

“Voicing” the organ is a technical term for the adjustments that are made to the organ’s pipes by a trained team of experts to make the organ’s sound fit the room.

“The dynamic of each pipe and the precise nature of each pipe are adjusted by hand, one by one,” Lewis said. “It’s a very time consuming business and a great art.”

The first concert with Hope’s new organ is being planned for February 2016, Lewis said.

“This concert hall we’ve been waiting for for a very long time,” Lewis said.

The new Casavant Frères organ will become the sixth organ on Hope’s campus.

A 15-year-old studio organ will also be moved into the new music center during the last part of June _ which requires it to be dismantled, packed, moved across campus and then recalibrated for its new space.

The Casavant Frères organ is designed to be played alongside an orchestra during a concert.

“This is quite demanding because when you play music with an orchestra, it requires that the sound of the organ be so quiet and distant that one can hardly hear it but it’s also expected to be able to play as loud as the whole orchestra all out,” Lewis said. “So it has to have a fantastic dynamic range.”

It’s not designed to accompany a choir in church, nor to be played solo, Lewis said. The organ can be used in those capacities _ but will sound as though it has a foreign accent, Lewis said.

“The existence of an instrument like this depends upon a donor enthusiast,” Lewis said of Roossien.

Though Roossien’s own music career was short-lived _ he recalled several short unsuccessful piano lessons _ Roossien’s fascination with organ music started with his father. After listening to their church’s pipe organ on Sunday mornings, his father would remark about the organist and performance over dinner afterwards.

“It’s kind of in my genes, I guess,” Roossien said.

The popularity of the pipe organ spans decades, Lewis said, noting that at one time, almost every great musician trained on the organ before developing their own works.

“The organ might well say, `The reports of my death are an exaggeration,”’ Lewis said, paraphrasing a Mark Twain quote. “Somehow, the organ seems to be this sort of eternal phoenix.”

Previous post Nebraska students to get look at transportation careers