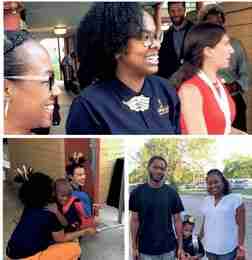 MIAMI – Monday was the first day of school in many Florida cities. In Liberty City, this annual milestone was even more significant for students arriving at the KIPP Sunrise Academy, the popular national program’s first foray into Miami.

Principal Leyla Bravo, KIPP staff and members of its board festively welcomed the youngsters and their parents into the school located at Poinciana Park Elementary, 6745 NW 23 Avenue. Bravo waved a magic wand as she greeted each student with hugs and high fives.

“Our goal is to help students unlock their genius and develop the knowledge and character strengths they need to succeed,” said Bravo, founding principal of the Miami school.

KIPP (Knowledge is Power Program) will share best practices and leadership development resources with MDCPS district, which approved its application and an initial five-year lease for Sunrise Academy to share space with Liberty City’s Poinciana Park Elementary, where the school plans to serve more than 150 students in grades kindergarten through first grade.

KIPP has been able to escape some of the public vs. charter criticism, apparently due to its nonprofit status and its track record of educating students in its network of 224 college-preparatory, public charter, early childhood, elementary, middle, and high schools.

The program reports that its Miami students will “have access to a safe learning environment that offers a unique curriculum derived from information gathered nationally through KIPP’s network, focused on academics and character building. Its extended school day allows for students to be exposed to a holistic learning environment comprised of both rich academics and extracurricular activities including visual and performing arts, sports and yoga.”

Bill Diggs, president of the Mourning Family Foundation, is board chairman for KIPP Sunrise Academy. Diggs said although the programs are not connected, their missions are aligned. As he greeted students and parents, Diggs explained the school’s short-term goal, which is to “learn exactly what the students’ needs are going to be.”

The long-term goals will include “building all the way through high school. We’ve got a dozen schools planned in the next 20 years,” Diggs explained of the plan to have the students graduating from KIPP high schools. “Then we’ll put them in a program called KIPP to College.”

Part of Diggs’ excitement is due to KIPP’s teachers.

“The young adults teaching here are all very radical in their thinking. The teachers came from all over the country,” said Diggs.

One of those teachers is Justin Leach, 32, a kindergarten partner teacher who said he was a part of a KIPP school in Washington, D.C.

“Coming down here to be a founding member…is a dream come true to be a part of something so special. It’s our foundation to help these children become better people, better students, well rounded in education over all.”

David and Sherelle Harden were both on hand with their five-year old daughter, Nylani, for her first day of kindergarten.

Sherelle learned about KIPP Miami when the school’s administrators visited Nylani’s previous school. “I was volunteering as parent president…and the principal came in. I just liked their energy and their vibe, and when they explained what the school would be about,” she shared.

As he held his daughter’s hand, he added, “I want to support her.”

KIPP Sunrise Academy is partnering with the Urban League of Greater Miami and its We Rise Educational Initiative.

“Part of KIPP’s success is its ability to engrain itself in the communities where it is working to make a difference and we’ve been very fortunate to partner with the organization to spread word of its arrival across the Liberty City community,” said T. Willard Fair, executive director and CEO of the Urban League of Greater Miami.

To learn more about KIPP Miami and KIPP

Previous post PAMM takes Inside Out to Little Haiti