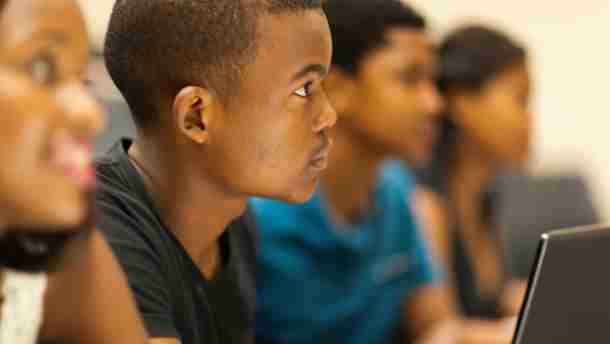 PALATINE, Ill. (AP) _ Marvin Vargas worked hard at Palatine High School to earn the grades and scholarship money that would allow him to go on to college — launching him on a journey his parents never experienced.

But even after achieving his goal, he was left with two contradictory, and hard to reconcile, perceptions of what college would be like.

One was of a place of extraordinarily intense study, where he would work even harder, and with less rest, than he had in high school.

The other was of a place of unprecedented personal freedom, where he would set his own schedule and priorities on a daily basis.

The prospect of such freedom and choice was what worried him the most as his final months of high school passed last year.

“I thought, `Would I make it through?”’ Vargas said. “I got nervous. I thought it would be very different.”

His top fear: That he would fall prey to the lure of freedom and let all his new opportunities slip away.

Then, almost as a parting gift, a new program associated with Palatine-Schaumburg High School District 211 provided him with exactly what he needed: a mentor for his college years.

The program, Excel Beyond 211, was spearheaded by Nancy Robb, even as she was retiring as the district’s superintendent last year, along with Palatine High School Counselor Sue Quinlan.

They realized that as much effort as the district spent helping students from low-income families qualify for college, it wasn’t always enough.

Nationally, only 7 to 10 percent of students from such backgrounds make it through four years of college, demonstrating that being “college-ready” requires more than just good grades and study habits.

Vargas found the mindset to succeed through his regular conversations with mentor Cesar Bonilla of Glendale Heights, who earned his Master’s degree in 2011 in accounting and now works for PricewaterhouseCoopers in Chicago.

“I think they did a real good job pairing us because we’re very, very similar,” Vargas said. “A lot of the time I just needed someone to talk to. I got comfortable (at college) really fast. About a month in, it felt like I’d been here for years.”

Vargas attends Northern Illinois University in DeKalb, the same school as his mentor. He’s focused on an education degree to become a teacher, and already has been named a Golden Apple Scholar.

If his experience of the past year could be considered an experiment on the effectiveness of the mentor program, then there were control groups all around him.

One fellow freshman on his dorm floor had excelled enough in high school to earn an all-expenses-paid scholarship to NIU, Vargas said. But she skipped classes regularly and failed out by the end of the first semester.

Others, too, seemed to be indulging much more in the freedoms of college than he was. Not knowing how poorly these students were doing academically until later, Vargas admits he might have questioned his more serious approach were it not for Bonilla’s advice.

Bonilla told him that his classes were only going to get more challenging and more important in the years ahead. It was crucial to use his freshman year as a base to develop good habits and get his grade-point average up, he advised.

“I think it’s easier to keep up than catch up,” Vargas agreed.

Bonilla, whose parents attended school only through the sixth grade, said he could have benefited from a program like Excel Beyond 211 while in college. But somehow he was able to acquire the know-how he’s now passing on.

“I found my own ways,” Bonilla said. “Maybe it was just my drive to do well.”

Excel Beyond 211 mentors will stay with their students for the entirety of their college careers, not just the great unknown of freshman year.

For student Danica Lopez, the biggest decisions of college lie ahead, after recently completing her freshman year at Harper College in Palatine.

“I think the transition from high school to college wasn’t as tough as some people say,” the Palatine High School grad said.

Nevertheless, with a decision looming on what branch of science or medicine she wants to specialize in after leaving Harper, Lopez is finding herself in need of mentor Carlota Rodelo’s advice as much as ever.

Rodelo, who like Bonilla earned a Master’s degree four years ago, is the school psychologist at District 211’s Hoffman Estates High School.

She’s pleased and proud that Lopez has made such a smooth transition to college, and believes the time they’ve spent together likely will be more useful with the challenges ahead.

Rodelo, a Carol Stream resident, also has parents who never went to college. But she found a mentor in her college adviser, a luckier and more improvised arrangement than those now benefiting from Excel Beyond 211.

Most of the 31 student-mentor teams from the first year of the program recently came together to celebrate and share their experiences so far, Robb said.

“It really does show us it has been an extremely successful first year of Excel Beyond 211,” she said. “Almost everyone who was there talked about the support. All of our mentors are returning and some have asked for a second mentee.”

There will be 28 students in the second group of the program, keeping to the original goal of approximately 30 per year established by Robb and Quinlan, who is the wife of Daily Herald Sports Editor Tom Quinlan.

Though Vargas and Lopez said they clicked particularly well with mentors not much older than themselves, Robb said a small age difference is not necessary for a good pairing. Productive partnerships were found with retirees as well.

“For mentors, you look for people who are passionate about education,” Robb said.

Members of Excel Beyond 211’s first year didn’t meet their mentors until toward the end of their last semester of high school, but the plan going forward is for introductions to be made at the start of the semester.

That’s not too soon to benefit from deeper insight into the college experience, Robb said.

There’s also a thought among the organizers that finding good mentors may not be as challenging in the years ahead.

“We think students we’ve mentored will come back and be mentors,” Quinlan said.

Next post Chipotle: Still no pork at 40 percent of restaurants