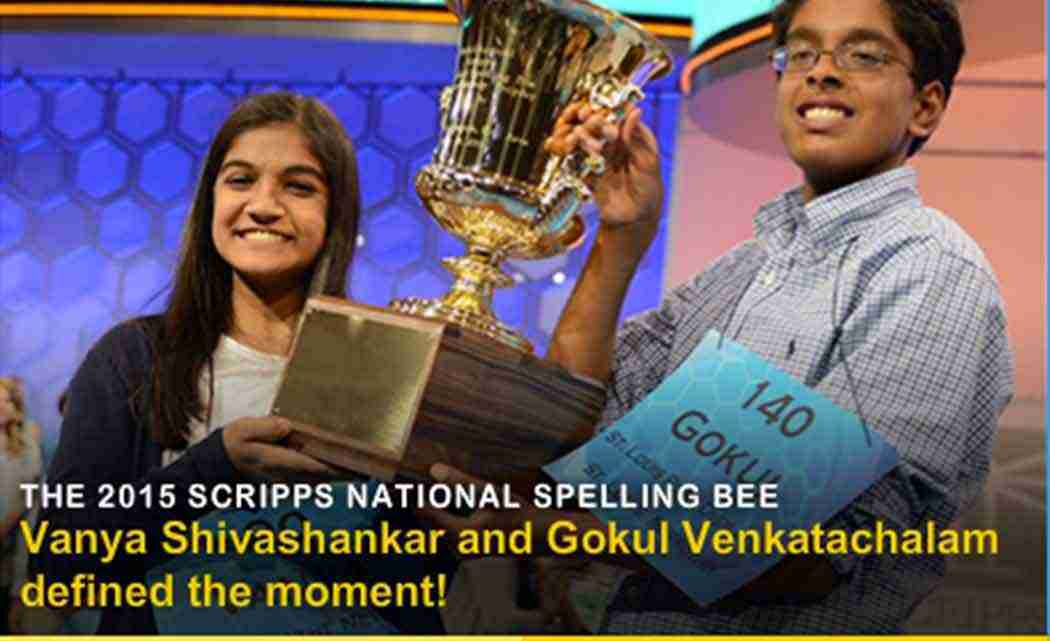 By BEN NUCKOLS
OXON HILL, Md. (AP) _ They couldn’t be rattled. They couldn’t be denied. Gokul Venkatachalam and Vanya Shivashankar had worked too hard and come close too many times not to win the Scripps National Spelling Bee on Thursday.

So they shared the title, making history in two different ways.

The bee hadn’t ended in a tie for 52 years _ until last year. Now it’s happened for an unprecedented two years running.

Vanya’s final word was “scherenschnitte,” which means the art of cutting paper into decorative designs. After being informed he’d be the co-champion if he got the next word right, Gokul didn’t even bother to ask the definition before spelling “nunatak.” For the record, it means a hill or mountain completely surrounded by glacial ice.

Asked what he thought when he got the word, Gokul said, “Me and Vanya were going to be the champions.”

Gokul, 14, of Chesterfield, Missouri, finished third last year, behind the two co-champions. He had a gruff on-stage demeanor, asking about the word’s roots and definition before chugging through the letters as if he had dinner plans.

“I wasn’t nervous,” said Gokul, a LeBron James fan who said his priority for after the bee was watching the NBA Finals.

Both are eighth-graders, so it was their last chance. Vanya was competing in the bee for the fifth and final time. Her sister, Kavya _ now a sophomore at Columbia University _ competed four times, which means the Shivashankar family has made the trip nine of the past 10 years.

Vanya, who also acts and plays the tuba and piano, dedicated her victory to her grandmother.

“Everything takes hard work and passion,” Vanya said. “That’s definitely what I put in and I know Gokul put that into this endeavor as well.”

Proving their superiority over even their toughest competitors, Vanya and Gokul went head-to-head for 10 rounds before the list of 25 championship words was exhausted.

Fourteen of the past 18 winners, including the four champions the past two years, have been Indian-Americans.