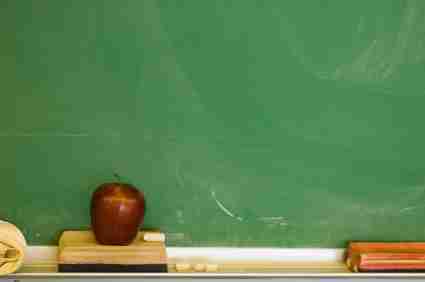 By TIM WILLERT
The Oklahoman

OKLAHOMA CITY (AP) _ Emerson High School Principal Sherry Kishore was moved to tears by the well-preserved writings and drawings on the slate blackboard behind her.

“She just stood there and cried,” Kishore said. “She said it was exactly like her classroom was when she was going to school.”

Except the blackboards uncovered recently by workers at Emerson predated Kishore’s mother by 13 years. The date, written in cursive with a piece of chalk on one of them: Dec. 4, 1917, the Oklahoman newspaper reported (http://bit.ly/1MIqUmt ).

“It was almost like a spiritual moment because people who had lived and played and worked in here … a part of them is preserved,” Kishore said. “It’s like you’re going back in time.”

Kishore’s mother, a retired second-grade teacher who taught penmanship, broke down as her daughter showed pictures of the blackboard on her iPad.

The writing on the board took her back to another time, when cursive writing prevailed and children were taught about Pilgrims and God and “My Rules to Keep Clean.”

“Today, at 85, she writes as perfect a penmanship as these ladies or whoever wrote on this board here and it distresses her that we don’t teach that anymore,” Kishore said.

Across the hall, in English teacher Cinthea Comer’s stripped-down classroom, the date written on the chalkboard is Nov. 30, 1917. Comer was particularly impressed by a drawing of a girl wearing a blue dress with a pink belt blowing a bubble out of a pipe.

“It was so eerie because the colors were so vibrant it looked like it was drawn the same day,” Comer said. “To know that it was drawn 100 years ago … it’s like you’re going into a looking glass into the past.”

Emerson, built in 1895, is undergoing MAPS for Kids renovations. Workers discovered the blackboards when they pulled existing chalkboards and cork boards off the walls to make way for Smart Boards, interactive whiteboards that use touch detection for user input.

“During renovations we find lots of hidden things, but rarely do we find kids’ work and teachers’ work,” said David Todd, MAPS Trust program manager. “We usually find broken pipes and wires … so this is a pleasant surprise.”

Todd said the city and the school district will decide how to preserve the blackboards.

As Kishore looked at a chalkboard with names like Agnes, Gladys, Homer and Mable written next to a subtraction problem, she realized some of their energy still existed.

“This is 100 years old and it was frozen in time,” she said. “It is a snapshot of what went on with people just like me and my teachers and the only difference is the kids that are here now are older than the kids who went here then.”