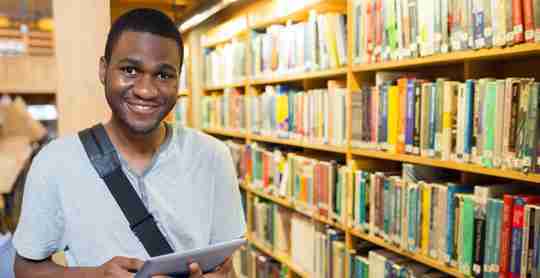 SOUTH BEND, Ind. (AP) _ Saint Mary’s College, a 171-year-old Roman Catholic women’s college, is opening its doors to men as it starts enrolling graduate students for the first time in more than 40 years.

Mike Durham of St. Louis is one of four men to enroll so far. He and his wife, Lisa, arrived Friday to begin orientation as master’s degree students in the data science program, which will be taught primarily online.

“I work full time. We have a small child. With this program, we’ll both be able to participate in the classes,” Mike Durham told the South Bend Tribune (http://bit.ly/1IfRgcC).

Saint Mary’s will remain a predominantly women’s residential undergraduate college, but is allowing men in for graduate programs because of federal regulations. The college announced two years ago it would begin offering graduate degree programs.

The programs are a doctorate of nursing practice and a master’s of science in data science, both of which will be taught primarily online, and a master’s of science in speech pathology, which will offer classes primarily on campus. Preliminary enrollment figures show seven women and one man in the nursing doctoral program and three men and three women in data science. All 24 students in speech pathology are women.

Saint Mary’s offered advanced degrees from 1943 until 1969. Called the School of Sacred Theology, the program provided master’s and doctoral-level courses. College records show a total of 76 Saint Mary’s doctoral degrees and 254 master’s degrees in theology were awarded during those years, including degrees conferred on three men.

Durham said the fact that Saint Mary’s historically has been a women’s college didn’t cause him any hesitation to enroll in the school.

Some undergraduate men already take classes at Saint Mary’s under a long-standing exchange program with neighboring University of Notre Dame.