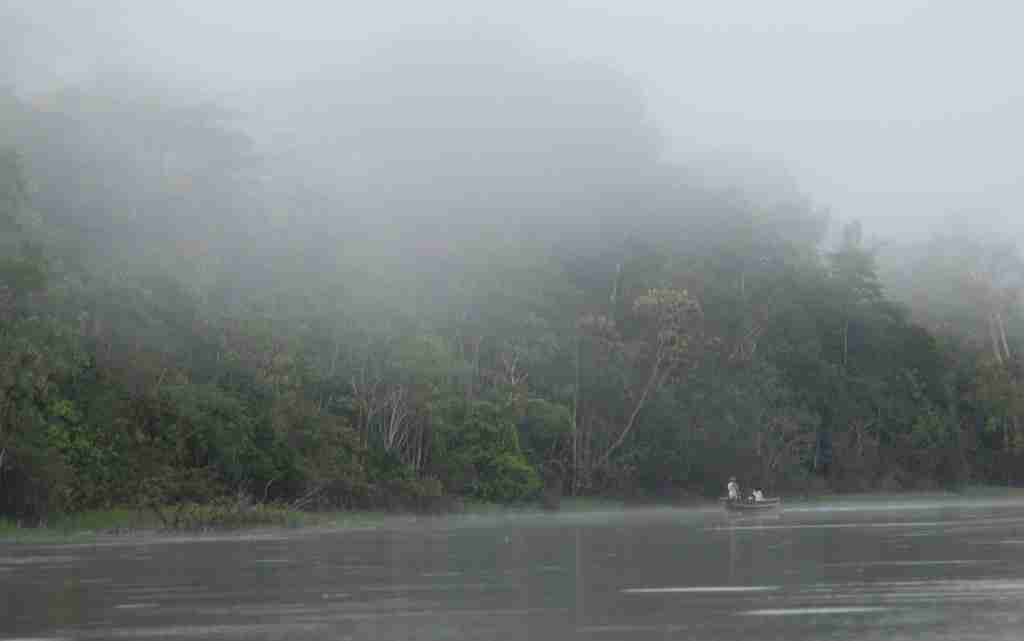 ASHLAND, Ore. (AP) – Dana Rensi was in the Peruvian Amazon city of Iquitos working her way through a Fulbright teacher exchange program when she decided to go a little deeper into the jungle, so she hopped into small canoe-type boat known as a Pequepeque – named after the sputtering sounds its engine makes – and embarked on a tour she can still describe in great detail 12 years after the experience.

What she saw were single-room buildings topped with thatched roofs and equipped with blackboards and little else. Secondary schools there are rare, but inside the one she visited, traced in chalk, was the familiar elliptical ripples and scattered orbs of our solar system. Without the educational tools that have become standard in most first-world classrooms, the rough sketch was the best the teacher could manage.

Right about then, Rensi, the library media specialist at Oregon’s Ashland High School, decided she should do something about that. This summer, she will.

Inspired by what she witnessed in the jungle during the 2005-06 school year and emboldened by technological advances which have rendered former barriers to her vision mere hurdles, Rensi will head back to the jungle in July with equipment that will give hundreds and possibly thousands of school-aged children who have no access to electricity, let alone the internet, the ability to tap into solar digital libraries loaded with educational content.

“People are really smart, they just have no resources,” she said of the schools she encountered in Peru. “And everything gets ruined because it’s so humid. And they just don’t have money for supplies, so if I can take down something that has all that wonderful information on it then it’s a huge benefit for them. They can educate themselves and get out of the cycle of poverty and have some opportunities.”

Known as RACHELs, or Remote Access Community Hotspot for Education and Learning, the digital libraries Rensi will take, once set up, will shoot out wireless signals which can be picked up by any laptop or mobile device with standard Wi-Fi capability. Rensi has just the thing for that, too – the Raspberry Pi, essentially a stripped down, bare bones computer (it doesn’t even include a case) developed to promote basic computer science education in developing countries. It retails for $35.

As her plan began to take shape a few months ago, Rensi realized she couldn’t travel 4,600 miles south toting bags of motherboards and gigabytes of valuable educational content ranging from classic literature to medical encyclopedias without first testing the equipment to make sure all the wonderful, potentially life-changing tools she’d promised would work as she had hoped.

“So, I did what all librarians do,” she said, “I checked something out.”

Rensi paid a visit to the local Southern Oregon Educational Service District and checked out a Raspberry Pi. She plugged in a foldable keyboard she’d won as a door prize at an ESD tech meeting seven years prior, hooked up a solar battery she purchased for her phone on a $10 Groupon and attached the Pi to a 51-inch TV. Lo and behold, it worked.

Rensi has partnered with Project Amazonas, a not-for-profit non-governmental organization that specializes in medical care, conservation, education, research and sustainable community development. She’ll be spending a week as a translator on a medical boat that serves remote villages along the Amazon’s tributaries then she’ll install five digital libraries at schools and libraries.

Some of the buildings Rensi plans to visit are already equipped with solar power, but for those that aren’t she’ll be purchasing portable solar panels. It’ll be a busy few weeks for Rensi. She’ll also be purchasing monitors and keyboards in Iquitos, taking several sets of $1 microscopes called foldscopes for science education and experiments, handing out reusable, washable menstruation kits from Days for Girls and distributing paperfuges, which is quite a story in itself.

By tweaking a popular children’s toy, Stanford bioengineers have developed a human-powered, string-operated centrifuge that can be used to detect diseases such as malaria, HIV and tuberculosis. It’s made from 20 cents worth of paper, twine and plastics and can reach speeds up to 125,000 rpm. The fact that it requires no electricity makes it especially valuable in the Peruvian Amazon, where centrifuges worth thousands of dollars, sans the electricity required to run them, are used as doorstops.

Rensi reached out to one of the bioengineers, Manu Prakash, who helped develop the paperfuge and was floored when he responded and agreed to meet with her. The two hit it off during their initial get-together at Stanford, and Prakash agreed to give Rensi a private paperfuge tutorial before her trip.

“Oh my gosh, the fact that he answered me in the first place,” Rensi said, in a phone interview that took place shortly after she met Prakash. “And he said, `You guys are exactly what we need to test these (paperfuges) out.’ He’s making them for people like us. He’s from India and I don’t know if he grew up poor or not but (the paperfuge) is for developing countries. There’s this whole group of people that are just out to do good things. I’m connected with some of them and I’m so happy.”

The distribution of her various goods represents only the final leg of what is a jam-packed itinerary for Rensi, who will begin her trek by flying to Mexico City, where she will meet with Juan Carlos Romero Hicks, a senator from Guanajuato and also the president of the education commissions and the secretary of the science and technology commission.

From there, Rensi is off to Guatemala to meet with the head of Mundo Posible, the Guatemalan chapter of World Possible, which created the RACHEL. Rensi will be visiting RACHEL installations around Lake Atitlan and observing how they train teachers. Finally, she’ll shove off to the Amazon.

Rensi’s sizable contribution to the educational prospects of the children in the Peruvian Amazon will not come without a cost – about $1,500. So far, she’s paid for everything out of her own pocket, but she opened a GoFundMe page recently and is hoping to win a grant.

Just to add another level of excitement, Rensi is scheduled to return to Ashland in early August, just in time to see the birth of her grandchild.

When asked if she’ll be checking in on the schools after she returns, Rensi said she’ll be doing a lot more than that.

“Oh yeah,” she said. “I’ll be going back down. This might be my retirement project. This is not a one-time shot. This is the beginning.”