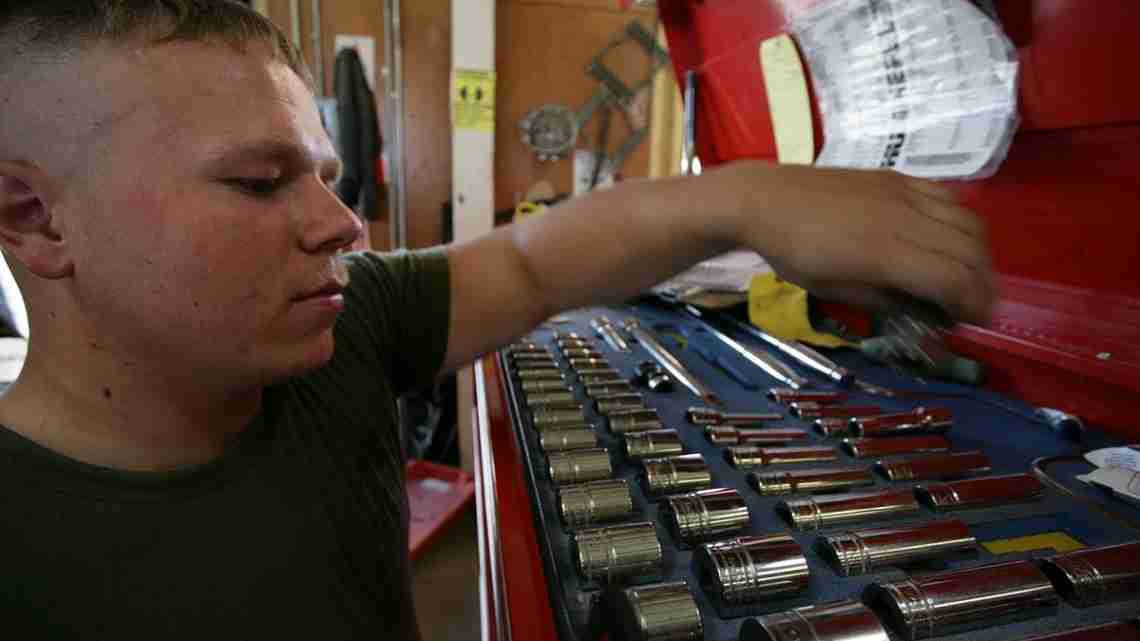 BILLINGS, Montana (AP) – Working on cars is a puzzle for Seth Hawkins.

“When it finally works, you win,” the Montana high school senior said at the Career Center. “If it doesn’t work, you’ve got to keep figuring out the puzzle.”

It’s a more complicated puzzle than it used to be, both inside individual vehicles and for the workforce that fixes them. Auto work requires more training than ever, and with an aging workforce, industry leaders fear an impending labor shortage.

It’s a similar story in many industrial trades: as schools have continued a long trend of focusing on four-year college, jobs often pigeonholed as “dirty” have garnered less interest.

The “skills gap” is often highlighted by industry and government officials as the confluence of workers needing more advanced skills to enter trades at the same time there are less people pursuing trades.

At Brown’s Auto in Billings, the average employee age is 54. The shop doesn’t have trouble finding workers now, but general manager Gordon Tryan is looking down the road.

“The biggest fear is, `how do we replace them?”’ he said.

Kids like Hawkins aren’t looking at labor reports. They work on cars because they like it, and they had a family connection that got them interested.

“It’s like an adrenaline rush,” he said. “It’s amazing what these engines can do, racing.”

Iverson evolved into a puzzle guy, but not every kid with a passion for a revving engine does.

“I get kids that like cars and kids that like to fix cars,” said Career Center automotive teacher Joshua George. “You need a kid that likes to figure things out.”

They need to be comfortable working with computers that diagnose specific problems. They need to learn where to look next if that recommended fix doesn’t work. And they need to keep up as cars evolve.

Les Smith has seen that evolution.

“Somebody that learned stuff at home with their dad and stuff is not going to have that knowledge to work on a new car,” he said at Brown’s, his workplace for the past 12 years. “You can do brakes, you can do something simple . (but) it’s all electrical now.”

“You can’t hire someone just to do one aspect of a vehicle anymore,” Tryan said.

School District 2 has focused more on career and technical education in recent years. This year the district started funneling more freshmen and sophomores toward the Career Center, which was traditionally home to older students. SD2 championed a bill that increased CTE funding by $1 million in 2015, though Montana still lags far behind most states.

The district is spearheading another funding increase proposal this year. And it recently announced the search for a new administrative position that will help coordinate district education with employer needs.

That new salary is paid half by SD2, and half by a group of local businesses and foundations, including Brown’s. Tryan sees chipping in as hopefully benefiting Brown’s, but also as supporting an education he believes in.

“The non-skilled jobs are going away,” he said, citing increasing automation. “People have to have some sort of skill. . You have to work with your hands, and I think that’s an important part of the education process.”

Senior Austin Hirsch has no problem working with his hands, but acknowledged that it’s not emphasized in society.

Automotive work “is kind of a dirty job, but it’s an honest job,” he said.

Each of the students agreed that school counselors emphasize a four-year degree, and said that they think the Career Center could have a higher profile. That’s similar to recommendations in a CTE report the district commissioned last school year, which also recommended hiring the new administrator.

“It was drilled into me, you have to go to a four year school,” Iverson said.

There have been logistical hurdles to getting more kids at the Career Center. The district needed to add several core courses, like math and English, but traditional classroom space is limited at the building.

George said he’d like to see more apprenticeships that get students a taste of real jobs in several industrial trades. Iverson currently works at an auto dealership, but it’s a gig he found himself.

“We need businesses to buy into the student,” George said.

In his shop, George credited the 2015 CTE funding increase with helping him keep tools and resources up to date.

“If that money goes away.” he trailed off.

Each of the three seniors knows that they’ll need additional automotive education before getting jobs, likely through two-year college programs. If employers are concerned about the labor pool, the students see it as a positive.

Next post How Digital Technologies Can Help Students Learn