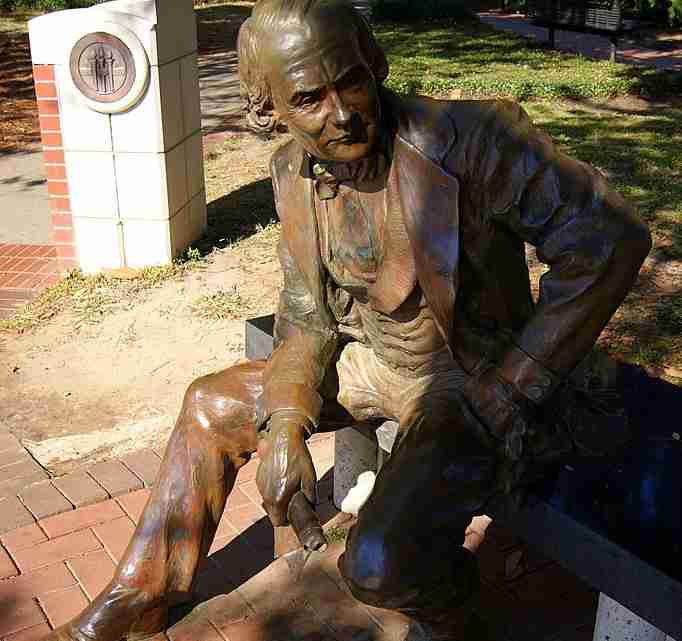 Francis Eppes statue on the campus of Florida State University.

TALLAHASSEE, Fla. (AP) – The campaign to remove the controversial Francis Eppes statue from the Florida State University campus has been reintroduced this week by Students for a Democratic Society.

On Sept. 6, the organization held a protest around the Integration Statue, which was followed by a march to the Eppes statue.

This protest came the day after an announcement that the FSU administration will be reviewing all campus statues and naming policies.

“We welcome the university administration to do a review of all statues, names and recognitions on this campus. It is important that we take a serious look at the history of racism and slavery on this campus,” an SDS member announced to the crowd during the protest.

The controversy surrounding the Eppes statue reached its peak last year when SDS placed a referendum on the Fall 2016 Student Government ballot to remove the statue and rename the Eppes building, alleging that Eppes’ legacy as a slave owner and confederate supporter didn’t align with FSU’s values. This referendum failed when 71.7 percent of students voted “no” when asked if they were in favor of removing the statue of Eppes from in front of Westcott Building.

“(Eppes) developed a white militia that would enforce brutal anti-black codes and laws,” one of the SDS members alleged. “They would go after runaway slaves. They would be there to stop any rebellions. They operated a strict police state.”

Another SDS member also weighed in on the irony of Eppes alleged actions. “You have a man who started a slave catching militia. You put his name on the Criminology building? What the (asterisk)sic(asterisk)?”

The protest remained relatively quiet until a passerby asked if SDS would advocate for the demolition of Mount Rushmore or other historical monuments that memorialize other American figures who were slave owners.

The SDS member had a strong and visceral response to the question, exclaiming to the crowd that taking down Mount Rushmore also would be warranted, adding that the people in this country aren’t ready for that type of change.

Other members of SDS quickly attempted to silence the spokesperson from behind the megaphone.

Maddie Hendrick, a junior at FSU and an SDS member, explained after the protest that she had a more dynamic viewpoint on that subject.

“I don’t think that the person who addressed that did it in quite as much of a nuanced way as I would have addressed that issue,” Hendrick said. “But I think it is important to remember that Thomas Jefferson and George Washington were slave owners and they were also the founders of this country. But this country was very clearly founded on certain principles that are not acceptable by modern standards.”

Hendrick also suggested that there are more merits to the accomplishments of Washington and Jefferson than to those of Eppes.

“Our case for Eppes is a strong and very specific case about one person who, basically in our mind, didn’t really contribute a whole lot of merit at all,” Hendrick said. “Obviously with people like Thomas Jefferson and George Washington, there is both good and bad. But with Francis Eppes we don’t see there being very many redeeming qualities or honor worthy achievements”.

SDS alleges that Eppes did not contribute in a meaningful way to the founding of the university and that his recent veneration is an attempt by the university to revise history. Since the statue, which was put up in 1999, SDS members claim that is not a historical relic and no valid argument for keeping it.

But not everyone agrees with this sentiment. Courtland Culver, a junior economics major at FSU, thinks that tearing down confederate monuments is a disservice to our history.

“To tear down statues like that, to forget history and to forget how widespread the confederacy was…I think if you forget that happened, you can very easily rationalize that it could never happen again.”

Culver is in favor of erecting a plaque next to the statue explaining Eppes’ history. “Let everyone know what he did and what he was all about. Just don’t tear down the whole thing.” Culver said.

He continues by explaining that he’s not trying to venerate Eppes or excuse what he did. But at the same time, Culver says, “to take away the good things he did…without him, we don’t even know if FSU would be around. That’s part of it too – realizing how bleak things look now, good things can come out of it. That’s an important part of history too.”

Culver was outspoken against SDS during the protest. “People on my side are kind of scared to speak out right now,” he said, “and that’s kind of why I don’t mind speaking up.”

Hendrick agrees with Culver that we should not forget history. “I mean remembering history is important, but it’s kind of the question of what kinds of history and what kind of historical narratives are we selling,” Hendrick explains. “I would support building statues of slaves, slave rebels, abolitionists and others who fought in the struggle against slavery. Because that’s the part of history that we want to remember.”

SDS is currently working on the ballot language of the referendum and aims to have a new proposal on the table Thursday.

Next post Self-driving boats: The next tech transportation race