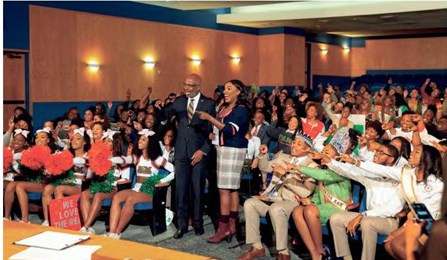 The show held in Lee Hall Auditorium on Feb. 20 was hosted by “The Real’s” Donia Duchess, while celebrity hosts Tamera Mowry-Housley, Loni Love, Adrienne Houghton and Jeannie Mai were in Los Angeles.

Students interacted with the hosts, participated in different segments and won cash during the game, “Oh Caption, My Caption!”

“I like the relationship that the ladies have because it is authentic,” said Kennedy Patton, a first-year broadcast Journalism student and faithful fan of the show.

“I also like that it’s a panel of women who look like me. I’m a minority woman who’s majoring in Broadcast Journalism and that’s a lot of inspiration for me.” “The Real’s” team of producers, including Whitney Kieser, Jennifer Malone-Brown and Molly Shebeneck, also were in Tallahassee working behind the scenes to prepare participants and the audience of more than 400 Rattlers.

“The moment I stepped on the campus, every faculty, staff and student I met had this infectious energy,” Kieser said with a laugh. “We had so much help from the FAMU team, and it was an honor to interview President Robinson and see him lead the strike cheer.”

National exposure on “The Real” allows Historically Black Colleges and Universities (HBCUs) to stand on a new platform. President Robinson said he wants viewers to see FAMU and know that it is more than an educational institution, but a place where students can become who they want to be.

“What makes our institution so special is that a lot of universities can attest to having that same array of academic programs, but we embrace our students in ways different than they might elsewhere,” said Robinson.

He added, “You don’t have to come to FAMU and convince me that you have an innate ability to be successful at whatever you choose. I know that and that’s what we expect of you. So FAMU is very special in that way. We want you to succeed. We need you to succeed because our success hinges upon your success short term and long term.”

Kieser explained that Black History Month is very special to “The Real,” and the show tries to highlight something important.

“Having our own Lonnie Love graduate from an HBCU (Prarie View A&M University) was very important, so we’ve been wanting for a long time to visit the HBCUs around the country,” said Keiser.

“FAMU has such a rich history,” she added. “The students, faculty and the legendary band we’ve heard about long before we got here. We are just so excited to be here and highlight the history here.”

The other HBCUs featured by “The Real” this month were Howard University and Prairie View A&M University.