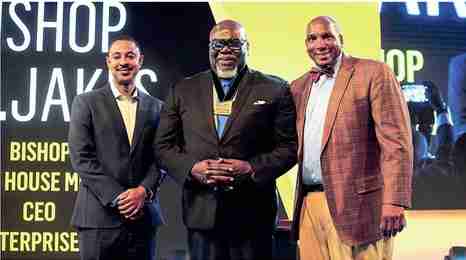 This year, the Black Men Xcel summit was topped off with a surprise announcement by the president and CEO of Black Enterprise, Earl “Butch” Graves Jr., and Bishop T.D. Jakes, who was honored on opening night.

After a riveting conversation with Graves Jr. on August 30, Jakes announced that T.D. Jakes Enterprises L.L.P and Black Enterprise will partner to produce the SOAR Empowerment event series, a one-day liftoff event for health, wealth, and how to take your life and business to the next level that is based on Jakes’ bestselling book, “Soar.”

The first stop will be in Los Angeles, Feb. 9, with the second stop in Atlanta, April 6. One of the main focuses of the initiative is teaching participants how to create multigenerational wealth for themselves and their families.

“We want people to have information and access to opportunity. But this is not only about finances but soaring in every aspect of your life. Together, we can make a difference. I’ve grown weary of waiting for the government to give us what we need. We want to surround ourselves with people who want to touch people,” said Jakes.

Graves and Jakes said the two entities will complement each other.

“We do events and we do events well,” Jakes said, referring to his hugely successful ‘Woman Thou Art Loosed’ and

MegaFest conferences. “But Black Enterprise has a relationship with business leaders.”

After accepting his award, Jakes told the audience he got his entrepreneurial spirit from his father, who owned a janitorial service.

“My strongest image is of my father with a mop and bucket in his hands. And with that, he announced that he was starting his own business with no capital, no employees, nothing. But when I blinked, he had 60 employees.”

Jakes said he became an entrepreneur because he didn’t want the church to decide how much he made.

“I didn’t want to be at the mercy of a church board to decide how much money I make. I wanted to be the master of my life. I promised my wife I would make things better,” he said of his humble beginnings. Today, his for-profit entity is worth millions due to his books, movies, productions and other endeavors. He said

his business enterprise has been around even before he started the Potter’s House, his church, which opened in 1996.

In addition to Jakes being honored by the magazine, two other leading men were recognized. Kenneth I. Chenault, former CEO and Chairman of American Express and Olympic Gold Medalist Tommie Smith, 74, who protested during the National Anthem at the 1968 Summer Olympics in Mexico City.

Smith, holder of 11 world records simultaneously in track and field, made national headlines at the age of 24, standing atop the podium to receive his gold medal when he and fellow athlete John Carlos both raised black gloved fists during the entire playing of the national anthem.

Smith and Jemele Hill, former ESPN anchor were on a panel discussing blacks in sports at the summit. Hill made headlines last year when she called President Donald Trump a white supremacist and he went on a Twitter storm calling for ESPN to fire her. Hill told the audience she was surprised her comment made news because she thought it was “known” that the president was racist.

“I was surprised it was even news. I thought after Charlottesville, we all agreed on that,” Hill said about the President’s remarks after a white supremacist march in Charlottesville, Virginia where he said both sides of the issue were to blame for the violence which led to a woman’s death.

For more information on the SOAR Empowerment Tour, visit blackenterprise.com/soar.