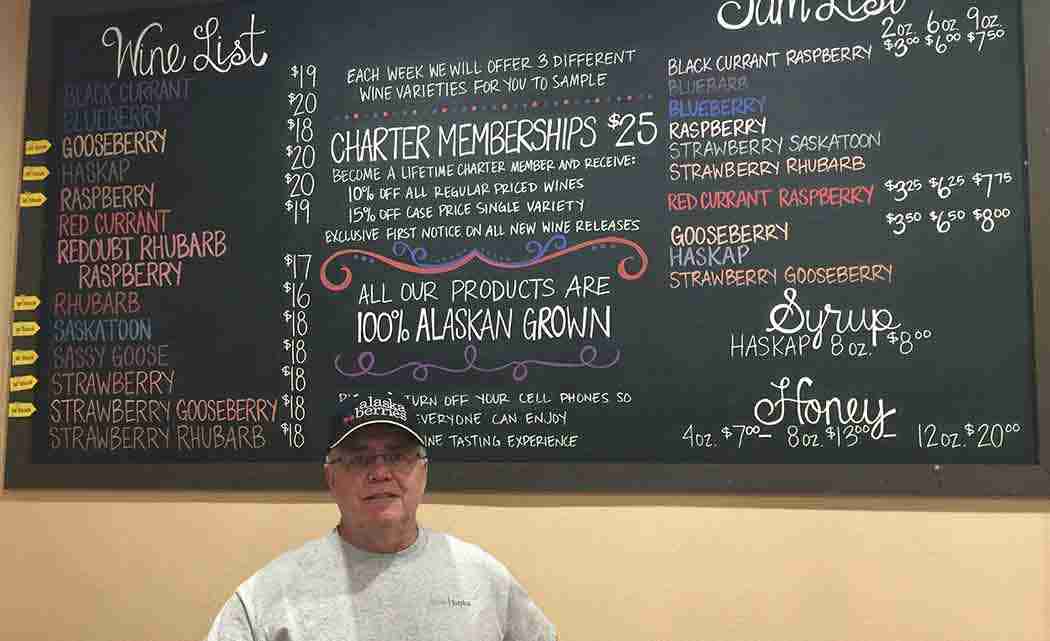 KENAI, Alaska (AP) _ Alaska Berries, which started out as a hobby for Brian Olson and his wife Laurie Olson, has expanded into a full-fledged business.

Located on West Poppy Lane between Soldotna and Kenai, Alaska Berries sells a variety of jams, syrups and wine, all of which are produced from fruit grown on the Olsons’ four-acre farm.

A number of berry varieties are grown on the farm, including those with household names such as strawberries, blueberries and raspberries. However, Olson says that while he always tries to improve on old staples, he also wants to try growing new types of berries.

Olson is particularly excited about the Haskap, a berry with Japanese origins.

“I knew that I wanted to grow something that nobody else was growing,” he said. “So, through research many years ago, I found that (in Japan) this plant grew and I wanted to try it here.”

Olson said that his farm was the first to produce commercial Haskap jam and syrup in America.

“That berry is going to become the new super-berry in the U.S. within ten years, is my prediction,” Olson said. “It’s a one-of-a-kind berry _ it’s not one dimensional in flavor. It’s a multi-flavored berry.”

Due to the popularity of the jams and syrups, Olson wanted to expand to make wine. Two and a half years ago, Alaska Berries was licensed to make and manufacture wine.

“The reception of our wine since we’ve opened up has been tremendous,” Olson said. “(Local customers) have sustained our farm for 10-12 years through the plant, fruit and jam purchases. Now, they come out and they are just beaming _ they are excited. They take ownership and say, `We have a winery in our area.”’

To accommodate the increase in demand for wine, Alaska Berries opened its wine tasting room in October. There, customers can sample and purchase an array of wines.

Olson is not only proud of the winery’s success, he is also proud that his wine has strictly local origin.

“We’re an estate winery, but just with berry wines,” Olson said. “We don’t import any products to use in our wine making. We’re the only winery in the state that is 100 percent Alaskan grown, and we are certified by the Division of Agriculture.”

Olson said that having a berry farm in Alaska has been difficult, especially with unpredictable weather.

“Farming in Alaska is the most challenging environment in the entire country,” Olson said. “That is a statement that I’ll stand behind. It’s very difficult, very challenging and very expensive to be commercially producing something off of the land here.”

“We don’t go out in the wintertime and baby (the berries),” Olson said. “They have to make it. If they don’t make it, we try a different variety. Right now, we’re locked in. Everything we have has been very successful for quite a few years.”

While creating Alaska Berries has been hard work, Olson said it was worth the effort.

“It was a challenge, and we knew it would be, but that didn’t stop us,” Olson said. “Was it worth it? Absolutely.”

Next post Hawaii's high gas prices dip below $3 a gallon