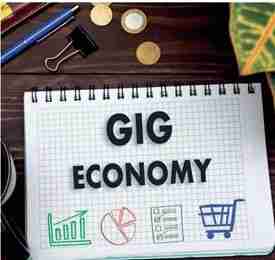 WASHINGTON (AP) – The “gig” economy might not be the new frontier for America’s workforce after all. From Uber to TaskRabbit to YourMechanic, so-called gig work has been widely seen as well-suited for people who want the flexibility and independence that traditional jobs don’t offer. Yet the evidence is growing that over time, these jobs don’t deliver the financial returns many expect.

WASHINGTON (AP) – The Federal Reserve is set this week to raise interest rates for a third time this year to prevent the economy from growing too fast. But with President Donald Trump’s trade fights posing a risk to the U.S. economy, the Fed may soon be ready to slow its hikes.

BEIJING (AP) – The United States and China have imposed new tariff hikes on each other’s goods. They gave no sign of compromise in an intensifying battle over technology policy that is weighing on global economic growth. The United States went ahead with a 10 percent tax on $200 billion of Chinese goods. Beijing responded with 5 and 10 percent on $60 billion of American imports.
AP INVESTIGATION: DRUG PRICES GOING UP DESPITE TRUMP PROMISE

NEW YORK (AP) – President Donald Trump has made reducing drug prices a key promise, and on May 30 he claimed drug companies would be announcing “massive” voluntary drug price cuts within two weeks. Those cuts didn’t come, and an Associated Press analysis of brand-name prescription drug prices shows it’s mostly been business as usual for drugmakers. Even Health and Human Services Secretary Alex Azar, the administration’s point person on drug prices, concedes it will be quite a while before drug prices fall.

WASHINGTON (AP) – Employers who offer paid family and medical leave to their workers earning up to $72,000 a year can receive tax credits under the new tax law, the government has affirmed. The Treasury Department issued guidelines Monday for the tax credit, which is available to employers for leave paid this year and next. The credit expires in 2020. The idea behind it was to encourage companies to offer paid time to their employees for family responsibilities.

FRANKFURT, Germany (AP) – European Central Bank head Mario Draghi says he expects inflation to rise in the 19 countries that use the euro as a stronger job market pushes up wages. Draghi’s comments Monday before the economic and monetary committee of the European Parliament in Brussels indicated the bank continues to think the recovery is strong enough for it to phase out its bondpurchase stimulus at year end.

FRESNO, Calif. (AP) – Electric vehicle advocates, environmental groups and California officials blasted the Trump administration’s proposal to roll back carmileage standards at a Monday hearing in a region with some of the nation’s worst air pollution. The session in California’s Central Valley is the first of three events by the U.S. Environmental Protection Agency and National Highway Traffic Safety Administration to gather public comment on the mileage plan.

NEW YORK (AP) – Global stock markets slip after the US and China officially put new tariffs on each other’s goods and China reportedly rebuffed a plan for talks with the U.S. Industrial and basic materials companies fall. Energy companies along with the price of oil after OPEC decided against increasing its output further. It was a busy weekend for deals, with cable and internet provider Comcast winning an auction for British pay TV company Sky.