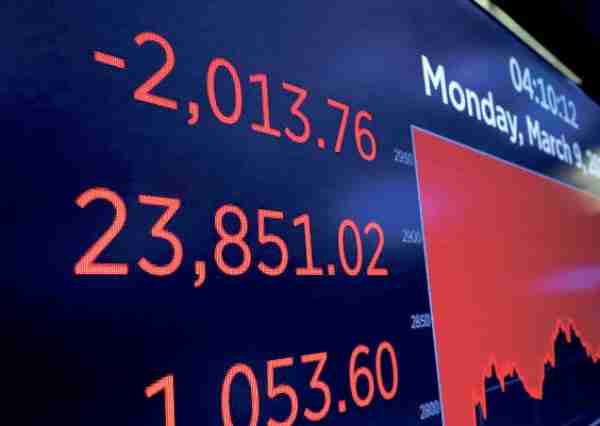 NEW YORK (AP) – The Dow Jones Industrial Average sank 7.8%, its steepest drop since the financial crisis of 2008, as a free-fall in oil prices and worsening fears of fallout from the spreading coronavirus outbreak seize markets. The sharp drops triggered the first automatic halts in trading in two decades. The price of oil plunged nearly 25% after Saudi Arabia indicated it would ramp up production after Russia refused to production cutbacks in response to falling demand. Europe fell into a bear market. U.S. stocks are now down 19% from the peak they reached last month. Bond yields plumbed new lows as investors sought safety.

THE OIL MARKET MELTDOWN AND ITS GLOBAL IMPACT

FRANKFURT, Germany (AP) – Oil prices are plunging after Saudi Arabia started a price war against Russia. The Saudis tried to get the Russians to cut oil production to keep prices from falling even more due to the coronavirus. Russia didn’t agree. Now the Saudis are cutting prices and saying they’ll increase production. That puts pressure on Russia, but analysts say Russia’s industry can survive for quite a while at lower prices. And Russia may like the idea of lower oil prices hampering a key competitor: the U.S. shale oil industry. Consumers, meanwhile, may see lower prices at the pump.

ANXIETY GRIPS COMPANIES ACROSS THE WORLD AS VIRUS SPREADS

WASHINGTON (AP) – Since breaking out of China, the coronavirus has breached the walls of the Vatican. It’s struck the Iranian holy city of Qom and contaminated a nursing home in Seattle. And around the world, it’s carrying not just sickness and death but also the nagging anxiety and paralysis that can smother economic growth. From Florida, where the CEO of a toy maker who can’t get products from Chinese factories is preparing layoffs, to Hong Kong, where the palatial Jumbo Kingdom restaurant is closed until further notice, businesses are struggling. The virus has grounded a British airline, and it’s sunk a Japanese cruise-ship company.

Ethiopian investigators are mostly blaming Boeing for last year’s crash of a 737 Max jet shortly after takeoff, saying in an interim report that there were design failures and inadequate training for pilots. The update a day before the anniversary of the crash pointed to the role of a new flight-control system that Boeing installed on the Max that repeatedly pushed the nose of the plane down. All 157 people on board were killed when flight 302 crashed into a field six minutes after takeoff from Addis Ababa. Every Max jet worldwide was grounded within days of that crash.

WASHINGTON (AP) – Federal regulators are warning seven companies to stop selling soaps, sprays and other concoctions with false claims that they can treat the new coronavirus _ or keep people from catching it. There are no approved treatments for the virus, and none are likely to be ready for months or years. The Food and Drug Administration and the Federal Trade Commission sent warnings on Friday to the companies, which are based in the U.S., Canada and the U.K. The warnings were announced Monday. Nearly all the companies complied by then, with mentions of the virus or products to treat it removed from their websites.

AON PLANS TAKEOVER OF WILLIS TOWERS IN $30B ALL-STOCK DEAL

LONDON (AP) – Aon is buying rival benefits and risk consultant Willis Towers Watson in an all-stock deal valued at around $30 billion. Aon said Monday that it will give Willis Towers stock owners slightly more than one Aon share for each of their shares in what amounts to a 16% premium to the stock’s closing price Friday. The announcement comes about a year after Aon said it was no longer considering a buyout of its rival. The companies expect the deal to close in the first half of 2021, pending shareholder approval. Aon CEO Greg Case will run the combined company.

CINCINNATI (AP) – The Consumer Financial Protection Bureau has filed a lawsuit against Fifth Third Bank, alleging the bank’s employees opened fake accounts for customers in order to meet aggressive sales targets. The federal regulator alleged that the bank knew its employees were opening fake accounts from at least 2008 and until 2016, the same year that Wells Fargo admitted its own employees had opened fake accounts to meet aggressive sales goals. Cincinnati-based Fifth Third says the CFPB’s lawsuit was unnecessary. The bank says it had already investigated the allegations and found 1,100 accounts were opened fraudulently out of 10 million existing accounts.

NEW YORK (AP) – The nation’s largest private employer said Tuesday that a worker at its store in Cynthiana, Kentucky, tested positive for the COVID-19, the disease caused by the new coronavirus. The worker is receiving medical care and her condition is improving, according to an internal memo.

As part of the new emergency leave policy, Walmart said that hourly workers who work in a store, club, office or distribution center will receive up to two weeks pay if they’re required to quarantine by the government or by the retailer. Workers who have a confirmed case of the virus will also receive two weeks of pay. If they are not able to return to work after that time, additional pay may be provided for up to 26 weeks for both full- and part-time hourly workers.

WE WELCOME YOUR LETTERS

South Florida Times welcomes and encourages our readers to comment on opinions and other content in the newspaper and generally. Letters should be no more than 300 words and are subject to being edited for grammar, brevity and clarity. All letters become the property of South Florida Times. Include your name, address and phone number and email your letter to News@SFLTimes.com or mail it to South Florida Times, 2701 W. Oakland Park Blvd. Suite 320, Fort Lauderdale, FL 33311, Attention Letter to the Editor.