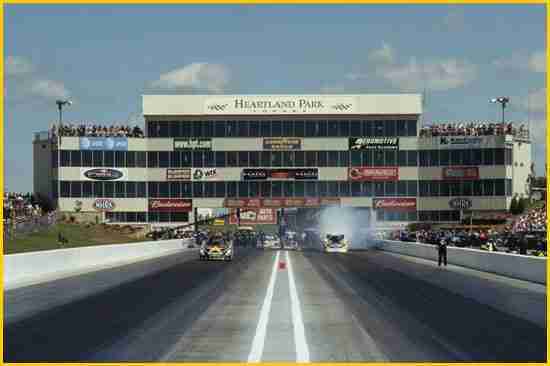 TOPEKA, Kan. (AP) _ A northeast Kansas man is hoping an ambitious crowdfunding effort will help him buy a Topeka racetrack with an uncertain future.

Dan Canady, a Holton dirt track racer, has started a GoFundMe crowdfunding effort to raise between $5 million and $10 million to buy Heartland Park Topeka. Canady is soliciting donations in an effort to see how many people would be interested in investing in the park.

“I don’t want the park in the wrong hands, and we can’t just let something like that sit there,” he told The Topeka Capital-Journal (http://bit.ly/1Ht9YPQ ).

Canady, 34, plans to use the money he raises to negotiate with track operator Raymond Irwin and Jayhawk Racing LLC.

“I’ve been thinking about this for months and talked to a lot of racers who said they’d be interested in donating,” he said.

Heartland Park Topeka opened in 1989 and became one of the NHRA’s most popular drag racing venues in the 1990s, serving as the site of two major events. Recently, however, Heartland Park Topeka has had only one NHRA event each year. After the racetrack’s finances took a turn for the worse in recent years, the city proposed to buy Heartland Park and expand a sales tax district that would have paid off bonds related to the track.

But Topeka’s governing body voted against the plan.

Canady, who also manages an auto parts stores, says if another deal is finalized before he raises the money, he’ll return the money to donors. And, if that isn’t possible, he will donate the money to a charity that cares for wounded racecar drivers.

CoreFirst Bank & Trust has loaned Irwin and Jayhawk Racing LLC millions of dollars since he began managing the track in 2003. Between $1.5 million and $2.1 million is still owed to the bank. Kurt Kuta, president and CEO of CoreFirst, said there’s considerable interest in the park.

“It’s looking positive the park will remain a racing venue,” he said.