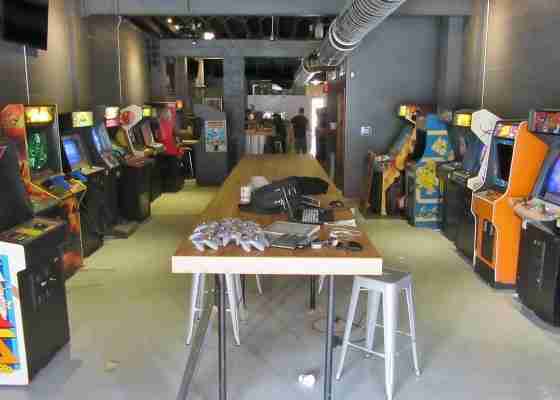 By KEVIN JOY
The Columbus Dispatch

COLUMBUS, Ohio (AP) _ When Benjamin Morgan pitched his idea for an arcade to investors, the particulars of his upscale game plan didn’t quite click.

His Old North Arcade is an adults-only hangout north of Ohio State University stocked with 30 vintage titles and 20 craft-beer taps. The venue targets nerd-chic enthusiasts of both Missile Command and microbrews.

Still, the modern scene offers plenty of focus on the past.

“It brings back a lot of good memories, actually … staying up all night with your friends when you were, like, 10,” said Linden resident Aaron Wagner, 26, after challenging his younger brother, Dan, to a bout of Mortal Kombat (Aaron lost).

Morgan, who until recently made a full-time income playing poker, calls the environment “cool, dark (and) sexy.”

Old North Arcade is the third such venture to open in Columbus, following 16-Bit Bar + Arcade and Ethyl & Tank.

From the first day that 16-Bit hit the “power” button, lines outside the downtown hot spot have regularly formed on weekends _ with mixed-generation crowds gathering to play Teenage Mutant Ninja Turtles; mingle over thematic libations (a Bill Nye or Steve Urkel, anyone?); or enjoy “Wayback Wednesday” nights, featuring 1980s flicks screened on televisions.

Ethyl & Tank, a bar and restaurant in the Ohio State University area, devotes upstairs space to a dozen arcade games.

The area growth and hype mirror that of retro gaming venues nationwide.

The trend is undeniable, said Anthony Dandrea, co-owner of Ground Kontrol in Portland, Oregon _ widely recognized as one of the first establishments anywhere to offer the bar-arcade combination.

“There is a gold-rush mentality we didn’t see five years ago,” he said. “It’s every man-child’s dream to re-create this environment.”

Troy Allen, owner of 16-Bit, expected the concept to catch on in Columbus.

“It takes people back to when they didn’t have a care in the world,” said Allen, 42, a Dublin resident.

Last week, he opened a 16-Bit _ his third overall _ in Cincinnati’s evolving Over-the-Rhine district. He launched a second location last summer in the Cleveland suburb of Lakewood.

Locally, additional arcades (with some offering entry to people of all ages) are set to plug in soon.

Geiger, 44, owner of an educational game-design company, has been amassing a cache of almost 100 games for years. His collection includes Tron, Punch-Out! and the sought-after Dragon’s Lair, a 1983 title that uses an internal laserdisc to produce what, at the time, was landmark interactivity.

He’s in the process of moving 20 machines from his pinball collection _ including Guns N’ Roses and Addams Family variations _ to the new site.

Arcade Super Awesome has operated for the past five years as a monthly gathering for friends and Facebook fans out of a storage room in his company’s office near Grandview Heights.

“Just seeing that flourish gave me the idea to take it to the next step,” Geiger said.

Unlike Old North, Ethyl & Tank and 16-Bit _ whose machines are free _ Arcade Super Awesome will require payment with quarters.

On deck, too, is Level One Bar + Arcade, which is expected to open this summer near Worthington.

Meanwhile, Shilah Griffeth of Westerville is raising cash and securing games for Blinky’s Revenge (named after the ghost and Pac-Man archenemy).

The 41-year-old, who hopes to open the “upscale family-entertainment venue” in the fall, values the social element of an arcade.

“Playing an Xbox at home just isn’t the same,” said Griffeth, who works in the pharmaceutical industry.

Meanwhile, competition for those hulking consoles that once were readily found on Craigslist and at flea markets has intensified of late.

Noted Geiger, who as a college student in the 1990s bought games for as little as $30 apiece at auctions and from then-shuttering arcades: “It’s definitely changed the collector’s market.”

Depending on their rarity, he said, the machines nowadays can run two to three times more than the $100-to-$300 price range of a few years ago _ and many require repair and cleaning.

Such concerns matter little to gamers eager to relive their youth.

“There’s definitely a different strategy and logic. Most video games today are like a job.”

In an age in which games are replete with realistic graphics, storylines and music, the quirky quests of yore _ and their limitations _ still hold a curious appeal.

“They didn’t have graphics like they do now; the designers had to be incredibly creative,” said arcade owner Morgan.

“Take Dig Dug, for example. You’re like this little freaking cosmonaut. You go around and shoot into these other little guys and pump them full of air to explode them and escape.

“It must be some kind of acid trip.”