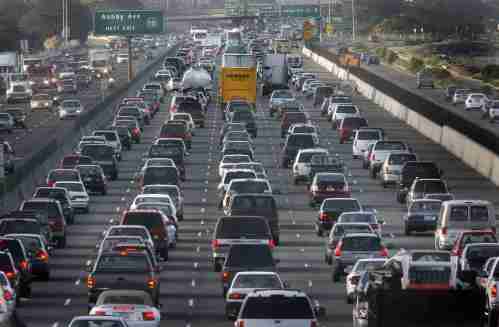 By JOAN LOWY and JUSTIN PRITCHARD
At 4:35 a.m. each weekday, Stan Paul drives out of his Southern California suburb with 10 passengers in a van, headed to his job as an undergraduate counselor at the University of California, Los Angeles. Some 80 miles and 90 minutes later, the vanpoolers finally arrive to start their workday.

On the return trip, Los Angeles’ infamously snarled traffic often stretches their afternoon commute to three hours. Since Paul joined in 2001, he has spent roughly 11/2 years aboard the vanpool and traveled far enough to complete a round trip to the moon.

“These super commuters, they don’t just give you a day’s work,” he said. “They give you their lives.”

Transportation experts say Paul’s long journey offers a warning for the future, when traffic rivaling a major holiday might someday be the norm for many more Americans.

“If we don’t change, in 2045, the transportation system that powered our rise as a nation will instead slow us down,” the Department of Transportation said in report earlier this year titled “Beyond Traffic.”

“Transit systems will be so backed up that riders will wonder not just when they will get to work, but if they will get there at all,” the report said. “At the airports, and on the highway, every day will be like Thanksgiving is today.”

The projections were based on a population increase of 70 million people and a 45 percent increase in the nation’s volume of freight.

That prediction has opened a growing divide between cities such as L.A. that have been making huge investments in new transit options and other regions that have been unable or unwilling to get ahead of the crisis, including the fast-growing South and Southwest.

In some of the nation’s oldest cities in the Northeast and Midwest, urban planners don’t have to deal with an expanding population, but they are hampered by the need to repair roads and rails when they would rather build new futures for Philadelphia, Pittsburgh, St. Louis, Cleveland or Detroit, to name just a few.

The issue extends beyond big cities. Americans living in more sparsely populated areas are affected every time they head to cities for ball games, business, shopping or air travel. Within 30 years, the Department of Transportation projects, drivers will have to tolerate stop-and-go conditions or slow traffic for some period of each day on more than a third of U.S. highways.

To avoid this slow-motion catastrophe, the nation would have to act decisively _ and soon. Expanding mass transit or building new freeways takes years, even when money flows freely, which is rarely the case these days.

AVOIDING MISTAKES OF THE PAST

In many fast-growing metro areas, transportation officials are trying to avoid becoming the next L.A., Houston or Atlanta _ places struggling to undo previous decisions that led to mind-numbing, time-wasting, fuel-burning traffic jams.

Faced with traffic congestion so notorious that it has become a cultural touchstone in movies and comedy repertoires, L.A. has embarked on a transportation building binge funded largely by a sales tax voters passed in 2008.

New rail lines are extending to Beverly Hills, the airport and other places that haven’t had such service in decades. Regional officials call the $14 billion being spent on transit and new freeway lanes the nation’s largest public-works project.

In some ways, the building boom harkens back to the region’s past. Until the rise of the automobile, the city offered an extensive network of streetcars. The current rail renaissance is possible because planners preserved old rights of way, allowing them to build new lines where old tracks had been ripped out or buried under concrete decades ago.

Similar challenges loom over the Atlanta metro region, where population growth by 2040 is expected to result in a daily average congestion speed of 18.8 mph _ about 10 mph slower than today. The cost of wasted time and fuel will more than triple, from $874 per capita to $2,945, according to the U.S. Transportation Department.

Some cities have turned to bus rapid-transit systems, which give buses the right of way, permission to operate at faster speeds and sometimes their own lanes. Those systems are already in place in Boston, Cleveland, Miami, Las Vegas, Los Angeles, Pittsburgh and Seattle. Planners in Jacksonville, Florida, hope to have more than 50 miles of bus rapid transit in place by 2019.

In Washington’s Maryland suburbs, officials have been pushing for a 16-mile light-rail line to connect more affordable neighborhoods with jobs in the growing downtowns of Bethesda and Silver Spring, as well as the University of Maryland’s College Park campus. But after more than a decade of planning and debate, the line’s future remains uncertain.

On Thursday, Maryland Gov. Larry Hogan released a transportation plan that significantly reduces the state’s share of the $2.4 billion project. The Republican said he was not opposed to mass transit but said the Purple Line project had been poorly conceived and was too costly.

Instead, he announced a much greater investment in funding for roads and bridges throughout the state.

THE QUEST FOR CONSENSUS

Elected officials and transportation professionals generally agree on the nation’s intensifying traffic congestion but are divided about how to address it.

The Obama administration leans heavily toward getting people out of their vehicles, a solution preferred by many urban planners. New highway lanes aren’t enough, the theory goes, because they will simply attract drivers who had been taking other routes and encourage more sprawl. Soon congestion will be as bad as ever.

One alternative is to encourage people to trade suburban amenities for more densely developed neighborhoods where they can easily take transit, walk or bike to jobs, stores and entertainment.

“As the population surges, we’re going to have more bottlenecks, so giving people another option is really important,” Transportation Secretary Anthony Foxx said in an interview. Rail transit can be a release valve for highway congestion, he said, taking enough vehicles off the road to help traffic move more smoothly.

Although ridership for trains and buses is at a 50-year peak, it remains only a tiny fraction of all trips nationally.

Conservative lawmakers in Washington and many state capitals tend to advocate road building, which better serves their primarily suburban and rural constituents. They question the effectiveness of enlarging big-city rail systems, which typically carry people from suburbs to jobs in the urban core, when so much commuting today is from suburb to suburb.

Nearly all the growth in commuting traffic can be attributed to the growth in commutes by private vehicle. Census data on commuting show that between 1980 and 2013, the proportion of workers driving alone to work increased from 64 percent to 77 percent. Carpooling dropped from 20 percent of trips to 10 percent, and public transit declined slightly from 6 percent of trips to 5 percent.

Some drivers lament that they don’t have any other options.

Micaela Magee, a 20-year-old North Carolina State University student majoring in design studies, fights traffic each morning as she drives from her home to a satellite parking lot, then switches to a bus to take her to campus.

She could drive all the way, but on-campus parking is expensive and in short supply. To her, paying a half-cent sales tax to support light rail doesn’t sound like much of a hardship.

“It would be really nice not to have to rely on cars,” she said. “Taking the bus can be unreliable. It’s nothing like Europe where everything is super on time.”

But for most Americans, expanding transit systems is not a priority, even though more than 80 percent of the population lives in urban areas of 150,000 people or more, a share that is expected to keep growing as fewer people settle in rural areas.

A majority of Americans, 53 percent, think the government should increase spending on roads and highways, according to an Associated Press-GfK poll conducted in April. The same proportion would rather live in a single-family suburban or rural house with more land, even if it means longer commutes.

A smaller share, about 4 in 10, says transit spending should be increased. And 44 percent would choose an apartment or smaller house in a walkable urban area with access to public transportation or a short drive to work.

Living in a more densely populated place doesn’t necessarily mean an apartment in a high-rise, said Rich Barone, director of transportation programs at the Regional Plan Association in New York, which specializes in urban planning. It could be a neighborhood where offices, shops and restaurants are only five or 10 minutes away by foot.

One of the tallest obstacles to ambitious transportation improvements is the lack of reliable funding. The 18.4-cents-a-gallon federal gasoline tax hasn’t been increased since 1993, and the revenue it brings in isn’t enough to cover current highway and transit spending, let alone increase it.

Raising the gas tax is unpopular with voters, as are other user-fee proposals such as putting more tolls on highways or taxing motorists by the number of miles they drive.

Unable to find a politically acceptable solution, Congress has kept highway and transit programs teetering on the edge of insolvency for much of the past six years. Instead of committing tens of billions of dollars to pay for transportation programs, lawmakers have repeatedly resorted to budget gimmickry.

States count on federal money for a share of their transportation spending, ranging from about a third in New Jersey to 93 percent in Alaska, where there are long distances to cover and fewer people to pick up the tab. Amid Washington’s inaction, states are trying to raise more money on their own, mostly through gas- or sales-tax increases, or imposing tolls. Uncertainty over how much federal aid they can count on has caused some states to delay or shelve construction projects.

Whatever plans are adopted, technology is sure to play a big role in helping traffic and commerce flow. Already, smartphone apps track GPS-equipped buses and alert riders when one is approaching so they don’t waste time waiting. In some urban areas, drivers receive congestion alerts on their phones and can see traffic in real time through highway cameras linked to the Internet.

In coming decades, cars and trucks might wirelessly “talk” to each other and to traffic lights and other infrastructure, directing drivers to routes that avoid congestion. They may be able to follow each other in close formation on highways, packing more vehicles into what is now empty space. Automakers are testing the technology on Detroit-area roads.

NO RELIEF IN SIGHT

For now, the distant plans for more trains and better highways don’t offer much to millions of Americans who endure long commutes year after year.

Stan Paul, who begins his morning ride to UCLA in Riverside, experimented a few times with public transit, but an hour-plus ride on a commuter train ends near downtown Los Angeles, and to get from there to his office would take at least another hour by subway, bus and foot.

Eventually, a subway extension will connect the city’s Union Station to UCLA, so Paul could transfer from the train. The only catch: By the extension’s expected 2036 completion date, he’ll be retired.