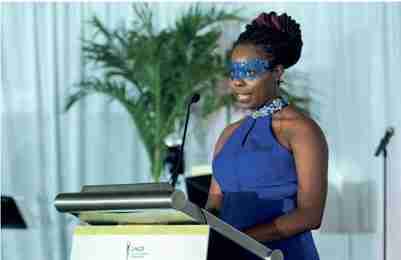 Francesca Occena, a graduating FMU student, shared how receiving a scholarship helped her complete her studies at last year’s gala.

MIAMI GARDENS, Fla. – Florida Memorial University (FMU) will be in the spotlight on Saturday, Nov. 4 as they continue “Celebrating Diversity, Embracing Culture and Inspiring Unity during their Annual President’s Scholarship Gala. The star-studded, black tie and red carpet extravaganza will occur at 8 p.m. on the university’s grounds at the FMU Wellness Center Complex.

One of the prominent historical fundraisers for the year, the gala will feature two of Miami’s finest and most accomplished young, gifted and talented leaders: Richelle Williams, executive pastor of Jesus People Ministries Church International and former beauty queen, and Cainon Lamb (known professionally as Lamb), Grammy-nominated record producer and hip hop artist.

Both natives of Miami, Williams and Lamb will serve as co-hosts of the event. FMU’s administration said they are happy to have successful South Florida natives participate in the event.

“We are delighted to have the support and involvement of these two accomplished and highly acclaimed community leaders,” said Marcus Burgess, Vice President for University Advancement at FMU. “Their enthusiasm and energy will help to elevate our purpose, mission and goal to enlighten and empower our community and our students.”

A theatre minor, Williams traveled abroad to study the art of theatre in London, England. The daughter of one of South Florida’s most legendary leaders, the late Bishop Isaiah S. Williams Jr. Williams made history as the first and only woman chaplain of the City of Miami Gardens Police Department and has won numerous awards for her service.

Lamb’s involvement with music started in the church at the early age of four. As the son of a pastor, his raw talent landed him the role of drummer in the church band.

Throughout his youth, he continued to develop his musical talents and athleticism.

An alumnus of Miami Norland Senior High School, he excelled in both music and sports and eventually earned a full scholarship to Florida A&M University and became an All-American wide receiver.

In 2014, Lamb and his business partner Bigg D formed 12th & Collins Entertainment and this year he added recording artist to his list of accolades after being featured on Missy Elliott’s release, “I’m Better!”

As South Florida’s only Historically Black College and University (HBCU), FMU is passionate about educating the world and committed to helping every student achieve his or her highest potential in life. On a mission to build leadership, character and service among it’s students, FMU’s Annual Gala showcases students’ efforts and recognizes some of the best and brightest in the South Florida community.

A limited number of tickets to attend the scholarship gala are still available and priced at $150 per person. Sponsorship packages, ranging from $2,500 to $25,000, are also available.

The evening will also include performances by FMU’s very own Student Jazz Ensemble and Chorale.

For more information on the Annual Scholarship Gala, contact Ameena Shaheed at 305-626-3611 or visit www.fmuniv.edu.