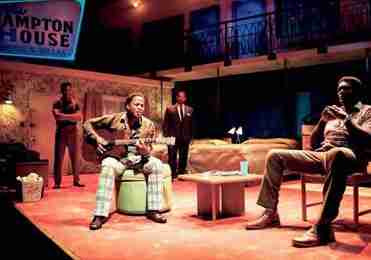 PHOTO COURTESY OF OF STIAN ROENNING.

“The City of Miami Beach has always valued the transformative power of art and understood the positive economic impact of culture and creativity,” said Mayor Dan Gelber. “We are immensely grateful the Knight Foundation has decided to make such a substantial commitment to advancing our many institutions.”

The list of the 2018 Knight New Work Miami Beach winners include:

O Cinema: $1.5 million to create South Florida’s first independent film center by supporting the cinema’s purchase and the renovation of a permanent home.

O, Miami at The Betsy: $1.25 million to create a new home for poetry in the Americas by supporting a partnership between O, Miami Poetry Festival and The Writer’s Room at The Betsy-South Beach.

Miami New Drama: $750,000 to elevate and sustain the production of original, critically-acclaimed theater in Miami by further strengthening the organization’s work through support for casting, staffing, technological upgrades, and a deeper focus on long-term financial sustainability.

For Miami Beach, an international magnet for arts and culture in South Florida, it is the largest win for any local municipality.